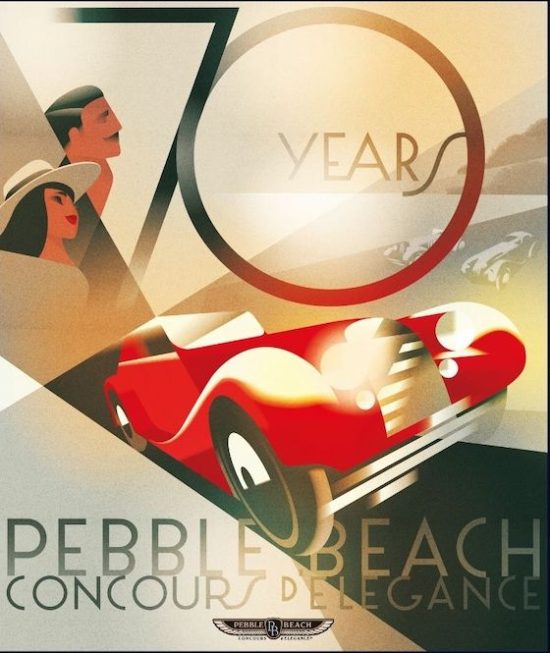 The cover is printed on silk paper—looks sharp, feels good, but you can watch the edges getting scuffed.

“This is certainly a story of competition, but it is also a story of camaraderie and a shared commitment to cars. They act as the catalyst for our connections—across continents and generations, as well as occupations and expertise.”

If you were waking up from a decades-long sleep and found yourself at the Pebble Beach Concours in 2021 you would have been disoriented: didn’t I see some of these cars win already? Why, yes you did, and it is only because 2021 was a nice round anniversary year that former Best of Show winners (which are selected from among the First Place winners in their respective classes) were invited to return. There is a deeper meaning to this than simply seeing how well the concours queens have aged or what new clothes they might wear (we are still talking about cars, folks): the types of cars, both in regard to coachwork and genre, as well as the level/degree of restoration are representative of what has stayed the same and more often what has changed at this world-class extravaganza. 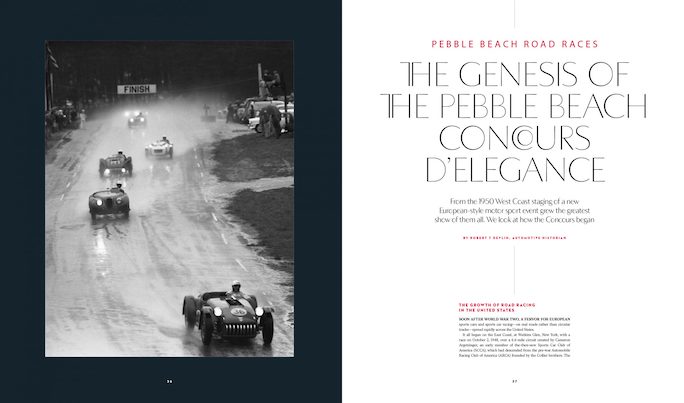 The chapters, or essays were each written by separate people (named in the byline) and a deep roster of marque experts (unnamed) tended to the car descriptions.

There are almost too many “themes” this book tackles but that is meant as a positive. Of the various PBC commemorative books this one casts the widest net and also peels back the curtain at least a little bit on such polarizing topics as car selection or the two-tiered judging system that, for better or worse, are at the heart of this concours. If you are new to the concours world the very variety in this book will make your head spin about as much as actually attending in person ($425 for the concours proper), especially if you also delve into the myriad of surrounding events known as Monterey Car Week—auto shows, rallies, auctions etc. etc. etc. 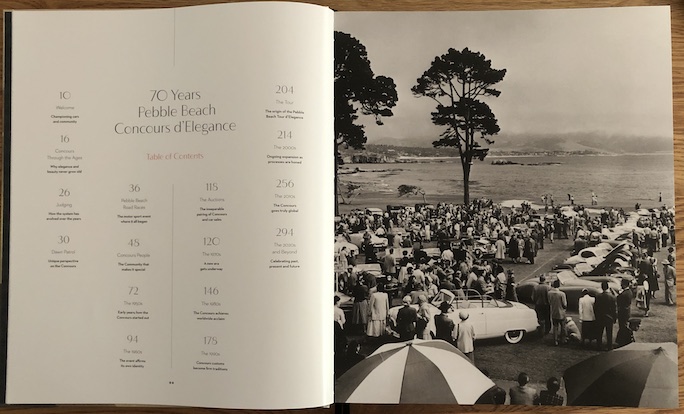 The PBC has sat out only two years, once for weather and once for Covid.

The whole idea of a concours—especially Pebble Beach where, as comedian and serious car guy Jay Leno likes to quip, “millionaires can compete with billionaires . . . and win!”—is hardly a value-neutral topic. Neither the book nor this review can meaningfully untangle it. The one topic that would surely redeem a concours in even the eyes of skeptics is the charity/fundraising component, and of that practically nothing is said. 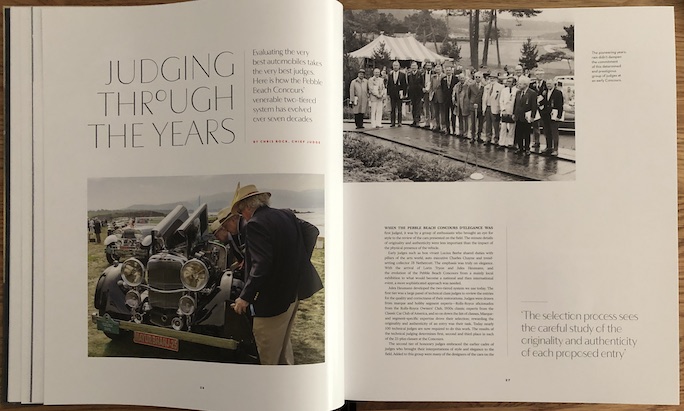 Take a look at the head on the left page. Noticed the “o”? Now observe how the three lines are staggered on the left. Somebody thought about the typesetting here! If you’ve seen the UK magazine Magneto you won’t be surprised to hear this book was done by the same outfit.

Among the several introductory essays the one by Julius Kruta who was once Head of Tradition at Bugatti and here writes as a member of the Selection Committee will be particularly approachable to concours newbies because he explains its purpose and genesis, the different approaches to judged car shows in Europe and America, and the role restoration (as in “degree of”) plays in the upper echelons of the collector car world. For people in the thick of it this is an explosive topic, for everybody else probably more of an abstraction. The book obviously strives to be relevant to both these groups and everyone in between but it will be the PBC insiders, especially those who show cars, and show cars here repeatedly, who will cherish the book. The reason for that is reflected in a core theme PBC chairwoman Sandra Button lays out in the opening of the book: family, and community. 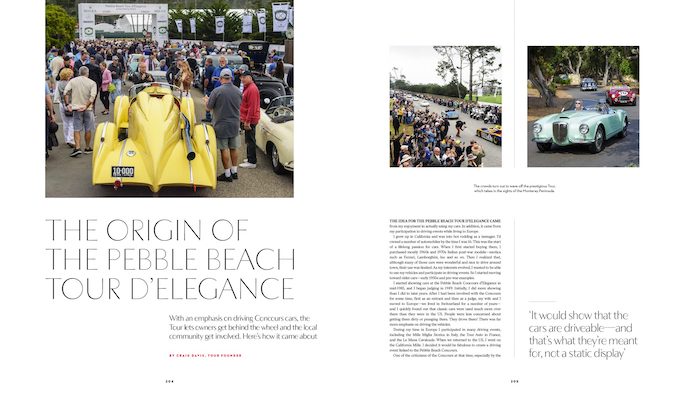 Long story longer: what you take from this book, what expectations you have of it depends on whether you are a concours junkie or someone who just wants to spend a few hours ogling pretty cars. If nothing else, the book is a proper, sweeping recap of how a once obscure local car show that started as a sideshow to a race grew—through circumstance and attentive leadership—into the powerhouse it is. It’ll take attentive and probably repeat reading to spot the many changes that have kept the concours relevant over the decades, from small things such as moving away from favoring in the early days the relatively new cars (for instance, in 1955 Phill Hill didn’t think his 1931 Pierce-Arrow would even be welcome on the show field but then it ended up winning Best of Show, thereby becoming the first “classic” and starting a decades-long trend—which down the road would cause much gnashing of teeth when seemingly no postwar car could ever crack that ceiling) to big items that fundamentally changed the collector car MO such as instituting the Preservation Class. And, would you believe, “authenticity” was once actually a bad (well, unimportant) word here?

The story unfolds, obvious enough, chronologically but is interspersed with special topics (People, Auctions, The Tour) but also “Advertising Features” provided by concours vendors and/or book sponsors, as well as straight ads. Thanks to the latter the oversize (ca. 13 x 15″) and lavishly produced book can sell at a laughably low price of $90 for the standard edition. (A Publisher’s Edition limited to 500 slipcased copies is $175/£135; a leatherbound Chairman’s Edition of 250 copies signed by Sandra Button in leather clamshell case is $599/£415.) 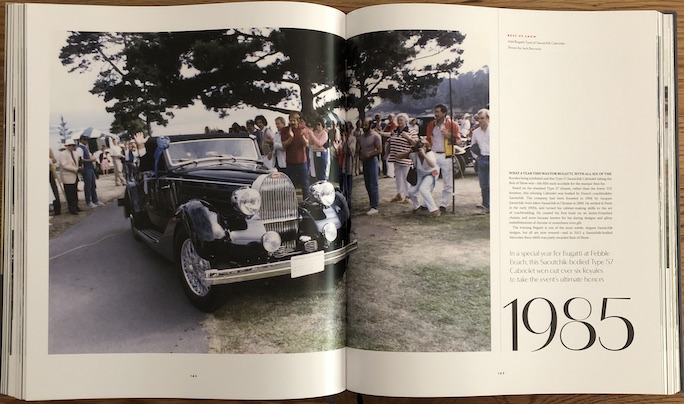 Not all the photos are photographic gems but if the priority is to show the car in the time and place the text talks about—on the field or the ramp—then the selection will naturally be limited.

For what it’s worth, the one-volume 50th Anniversary book (but not the two-volume 60th) is still available from the PBC Store for $500 (the Deluxe Edition for $1700); it is noteworthy not least for the fine PBC history written by the late automotive historian Beverly Rae Kimes. It also lists all first, second, and third place winners of all Automotive Class Competitions as well as the winners of all Special Awards. 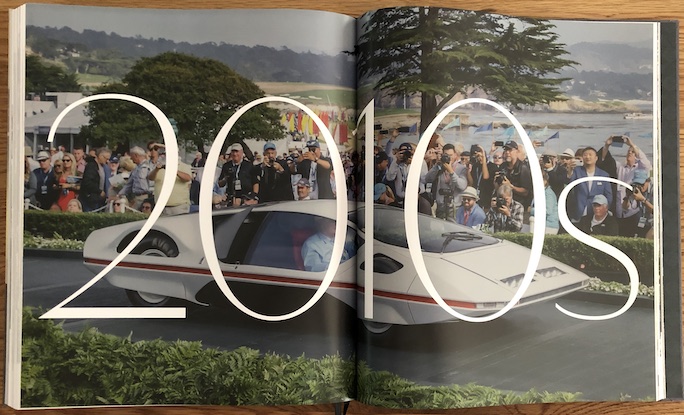 By and large there is no more bespoke coachwork these days so what may future PBC contestants look like?

Around the World in a Napier – the Story of Two Motoring Pioneers »
« The Complete History of U.S. Cruise Missiles