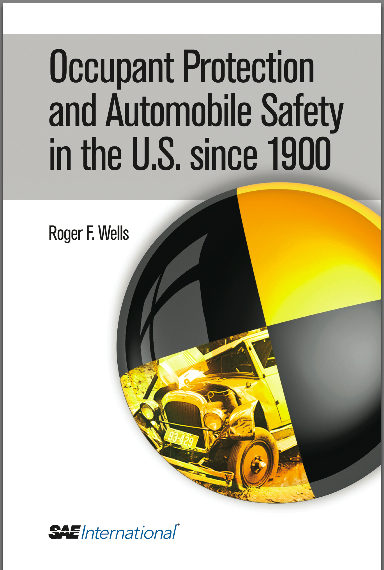 This book falls somewhere in between being a popular book for everyone, and a well-written history text for engineers, lawyers, and legislators. Not enough photos of cars and car crashes are included to make this a popular book, and not enough charts and in-depth analysis for a scholastic text. Hopefully, that means that anyone interested in automobile safety, and that should be all of us, will find it a worthwhile purchase. The data inside is interesting and presented in a way that makes for easy reading. Even the descriptions of the agencies created and laws the government passed concerning auto safety are rendered painless, concerned more with the intent of the law than the law itself.

The story starts in Ireland in 1869 when a passenger, not wearing a seatbelt, was thrown from a steam omnibus and crushed to death. The first US death occurred in 1899 when a New York City real estate salesman stepped off a streetcar and got clocked by a passing electric cab. By 1900 the yearly death toll was up to 36, and by 1972 a staggering 54,000 were killed and two million maimed. Driving killed more people in 1972 than the Vietnam War. Sobering to think about, particularly when we were all out in the street protesting the Vietnam War, but no one except Ralph Nader and a few other lone voices were objecting to the slaughter happening every day on our highways. Luckily, times have changed a bit, and highway safety now enjoys the general backing of the car-buying public. Seatbelts, airbags and intelligent interior and exterior design have drastically reduced the highway death toll and saved hundreds of thousands of lives.

Until 1924 there were no rules for vehicle safety. The then-secretary of commerce and soon to be US president, Herbert Hoover, chaired the first National Conference of Street and Highway Safety. He opened the conference by remarking that recently a friend of his had been run down on a sidewalk “by a wooden-legged driver who never drove before.” The confused driver had hit the accelerator instead of the brake in a bizarre case of unintended acceleration. It was not until the advent of low-cost electronics in the 1990s that complicated but effective computer-controlled vehicle stability programs became common, along with all the airbag crash-sensing accelerometers and other sensors that are rapidly taking driving responsibility away from erratic human behavior. It’s only a matter of time before self-driving cars become commonplace and consumers expect accident-free service from their vehicles—all due, really, to the efforts to produce safe cars that will ultimately, on a simple numerical basis, make going to war more dangerous than driving.

A great deal of the author’s text is devoted to describing the evolutionary development of mechanical items that led to safer cars, including tires, transmissions, springs, independent suspensions, headlights, speedometers, bumpers, safety glass, electric starters, automatic chokes, brakes, standardized pedal placement, shift patterns and more. Also discussed are non-mechanical items that promoted safety over the years including intelligent highway design, driver and vehicle licensing, and standardized highway signage across the country. Although a few of these developments are pictured, the vast majority are not, which is unfortunate due to the interesting topics being discussed. Two hundred additional photos would transform this book from a specialized publication into a book that the general public would enjoy reading. It would open many eyes to the inherent safety problems generated by 250 million US vehicles all fighting for the fast lane on a daily basis.

The books starts with a Dedication, followed by a Table of Contents, an Introduction, and five Chapters divided into timeframes covering: pre-1900, 1900 to 1924, 1924 to 1934, 1935 to 1955 entitled “The Laissez-Faire Years,” and 1955 to the present entitled “Science, Technology, and Safety.” The chapters are followed by an Afterword, References, and an excellent 23-page Index. After the Index is a single About the Author page that fills us in on Roger Wells’ background. He has an undergraduate mechanical engineering degree, in addition to an MBA and PhD in business management. Wells holds five US Patents and has published articles and technical reports in Sensors Magazine and SAE International journals. He has worked for several internationally known companies and has served as an expert witness in defense of lawsuits relating to airbag deployments.

Posted Under: Automobiles, Technology | Author: Bill Ingalls | No comments yet