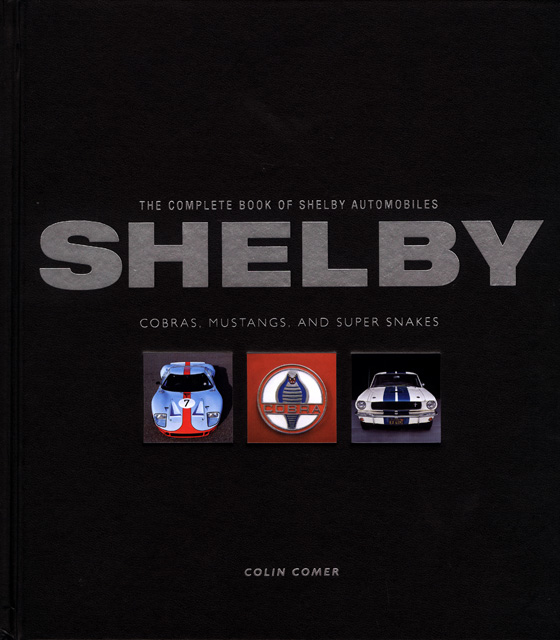 This is a good book saddled with only a fair title. It should have been called simply The Book of Shelby Automobiles. Complete, it isn’t.

Given that the Shelby shelf in my library measures over three feet in length, it is difficult to conceive that this one-inch-thick, 256-page book can be called “complete”, which infers a truly comprehensive history. At least it does include, to varying degree, every car bearing Shelby’s name, even those from Chrysler, and others who plastered it all over some pretty miserable cars. As the author frankly admits, “There were great cars and cars we’d rather forget.” But full credit to him for at least covering “every car ever touched by Shelby”. No other book has done so. That said, this book can generate a love-hate reaction from a reader, who may love the detailed history of the Mustang derivatives, for instance, but hate the space “wasted” on Chrysler K-cars and the like. In fact, the book could be sub-titled The Good, The Bad, and The Ugly. It covers all of Shelby’s models, right down to his scandalous use of old chassis numbers to build 427S/C “completion” cars.

The subject here is strictly Shelby automobiles, not Shelby the man, Shelby the team, or Shelby the company. The focus is on the hardware, not on the people who created and used it. (Someday a factual and authentic biography of Shelby will appear, but given his recent penchant for lawsuits, that presently seems unlikely.) Here, for example, you’ll get a good look at the Dragonsnake and Slalom Snake Cobras and a welcome reminder of Shelby’s short-lived Toyota 2000GT race program. The scope of the book even includes the 2005-06 Ford GT and Mustang variations up through the 2009 model year.

Comer, a long-time Cobra and GT350 owner and vintage-racer, goes into great detail about certain minute aspects of the cars but sometimes almost ignores others. For instance, he expertly describes 427/428 cylinder heads but initially neglects to make clear the basic fact that 427 Cobras were coil-sprung instead of leaf-sprung. Perhaps he assumes that enthusiasts will already know this, but that’s not always the case in a book that appeals to folks new to Shelby.

Still, a writer with hands-on experience can produce a better book than an armchair researcher, and that’s the case here. One of this book’s strengths is that it was created by a dedicated and experienced Cobra/GT350 owner who truly knows and understands the cars he’s writing about. Another strength lies in the details not found in other Shelby books, especially those delineating all of the Cobra and GT350 variations. This is a book you’ll enjoy reading—and worth the $45 price—but in the end it’s a good book that could have been great. I want to tuck a copy under my arm, go to the author, and say, “OK, that’s a good start; now let’s make it better.” Add a few interviews—Shelby, Remington, Gurney, Cantwell, Gerber, Iacocca, Brock, Spencer—or at least throw in a few pithy quotes. Add more on the oft-ignored Dodge program, the SCCA spec racers, and the more recent Shelby products. Maybe throw in a chapter on restoration, vintage racing, even the clubs.

Two editorial and design gripes: first, like many other recent books, this one would benefit from better editing. For instance, in Shelby expert Rick Kopek’s interesting chapter on leaf-spring competition Cobras, the abbreviation “SAAC” should be “SCCA”. The Shelby American Automobile Club didn’t exist in the 1960s; the Sports Car Club of America did. Second, the excellent mixture of new and old photographs, mostly in color, include too many that are left uncredited. When will book designers realize that photographers deserve proper recognition for their work? Print the credit alongside the photo, please.

Wisely, Comer dedicated his book to Phil Remington, the amazingly talented and enduring Shelby American craftsman and engineer who truly made the Cobra and GT40 not only viable but competitive.

Summing up, we have here the first real overview of all Shelby street and race cars, from 1963 through 2009. While it will appeal to new enthusiasts, even experts will find tidbits of useful and entertaining information, though for an in-depth history they will have to expand their bookshelf.

Posted Under: Automobiles, History, US | Author: Frank Barrett | No comments yet