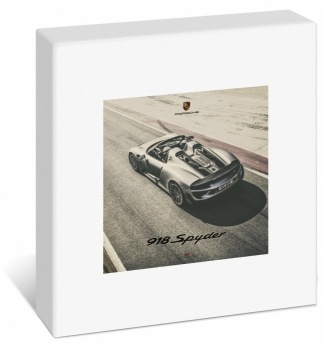 “If you look closely at it, you can see all the people who doggedly pursued their vision to turn the impossible into a reality: those brilliant developers and engineers from Weissach and Zuffenhausen, those select few to whom the 918 Spyder is dedicated and those who will own one. They must all be crazy—and in the very best sense of giving free rein to their lust for life.”

(English, German ) Production of the 918 copies of the 918 Spyder which started on 9/18 (of 2013) is scheduled to end in July 2015—half the cars were sold before it was even launched and by now all are spoken for. If you missed getting one you have an extra $845,000 lying around, so get this book instead! Its production too is limited, to 1800 copies, and it is as entertaining and clever and single-minded as the car is. 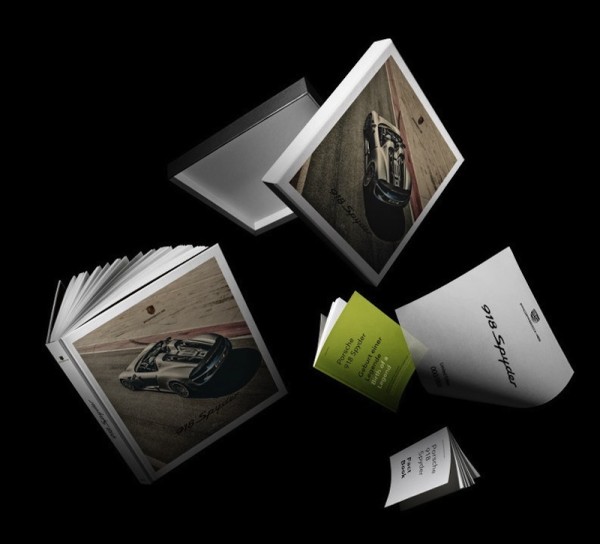 If you’ve been absent from the automotive scene since 2010 when the 918 was first shown as a concept at the Geneva show—after an absurdly short five-month scramble so secret that few even at Porsche knew it was on—you may not know what a marvelous, innovative, game-changing machine this is. It is unique—but not alone. How can it be one but not the other, you ask? Two answers. In 2010, Porsche had been the first to publicly show a hybrid hypercar but within hours of its official launch in 2013, McLaren presented their P1 and Ferrari the LaFerrari. (And while the new for 2016 Acura NSX will also have a hybrid gas-electric powertrain, it really only dabbles in the sort of universe-bending ultra tech found on the other three, which is why it’ll cost only $150K.) So, even though these three hypercars have things in common—plug-in hybrid, mid-engine, dual-clutch tranny, exotic materials, awd, price (!)—each is unique because each company phrased the question that got them started differently, meaning each took a different path to accomplish goals that look similar. 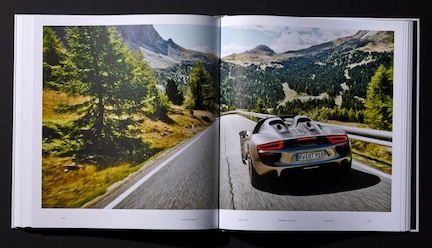 Porsche can, especially after the other cars showed their cards, rightly claim that, in engineering terms, only its solution is the most rational answer to what will be the pressing problem of the future: sustainability. How to give a combustion-engined car unprecedented efficiency, build and run it with minimal environmental side effects, but without giving up performance. 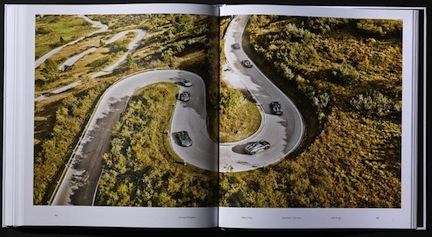 Books could be, and must be and will be, written about the fantastically complicated engineering and philosophy behind this car and especially the timeline (right after VW took over and Porsche had everything to lose, or to win). But this is not that book. It doesn’t want to be that book. Cars at the level of the 918 are not just cars—like Concorde was not just a plane or the Eiffel tower not just a pile of sticks—but an expression of man’s mastery of his domain. There is a rousing, emotive, even, yes, spiritual dimension that looks beyond nuts and bolts. Think of this book as you would a symphony instead of a formula. The composer puts a certain note here and another one there, in a subjective and ultimately arbitrary manner, so as to convey a mood, stir the soul, take you somewhere.

Subjectively, you may not “like” how the composers of this book create that mood, and you wouldn’t be alone. Book awards judges will almost certainly not “get” it. But objectively, the craft it manifests, the commitment to an idea of favoring certain goals over others, the courage to design and write and photograph just so, those are things that command respect. 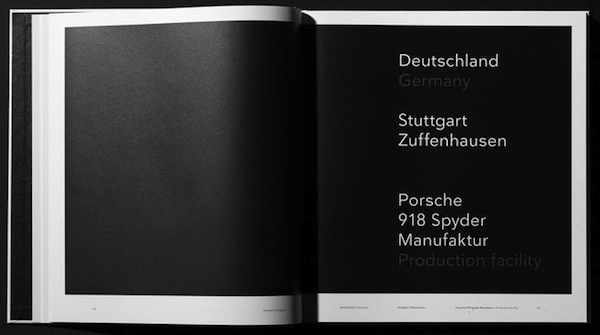 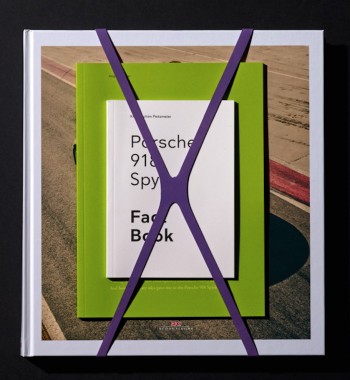 There are three motors in the car so maybe that’s why there are three books in this set. They’re all a different size and therefore come in a box, not a slipcase, and are bundled into a stack held together with a crossbrace-shaped rubber band. Fun already, no?

The two booklets contain all the text. The smallest (4.5 x 6.5″) one is the Fact Book and contains, divided by assembly or function, basic technical and performance specs along with deftly delivered narrative by Porsche expert Peitzmeier. 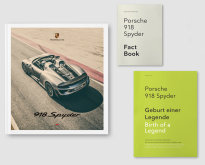 The green booklet (there is a reason for this color) is 7 x 9″ and titled Birth of a Legend, Visiting the Places Where Contemporary Automotive History Was Made. Written by Pander, a journalist, it offers a look behind doors normally closed to outsiders: board room, design office, prototype fabricator, the auto shows, the Porsche construction facility, and finally the car itself for a drive. So, from engine mapping to turnaround times and the different colors of the lug nuts on the sport edition to owners’ impressions and even setbacks everything is covered— 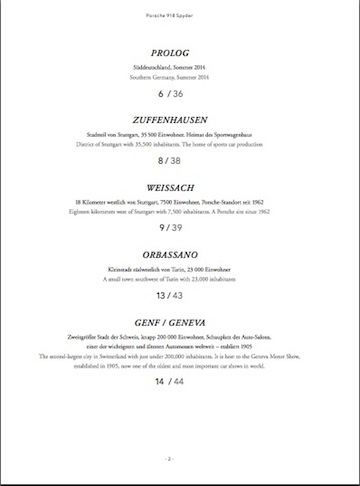 not in exhaustive detail but with sufficient clarity to color the picture with which the big photo book opens: “The Porsche 918 is a shining beacon. It is proof that the automotive world in the 21st century is still brimming with advances and innovation.”

Think of the 918 what you will, debate its specs until you’re blue in the face, but that preceding sentence is the key to understanding the car’s place in the world and to embracing, cherishing the enormity of what science and emotion can create. 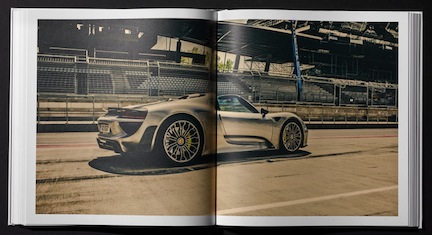 The big book is big (roughly 11 x 12″) because it is the canvas for the imagery of Munich photographer and designer Stefan Bogner. In the Introduction Porsche’s Andreas Henke who had masterminded the 2010 Geneva unveil and later sold his bosses on the idea for this book says that the photos were to be “as unconventional as the 918 Spyder itself: no artificial light, no studio, no rendering.” Photographers will probably wonder if that implies that the painterly quality (diffusion of light, softness of line, color tonality) evident in many photos was achieved in the camera at the time the photo was taken? 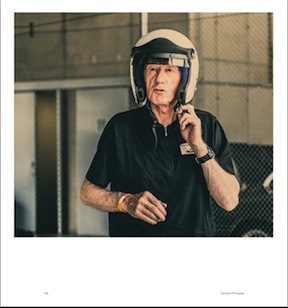 Several pages each present various “stations of the cross,” from rolling chassis to assembly by hand, to testing on various circuits and roads, the Nürburgring world record, and an early customer outing with seven 918s. Each of these segments is introduced with just a few words that constitute the only text in this volume. They do identify other historic Porsches that make the occasional appearance (956, 962, 906) but not personalities (cf. Mark Webber, Walter Röhrl). Oddly, there is no photo of the 917—even though Porsche has several at the museum—to which the 918 is specifically positioned as a successor.