The Adventurous Motorcyclist’s Guide to Alaska 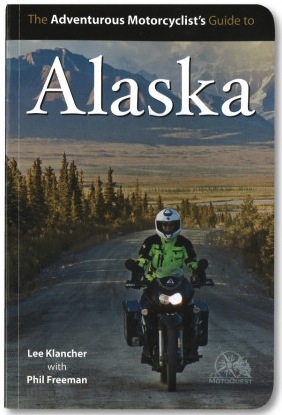 by Lee Klancher with Paul Freeman

You do not have be a motorcyclist to enjoy this book. Or adventurous. Or even anything more than an armchair traveler. It’s nice to just read and look at without any yearning to join the bugs-between-their-teeth crowd.

Of course, if you are a rider, and the Far North is on your itinerary, this book is your absolutely essential guide and as indispensable as your tire repair kit. The Alaska Division of Motor Vehicles says, laconically, “Alaska is not always the most forgiving environment for motorcycle riding” and right they are. Even if you are a veteran rider with a few notches in your belt, Alaska conditions even at the best of times present unusual challenges such as the ubiquitous metal-grated decks with their longitudinal grooves and wood-deck bridges along the Alaska Highway and connecting routes.

Writer and photographer—both of which he has taught at the Minneapolis College of Art and Design—Lee Klancher has been there and done that. That, and a few other things that qualify as “extreme”—piranha fishing in the Amazon, anyone? Thirteen books and hundreds of magazine articles later he’s nowhere near done, and as proprietor of his own publishing house he has to dance to no one’s tune but his own.

It is safe to assume that anyone who counts “drinking beer” as one of his hobbies won’t write a stuffy book. He is joined in this effort (writing/beer drinking) by Alaska native and long-time global motorcycle tour guide Phil Freeman who runs MotoQuest (formerly Alaska Rider Tours) in Anchorage. Before you even open the book you’ll spot a sure sign that it’s produced by someone who understands motorcycle travel: its front corners are rounded so that you can stuff it into your pack without crunching the front edge. The paper too is substantial enough to withstand some abuse. 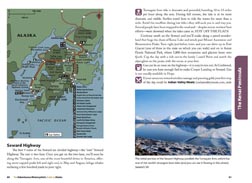 From trip preparation to getting to Alaska (an adventure in itself), the book covers everything: maps, cell phone service, useful gear, accommodations, sights from expected to offbeat, sample route plans with almost turn-by-turn instructions, and pretty much every accessible road. If you don’t know which type of bike will suit which roads, the book covers even that! I’d bet that even people who have been there already will read this book and wish they had had it before.

The writing is witty and fun, the descriptions extraordinarily detailed, the photos good (and often enough really good), the layout user-friendly—no stone is left unturned to make this as engaging a read as it is a reliable guide. There’s even an index.

From personal experience, the one thing I would add to the list of spares is chain lube, unless you have a belt-driven machine. Even MacGyver can’t improvise himself out of that one!

Don’t even bother looking at other guidebooks! Better yet, go on a trip with Klancher/Freeman!

The Adventurous Motorcyclist’s Guide to Alaska

by Lee Klancher with Paul Freeman