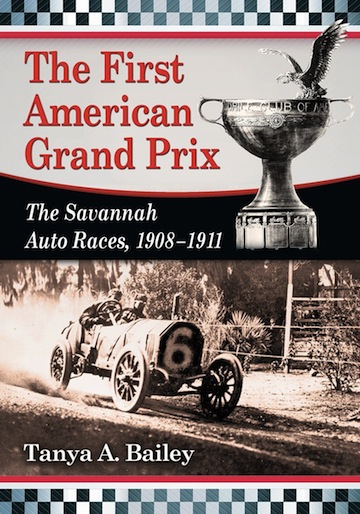 In 1908, 1910, and 1911, Savannah, Georgia, served as the host city for the running of the first three races for the Grand Prize for the Gold Cup of the Automobile Club of America (A.C.A.). In 1911, the city was also the host for the William K. Vanderbilt, Jr. Cup race, the first time that the two events were held together and the inaugural running of the Cup outside Long Island, New York, where it had been held since 1904. In this book, Tanya Bailey, who is the owner and curator of the Great Savannah Races Museum, provides a detailed look at these four events along with their support races.

For each of these events, Bailey provides a detailed listing of the drivers participating in any of the events being held during the race meeting. These brief biographies are full of the sort of detail that comes from considerable research, and this sort of digging and dogged determination is reflected throughout the book. The effort put forth on the part of the city of Savannah for the 1908 and subsequent race meetings is well researched and adds much to our knowledge of this too often overlooked aspect of automobile racing during this era.

The book is profusely illustrated with over a hundred photos, almost all well produced and, more importantly, well placed in the text. This wealth of images makes the relative scarcity of maps (only 4) all the more puzzling. That there are so few maps of the courses used for the Grand Prize races—only that for the 1908 event is provided (p. 126)—is odd given that the course used for the 1913 and 1914 motorcycle races is shown (p. 202), along with maps for earlier horseracing and bicycle racing tracks (pp. 8/9). Having maps of the March 1908 course and that used during 1910 and 1911 would have been useful to many readers.

Although Bailey provides an excellent narrative of what Savannah did to prepare for the A.C.A. Grand Prize races, her discussion regarding the larger issue of the problems between the Automobile Club of America and the American Automobile Association leaves something to be desired, unfortunately. However, she is hardly alone in this. It is important to realize that the A.C.A. was not only one of the original member clubs of the A.A.A. when it was formed in Chicago in 1902—the club providing many of the leaders and committee members of the A.A.A. in the following years—but also that the A.C.A. played an important role in the creation of the A.A.A. in the months leading to its formation in March 1902. It is incorrect to say that the A.C.A. was formed in 1899 “to act as the official representative of the United States at international racing events” because that came about only much later. That Bailey so badly misconstrues much of the controversy between the A.C.A. and the A.A.A. in 1908 is surprising and unfortunate, given the obvious depth of her research in other matters. It mars an otherwise excellent book.

Along with the earlier work of the late Dr. Julian K. Quattlebaum, M.D., The Great Savannah Races of 1908–1910–1911 (first published in 1957 by the R.L. Bryan Company of Columbia, South Carolina, and then reissued in 1983 and 2011 with a new introduction as The Great Savannah Races by Brown Thrasher Press, an imprint of the University of Georgia Press), Bailey’s book belongs on the bookshelf of anyone interested in automobile racing in the early years of the Twentieth Century.

Appendix, notes, bibliography, index. Won an award for Excellence in Public History from the Coastal Museum Association and a Local History Advocacy Award from the Georgia Archives.