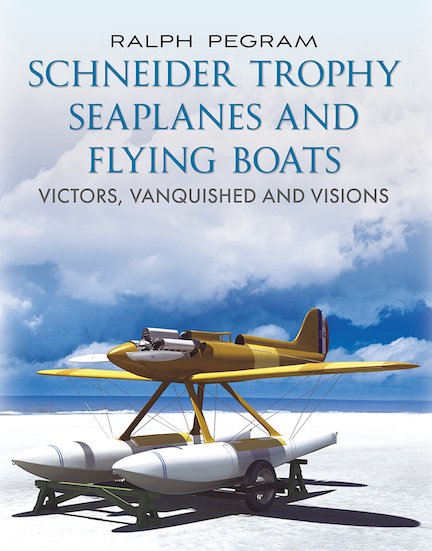 “The contest for the Coupe d’Aviation Maritime Jacques Schneider started out as just one of a number of broadly similar events for early sporting aviators but came to outlive them all, partly by luck, partly by the curious way in which events unfolded over the years. It was intended as just a simple race for marine aircraft, nothing special and not likely, or intended, to be the arena for an international struggle with strong political overtones, but this it was destined to become.”

Nowadays there is really no shortage of books about the Schneider Trophy so you’ll want to be sure you know what to expect when you choose one over another. The main claim to fame here is the inclusion of 3-views and scale maps.

British books, as this one is, tend to come out on the big anniversary of Britain winning in 1931 the trophy for the third time in a row, therefore owning it outright and in perpetuity, which happened to coincide with other events that effectively ended seaplane racing on the scale where governments were involved and considered participation a national goal. This book also came out on a big anniversary, but, ever so enlightened, it commemorated the start of the Schneider Trophy, in 1912. The first edition came out in 2012 and a reprint, always a good sign, in 2017. 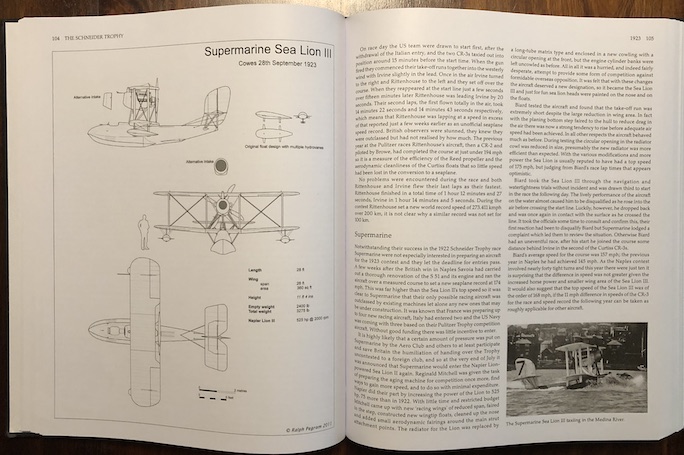 Aside from the expected childhood stirrings (Airfix kits, trading cards etc.) that plant the seed that one day blossoms to turn a “gentle hobby” into a whole new career, this book has a more unusual origin story: the aforementioned 3-views, or, rather, the lack of any good/reliable ones, are the primary reason Ralph Pegram set out to make a better book. He was looking for 3-views in order to build better aircraft models, couldn’t find much, what he did find was unsatisfactory—i.e. imprecise if not outright wrong—and, thanks to the emergence of the Almighty Interweb discovered not only online archives but also a community of likeminded enthusiasts with whom to collaborate on devising a flight simulator to “replay” the 1929 contest. As anyone who researches anything on the web finds out sooner or later, just because it’s out there doesn’t make it accurate. Pegram concluded that the whole Schneider history could stand some shaking out, and thus was born this quite thorough book. 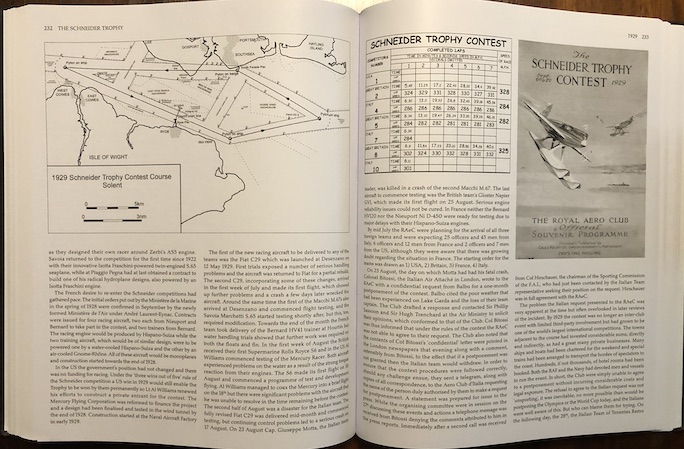 Pegram, retired from the oil exploration business, had originally intended to study aeronautical engineering before his academic disposition led him into a different field. His aviation leanings certainly lend depth in the areas of flight behavior and technical specs.

The introductory quote above already hints at the complexities of the event, and it also gives a good account of Pegram having a solid grasp of the many factors in play. While at first blush it is the scale modelers who will seek out this book for the 3-views, it is really a fine overall history, very readable, suitably augmented with period photos and, as is the case rather often with books by this publisher, priced so low as to handicap other books. 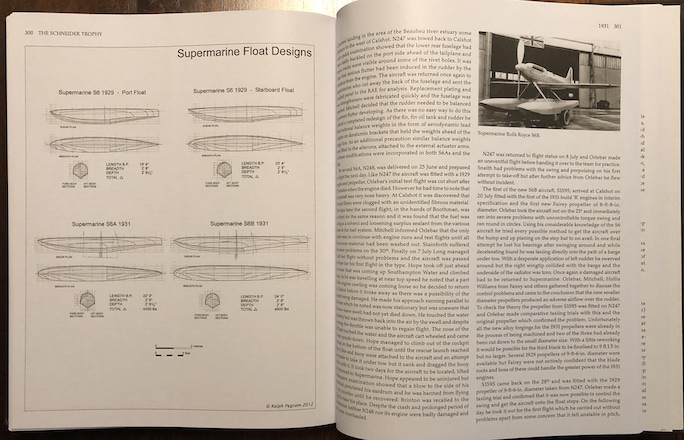 There are occasional oddities, such as—a plus—reprinting the actual Schneider Trophy regulations but—a minus—only in French! Or, there is a perfectly nice Index, including all the 100+ aircraft, but the ones that have 3-views are not so identified (which could have been as simple as setting their page numbers in italics).

The book progresses in chronological order, with one race year per chapter: 1912–14, 1919–31 and then, just to be thorough, 1932–35 even though the Schneider Trophy was by then effectively over and the several private efforts at mounting/sponsoring a race came to nothing. As to the latter point, especially in regard to the zealous commitment to the cause of someone like Lady Lucy Houston, it is left to the reader of those end-of-book pages to recall a comment Pegram made way back at the beginning: that the man “behind” the trophy, Jacques Schneider, had absolutely no sustained interest in it or in flying!

Closing remarks ask the inevitable question: were the races worth the cost, in money and lives and geopolitical tension? Pegram has circled the Schneider Trophy subject in several books, not least in the splendid Haynes Manuals series: Supermarine Rolls-Royce S6B Owners’ Workshop Manual: 1931 (S1595 and S1596). 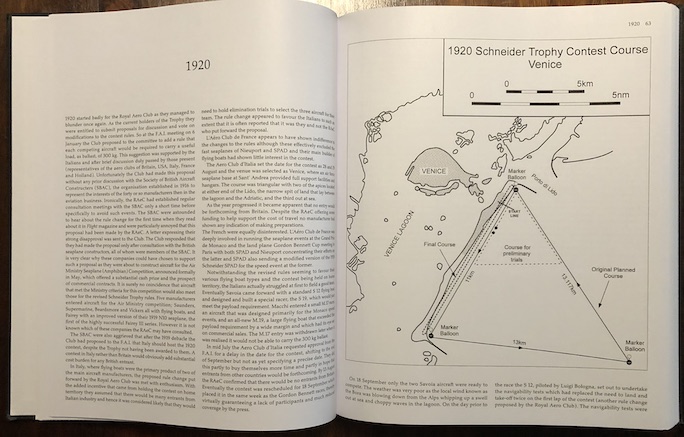 The 3-views are in 1:72 scale and show the aircraft in the specific configuration they had on race day; the legend lists aircraft name/model, pilot, race number, location, and date; basic dimensions (in meters and feet) and/or specs (motor, output etc.) are given, and sometimes the outline of a human figure is rendered just to give a quick impression of spatial relationships. All the photos are captioned but it wasn’t always possibly to place them near the corresponding body copy because the 3-views, which obviously have a prescribed size in order to remain to scale, and also course maps, which have to remain large enough to be legible, “interrupt” the flow of the text and rightly take precedence. Tables for each race show pilot and start and elapsed times plus notes. Appended are a very useful and insightful Summary; a very good commentary on original blueprints accompanied by a table you won’t find anywhere else listing, for each year and each aircraft, the archives (or other sources) that hold construction drawings along with notes on their quality; and a thorough Bibliography.

North Eastern Motorsport: A Century of Memories »
« Zenith Trans-Oceanic, The Royalty of Radios