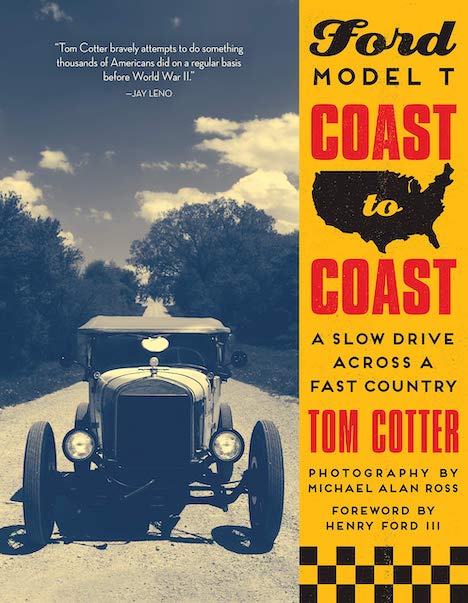 If you read and enjoyed John Steinbeck’s Travels with Charley or William Least Heat Moon’s Blue Highways or River Horse, you will thoroughly enjoy Tom Cotter’s Ford Model T Coast to Coast although I would submit a more fitting subtitle than A Slow Drive Across a Fast Country might have been “A Slow Drive Eating Our Way Across the Country”!

The book’s title lets you know you are about to be taken along on an adventure from sea to shining sea, Atlantic to Pacific. Your ride is a 92-year- old car, a 1926 Model T Speedster named Something Special. Your route is the Lincoln Highway with a few side trips. And the entire saga is a wonderful, enjoyable, and very much worthwhile read illustrated with equally fine images shot along the way by photographer Michael Alan Ross. 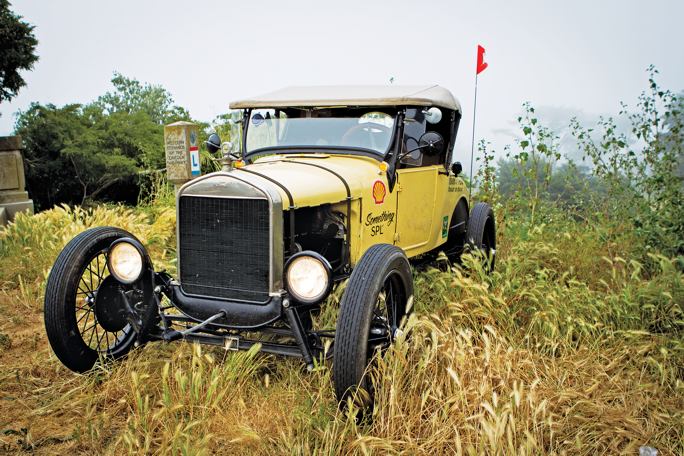 Something Special posed for Michael Alan Ross to snap her portrait next to a Lincoln Highway marker.

If you’re familiar with the Lincoln Highway you know much of it is still two lanes thus Something Special’s passengers were able to avoid the chain cookie-cutter accommodations and eateries found along the interstate. They purposely sought and found more interesting places to sleep and eat. And as you are shown and told about both in detail, reading the book on an empty stomach is at your own peril or you’re apt to soon be raiding the refrigerator. 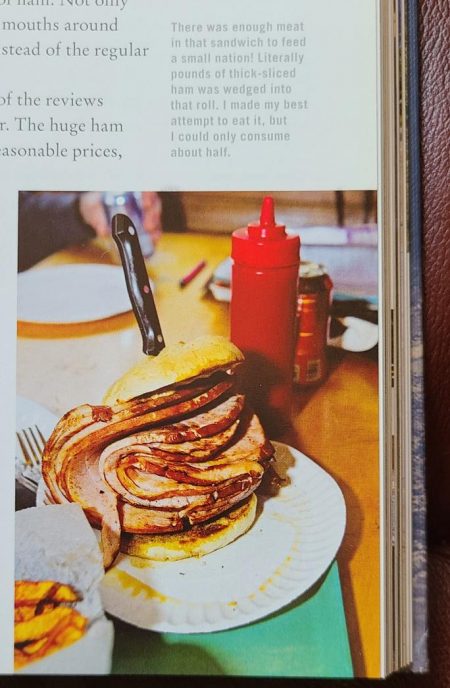 An example of the wonderful repasts they enjoyed along the way. This is a ”normal” ham sandwich—normal at least at Walat’s in Boswell, Pennsylvania.

Think about it: in 1914 Henry Ford’s company produced more cars than the combined production of all other manufacturers at the time. By 1918 half of all the cars on the road in the US were Model Ts. In total something in the neighborhood of 16 million were made and sold and it would take decades before Volkswagen’s Beetle achieved similar popularity and sales.

Choosing such an “ancient” car for the trip wasn’t such a risk for, as you’ll read, Something Special had not merely been meticulously maintained but “tweaked” by Cotter’s co-driver and ace Model T mechanic/modifier Dave Coleman so she made double a stock T’s horsepower. And Dave tended her daily with great care along the way. Still it’s notable that thirteen states and nearly 4,000 miles were traversed with Something Special never missing a beat. 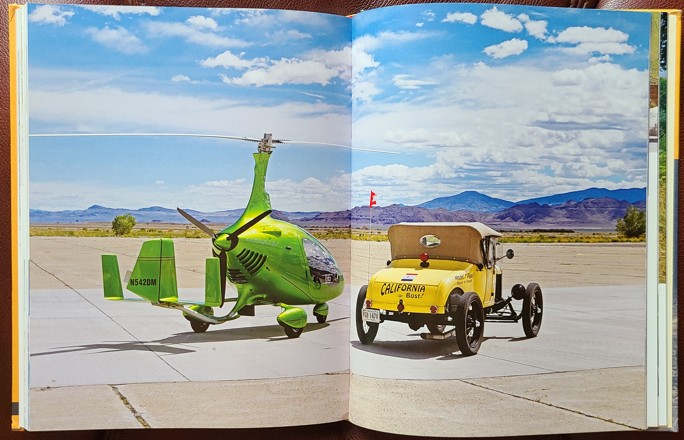 This photo’s caption observes: “Talk about a contrast in transportation.” The location is the historic Wendover (Utah) Field that originally was a top secret location as it is where the Enola Gay bomber took off on her mission to Hiroshima, Japan. Now it’s a general aviation airfield. On the day Something Special was there, this AutoGyro was visiting too having been flown there by its pilot/builder Dieter Moening. Quite the comparison: both the T and AutoGyro have four-cylinder power and both burn gasoline. But the AutoGyro’s Rotax engine is turbocharged, giving it around 115 hp as compared to the around 40 hp of the souped-up T’s engine.

Cotter’s words engage as he doesn’t just tell of the people they met, the places they saw, or ate and slept at. He also reminisces and assesses how the country has changed over Something Special’s span of years—and his—and what the future may be like. Ross’ photos are “just right” too. He even has his own chapter titled “Photographer’s Notes” in which he explains how he captured the “on the road” images while driving the chase vehicle/camera car adding “don’t try this yourself.” 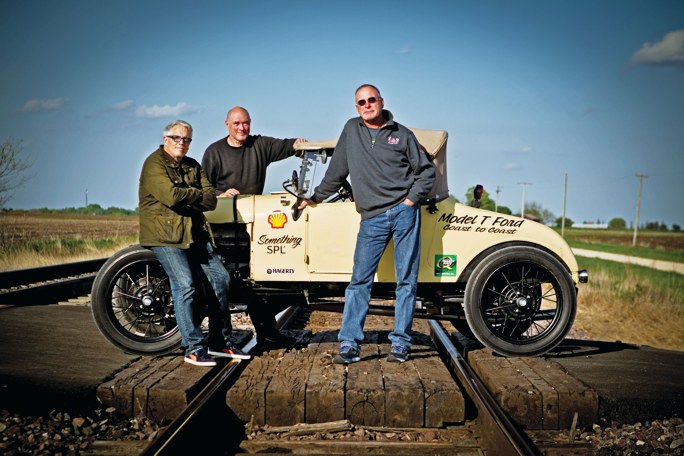 Do not deny yourself this wonderful read that ranges from history to great places to eat and sleep, and interesting things to see and do from coast to coast along the Lincoln Highway. And then, why not make your own trip? It doesn’t need to be in a Ford Model T to have a great time!

A Slow Drive Across a Fast Country

Posted Under: Automobiles, Travel, US | Author: Helen Hutchings | No comments yet