A Clearing in the Distance: Frederick Law Olmsted and America in the Nineteenth Century 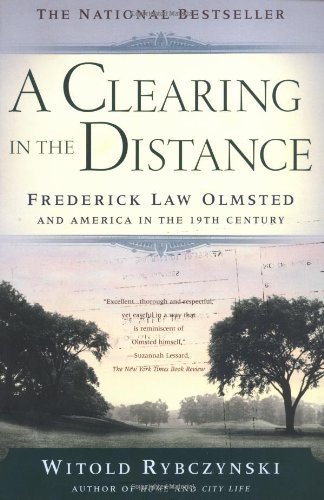 Whether or not you recognize the name Frederick Law Olmstead in the subtitle of A Clearing in the Distance, you absolutely are familiar with many of the locations this man designed for he is, inarguably, not only the first but the greatest American landscape architect ever. The body of his work, as well as that of the firm he established and that survived him, is nothing short of huge—numbering some 5,500 in all, with the majority of them in his lifetime.

The image that the publisher chose to use on the book’s cover was sourced from the National Park Service whose photographer had taken it somewhere on the grounds of the Frederick Law Olmsted National Historic Site in Brookline, Massachusetts. That is but one of the properties he designed in Boston alone (he created each element of the string of Boston parks referred to as the Emerald Necklace) and is also where the house he and his wife Mary named Fairsted (sources differ regarding its spelling, Fairstead or Fairsted) is located. They lived there for a time and also established it as the offices of the world’s first full-scale professional landscape architecture practice. Today it is a National Historic Site operated by the National Park Service where, in season, visitors can tour the home and grounds.

Ah, but it is the back cover image that is truly wonderful, as well it should be, for it was created in 1895 by John Singer Sargent, painted in his very recognizable Realism style. His portrait of 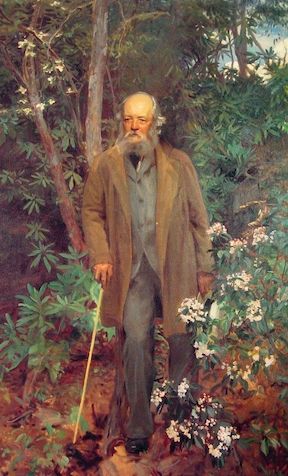 Olmsted was commissioned by Olmsted’s client George W. Vanderbilt for whom Frederick Law (and subsequently his firm after his passing in 1903) had worked from 1891 to 1909 landscaping Vanderbilt’s Biltmore estate in Asheville, North Carolina. Thus, for his portrait of Olmsted, Sargent situated him on the front terrace of the estate’s house.

Your commentator is fortunate to know a couple who has lived for nearly a quarter of a century in one of the Olmsted-planned communities. Where they reside had been designated in 1970 a National Historic Landmark. They mentioned that “we have our share of residents who try to extrapolate what Olmsted would do if he were alive today, which lends an aura of hazy fantasy to our local politics,” and then added that “it is a great community to drive a prewar car around in!” Olmsted was known for his far-sighted planning, but it boggles the mind to think that even he might have imaged what life was going to be like in these millennial years.

This biography is well and engagingly written by a man with a distinctive name, Witold Rybczynski. He is the University of Pennsylvania’s emeritus professor of architecture as well as author of numerous other books published by this same publisher; Scribner, an imprint licensed by Simon & Schuster.

Interestingly, Rybczynski had complimentary words about another writer who had earlier published several works focusing on specific facets of Olmsted’s life and accomplishments. But David Schuyler didn’t display the same graciousness for, in the review of this book, he took a highly critical stance saying in his conclusion that “Rybczynski was content to summarize existing knowledge.”

Be that as it may, for this reader A Clearing in the Distance, which was my first detailed introduction to the life and accomplishments of the man Frederick Law Olmsted, by deftly placing him not merely in his times, America in the Nineteenth Century (he lived 1822 to 1903), and telling of his personal and family life as well as his professional, relating some of his philosophies and experiences along with describing his lasting gifts to mankind with the creation of places like New York’s Central Park, Detroit’s Belle Isle, Montreal’s Mount Royal, and the grounds of the US Capitol in DC, university campuses such as Yale, Stanford and Cornell, and several planned communities, to cite just a few, was a genuine reading as well as edifying pleasure.

Olmsted was equally able and accomplished in areas unrelated to landscape architecture. He was co-founder and a writer for The Nation magazine and, as an early anti-slavery advocate, during the Civil War he had served as executive secretary to the US Sanitary Commission which was the forerunner of the American Red Cross.

The final segment of the book is titled “Olmsted’s Distant Effects”. It contains a chapter of the same name which presents what is essentially the bibliography. Rather than an alphabetically ordered list, it is a narrative organized chronologically that describes and discusses each source or previously published work. And, it is here that Rybczynski describes Schuyler’s works on Olmsted as a “monumental series, intelligently annotated and exhaustively researched.” That is followed by “A Selected List of Olmsted Projects”. Then, in more traditional form, come chapter end notes and a comprehensive index.

A Clearing in the Distance is, in the experience of this reader, a much enjoyed book about a genuinely remarkable man, Frederick Law Olmsted and America in the Nineteenth Century.

A Clearing in the Distance

Frederick Law Olmsted and America in the Nineteenth Century