Bugatti Queen: In Search of a French Racing Legend 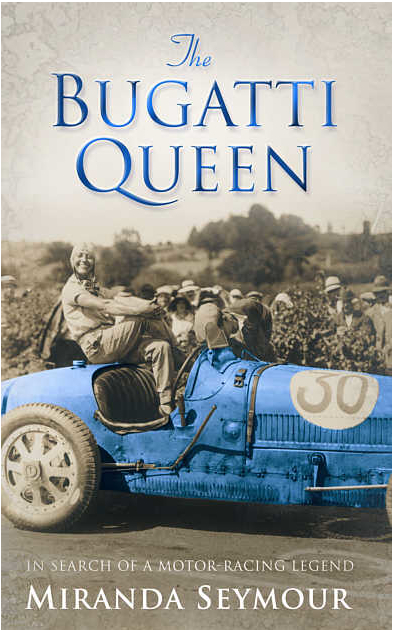 Those of us populating the automotive realm have long recognized that “things” automotive have relevancy beyond the auto. Thus it is gratifying to find more and more “mainstream” publishers making a similar “discovery.” Case in point: Bugatti Queen, In search of a French Racing Legend comes from about as large a “mainstream” publisher as one can ask for—Random House. It is the result of some brilliant and coincidentally lucky research by author Miranda Seymour as she sought to discover the woman wheeling those cars, mostly Bugattis, to victory against all comers, male and female, from 1928-1939, using the name Hellé Nice. And the story she uncovered, of the woman whose birth name was Hèléne Delangle, is even more amazing for racing was a second career embarked upon when she was nearly 30, motivated by a fall that injured her knees so this innovative and creative dancer could no longer perform on stage! Muscled and strong in a day when women were more cosseted, she was every inch a woman and a femme fatale.

Although Hellé spent most of her eighty-plus years in Europe, though there were a few months, in the late 1930s, when she took America “by storm.” In Hollywood she was tested for screen roles and hobnobbed with the rich and famous. On American race tracks, her main drive was Ralph de Palma’s Miller. If de Palma was in town and wanted to be restored to his own seat, Hellé resigned herself to lesser-by-not-much (!) cars such as the Duesenberg belonging to Larry Beal or Hermann Schurch’s Hoosier Pete. Often she drove bare-headed. She was the draw, as ads-of-the-era show. And she knew how to give the crowds the show they wanted. For her appearance at the Woodbridge, New Jersey track she was, “pleasingly star like in her white costume and with her Harlow-blond hair.”
The author, Miranda Seymour, demonstrates her writing skill throughout even putting the reader in the cockpit as Hellé drives “a small, pale blue car with a tail like an engorged dagger” around Montlhéry at 122 mph. “The rev counter showed 5500: good. Keep it steady. Her ankle throbbed as she clamped the rubber sole of her shoe to the throttle, gluing it down; the tires swiveled on loose grit, bringing a shriek of rubber into the roar of the wind. Her small gloved hands held the steering wheel tight and high… You’re part of the machine. Feel everything it tells you. Listen to it, and when you reach the limit, keep pushing… The heat of the wheel was scorching through her gloves… Her eyes smarted in the dry vacuum behind the goggles… A bar, heavy as iron, was bending her shoulder blades forward as she struggled to hold the wheel at exactly the right angle to keep the car below the barrier line.”

Find it, read it — you will not be bored or disappointed.

Phil Hill: Yankee Champion, First American to Win the Driving Championship of the World »
« Paul Frère, My Life Full of Cars: Behind the Wheel with the World’s Top Motoring Journalist