And now for something completely different. . . . We’ll review an actual exhibit (runs May 17–September 7, 2015) and not the book about it because the physical exhibit space is, in the case of this show and this artist, very much part of the experience the artist intends for the viewer. 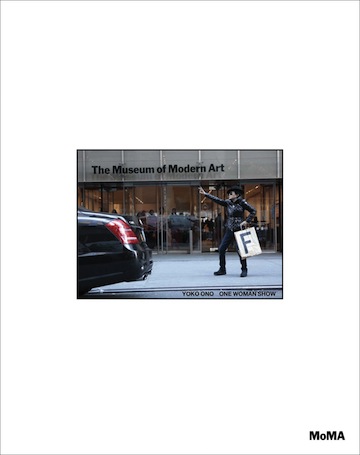 “Yoko Ono: One Woman Show, 1960–1971 surveys the decisive decade that led up to Ono’s unauthorized exhibition at MoMA*, bringing together approximately 125 of her early objects, works on paper, installations, performances, audio recordings, and films, alongside rarely seen archival materials. A number of works invite interaction, including Painting to Be Stepped On (1960/1961) and Ono’s groundbreaking performance, Bag Piece (1964). The exhibition draws upon the 2008 acquisition of the Gilbert and Lila Silverman Fluxus Collection Gift, which added approximately 100 of Ono’s artworks and related ephemera to the Museum’s holdings.”

Climb a metal corkscrew staircase—only one patron allowed at a time. Look at the sky. It works: the sky is waiting up there just for you, just as Yoko Ono had planned it. Ever read her book Grapefruit? An art book. A book of instructions: “Take a tape of the sound of the snow falling.” “Walk all over the city with an empty baby carriage.” “Imagine letting a goldfish swim across the sky.” Cut everyday objects in half—a cup, an electric heater, a table, a chair—and paint them white. Place a fresh green apple on a museum-quality Plexiglas pedestal, label it Apple; change as needed. How about a game of chess to be played with all-white pieces on an all-white board? Care to take some time for an art film? Try Film No. Four—a sequence of naked, undulating backsides. 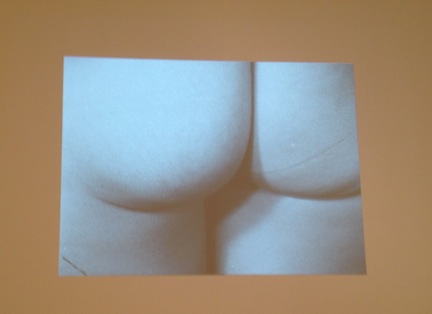 Or Fly: A common housefly explores a woman’s body, from head to toe and all in-between. Or watch as a young Ono sits on stage unmoving, stoically, as volunteers from the audience, one at a time, snip off pieces of her clothing—Cut Piece.

WAR IS OVER! IF YOU WANT IT. Happy Christmas from John and Yoko. In 1969 posters and billboards with this message, a message of hope and naïveté, altruism and commercialism, were scattered all over the world, the campaign engineered by Ono and her third husband John Lennon. Ono is complicated, one hopes sincere. An example of this poster is on display. 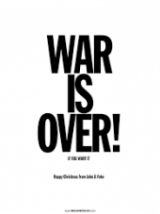 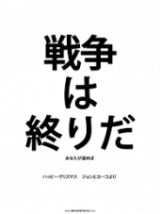 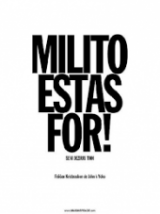 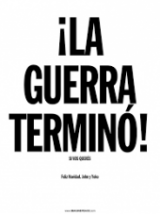 Need a music break? Go into the Plastic Ono Band room. Black walls and ceiling, with one small window in the door. In the center, on a low, glass-topped, black table is found a vinyl collector’s fantasy: Original LPs, 45s and picture sleeves—all in mint condition and some of them rare. Notice the variations on the Apple Records logo. Bench seats line two walls. At intervals, earphones are available to listen to a selection of Ono’s music: Walking on Thin Ice, Open Your Box, AOS—as Why plays throughout the room: played loud, but not too loud. 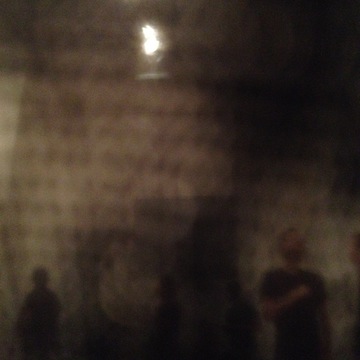 Recall Ono and Lennon’s Bagism? Can we be sure that is Yoko and John inside the bags on stage? Being under wraps weirdly affects their celebrity status. When one is completely covered, one cannot be judged on the basis of race, gender, attire and/or age. Give it a go? On a low white dais, any patron—you!—can become part of the exhibit. The bag is actually a black mesh sheet. After covering yourself completely, you can sit still or move about. A pleasant surprise is that although your audience cannot see you, you can see them, albeit hazily and obliquely. I tried it. I liked it.

Art has an odd duality. We tend to think of an individual work as something amazingly and uniquely precious, something rare, something created by someone of uncommon prescience and exceptional sensitivity. We value the concept of one-of-a-kind. On the other hand, there is just so damned much of it. How does uniqueness, individuality, distinctiveness jive with a world jam-packed with the stuff? So then, because of the sheer star power of John Lennon, is it possible to answer the following: Would Ono have achieved her lofty level of fame on her own merits? Would she be in MoMA if she had never married a Beatle? Remember, she had already a considerable reputation in the avant garde well before The Beatles appeared on her radar. Fame, fortune and fate are fickle, but letting her artwork speak for itself tends to answer these queries affirmatively: The work is tough, fun, deep, clever, complex, abstruse, groovy, friendly, user-friendly, playful, physical, metaphysical, provocative, ambiguous, ambitious, indirect, intelligent, political, feminist, humanist and worthwhile. She has her detractors, but this often has more to do with The Beatles thing than the quality of her art. There are many artists represented in major museums across the world whose work is far inferior to Ono’s. Carl Andre’s Equivalent, a stack of yellow bricks on the gallery floor, and Barnett Newman’s The Wild, a red stripe on a white background, both at MoMA, come to mind. Here’s to her: Ono more than deserves her one-woman show. It’s about time—and space. 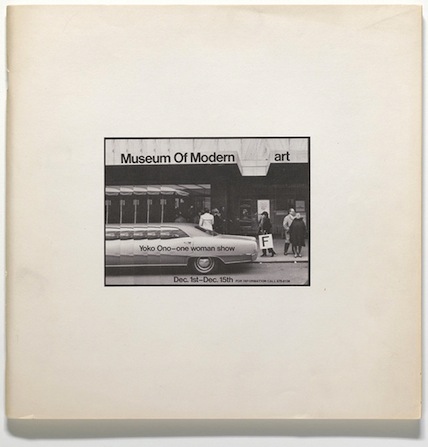