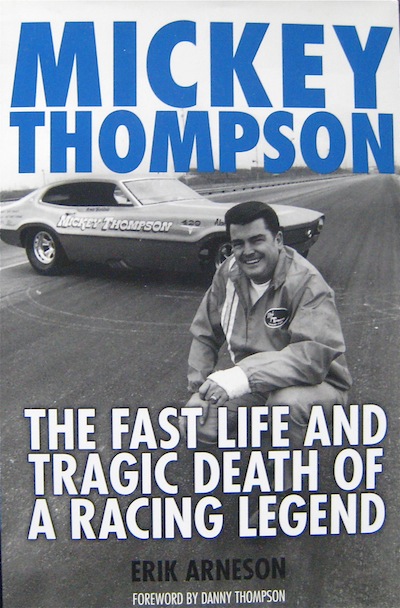 Any Calvin and Hobbes fans out there? One classic Sunday full-color spread begins with Calvin piloting a jet fighter plane, an F-4 Phantom, only to find the canopy glass smeared, the throttle snapping off in his hands, the landing gear inoperable and the cockpit fused together, disallowing the intrepid warrior to eject. The last panel shows the youngster engaged in finishing a scale model, a hopeless mess, and his complaint is pure Calvin: “Stupid model.” When not much older than Calvin, I attempted to reproduce in scale Mickey Thompson’s Challenger; a four-engined streamlined beauty, the first wheel-driven car to—along with its designer, builder and driver Thompson—break the 400 mph barrier. If I had given my version a run at the Bonneville Salt Flats, I am sure the results, like Calvin’s flight, would end in disaster; I was obviously better at daydreaming than at modeling. Thompson was larger than life, a hero to many, and certainly an instigator of daydreams for young car aficionados like myself. Over the years I pursued other interests, both in and out of the automotive milieu, but Thompson’s presence never really disappeared from my attention. His various accomplishments, along with some failures, kept cropping up in the automotive press, and the contemporary advertisements for his speed equipment, wheels and tires, decades after his assassination, prove that his name and reputation still are viable. 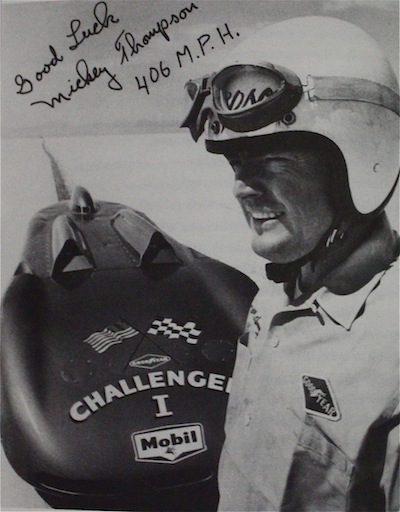 Assassination? In 1988, Thompson and his wife Trudy were gunned down at their home by two bicycle-riding killers; it wasn’t until 1994 that the case was reopened; and it wasn’t until 2007 that one Mike Goodwin, Thompson’s bitter business rival, who for years engaged the racer in a multitude of lawsuits and also harassed and threatened Thompson and his family, was tried, convicted and imprisoned for his central role in the murders. Arneson devotes the last two of the book’s eleven chapters to the murders, investigations and the trial, and this material is in turns shocking, heartbreaking, fascinating and, finally, redemptive. But Arneson’s aim is neither to dwell on this aspect of the story nor to overstate it. He writes: “I wanted this book to give readers an idea of how important Mickey was to the racing world rather than simply focus on the sensationalized murder.” Arneson succeeds in this. 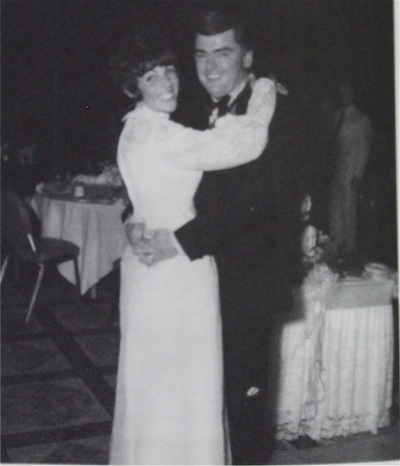 He also succeeds in breathing life into the story of a man, one with little formal education, who, with his incredible determination, imagination, technical abilities and just plain hard work, became not only a respected automotive innovator and perennial record-breaker, but also an astute and successful businessman. After an introductory chapter, Arneson begins his tale in 1944, with a brash young hot-rodder, who, initially challenging her to a street race, meets, woos and eventually marries Judy Creach, Thompson’s first wife. From there we get a quick look at Thompson’s childhood as a policeman’s son growing up in California, then a review of Thompson’s involvement in the infancy of organized drag racing and, of course, the description and history of the many cars that solidified Thompson’s reputation.

Chapters devoted to his stints at drag strips, the Bonneville Speedway, the Indianapolis Motor Speedway, Baja, and the various venues for stadium off-road racing, a sport that he nearly single-handedly created, are well-researched, informative and fast-paced. Thompson’s likeable personality shines through, as do his warm relationships with family, friends, business associates and fellow race drivers, although the downside of those being involved with a workaholic is not ignored. Along with the stories of racing, descriptions of the cars, the successes and failures of Thompson’s various business enterprises, we get a full and in-depth portrait of the man himself. Other figures in the book, Thompson’s wives and children, for example, are also well drawn and of interest.

Arneson had been a design editor and motorsports reporter for USA Today and authored books on drag racing, one on John Force, one on Darrell Gwynn. His style is lively yet professional, smooth and unobtrusive; I finished the book in two sittings. The book has a foreword by Thompson’s son Danny; it is indexed and generously illustrated with black-and-white photos. Many of these are of the cars, but pictures from family albums are also included. Because it is as much a story of a man of substance as it is a story of a speed racer, I would go as far as to recommend this book even to those not particularly interested in the world of automotive sports. For those who do have an interest in racing, I would suggest not passing it by.

Motorcars of the Classic Era »
« By the Bomb’s Early Light