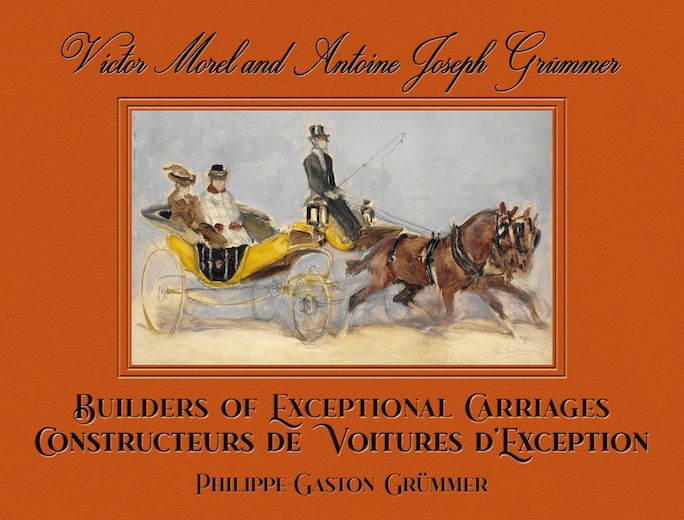 . . . Completely committed to perfection, they [Maison Morel] sought quality and distinction and their motto was ‘HIGH. EVER HIGHER.’”

(English and French, on opposite pages) When this author’s previous book hinted at further Grümmer material being on his mind, who would have thought it would be all about—carriages and harness-makers! That means that this time he’s writing about his grandfather’s generation, in round numbers a cool 170 years ago. Even without his family connection to coachbuilding the author had private, strong interests in equestrian activities so researching this book must have been particularly rewarding. Sadly, Philippe Grümmer (b. 1942) didn’t see it finished but died as it went to press. Noticing in the Acknowledgments how many † symbols there are has a further sobering effect.

From ultra-sporty (Mors torpedo) to ultra-luxurious (Mercedes travel limousine) Grümmer did it all. Philippe Gaston Grümmer had been wanting to research a book about grand-père’s early cars too but unless someone else steps up, that won’t happen now.

If the scarcity of surviving archival materials made the car book hard to write, this carriage book must have been harder still because so little was recorded in period and what little has survived is too disjointed to yield a full picture. Consult even the most elaborate coachbuilding reference books and you’ll find at most a few sentences about Grümmer and even less about Morel. Maison Morel was ranked at the 1878 Universal Exhibition in Paris as “among the most prominent coachbuilders in the capital” (and thereby of a country that utterly dominated this industry), had a significantly large output, clients in the top-most reaches of society, and were innovators (cf. Grümmer was the first to use electric lighting [1890] and rubberized tires).

Aficionados of automotive bodywork have, of necessity, an awareness of its antecedents in the carriage trade. One can only hope that the car-centric crowd doesn’t merely think of the “coach” in coachbuilding as an abstraction but can see the skill and technology (such as it is) transfer of one to the other. This is the book to take “awareness” to the higher plane of really detailed knowledge about the skills and materials, the business model, societal forces/stratification, and ancillary trades (leather, bronze, lanterns, fabrics, heraldic painters etc.).

Very nice: this is a super rare, complete, intact very early brochure. It has no date printed on it. Not so nice: why doesn’t the photo caption mention one? More to the point, why isn’t there a photo caption at all?? And why is it that this brochure has been placed 80 pages ahead of the book’s car coverage—which then makes no reference to it?

To wit, the author threads the needle by beginning with “High Society and the Art of Living in Paris at the End of the Nineteenth Century”—an era of linen maids and 3rd footmen—and how horse and carriage advanced mobility only to become redundant when the motorcar established itself as the better mousetrap. Grümmer (b. 1834), who was younger than Morel (b. 1814), was there for all of it.

There is, it must be said, a certain brevity when it comes to nitty-gritty: while horses and their attending infrastructure (stables, feed, staff) are discussed nothing is said about the insurmountable problem of waste (a 1,000-pound horse = ca. 51 pounds of feces/day!) or “running” costs. Even carriage prices are not discussed much. The latter is also true of car prices, with the exception of a 1907/08 brochure that is reproduced here (above). And speaking of prices, what reader would not pause at reading that Grümmer, at the age of 47 and of entirely unremarkable financial background, was able to come up with a staggering 5 MILLION Euros in today’s money when he acquired Morel’s firm in 1881 from his widow and son-in-law? The book doesn’t say, nor does it really explain what quality Morel, who had no son, saw in Grümmer when he “picked one of his employees to involve in his business and as possible successor.”

It is impossible to know if the author just did not have the information or if the manuscript was not fully finalized at the time of his death. But even his coauthors, who each provided separate chapters, do not appear to have thought of everything. This may explain the occasional bump. An example: a photo caption says “An article dated 1880 by Victor Morel regarding patent law.” Would you not take away from this sentence that Morel also wrote it in 1880? 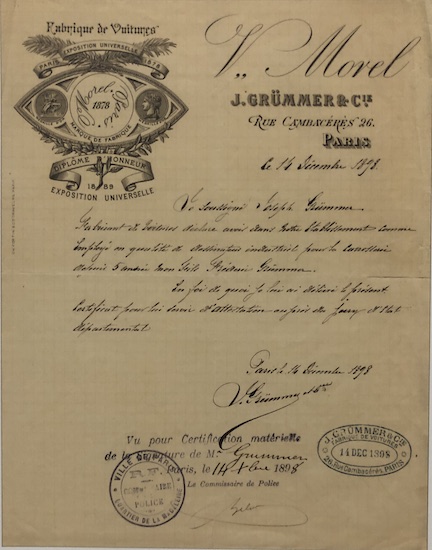 Take in the script with its flourishes. Take a look at the type on the book’s cover (also used throughout). Similarities? Would it surprise you to learn that the book’s designer had this font custom-made, based on archival period correspondence? That’s the Dalton Watson way, people.

Well, dead men don’t write and he was most certainly dead then—but you won’t read about that for another 12 pages. Moreover, the English sentence fails to capture a detail in the French original: the “article” is not under Morel’s byline but rather a petition to which he was one of six signatories, so the presence of his name even posthumously does not necessarily conflict with the date of publication in a trade journal. But leaving such details to the reader to notice on their own is risky.

If neither carriages nor automobiles move you, know that this landscape-format book contains a good number of period fine art showing horses and people in their element. Also, if luxury goods by, to name just two, Hermès or Vuitton have a place in your life you will find in this book how these houses started and what built their now iconic reputations.

And, if nothing else, you can practice your French here.

Posted Under: Automobiles, Multilingual / Not English | Author: Sabu Advani | No comments yet