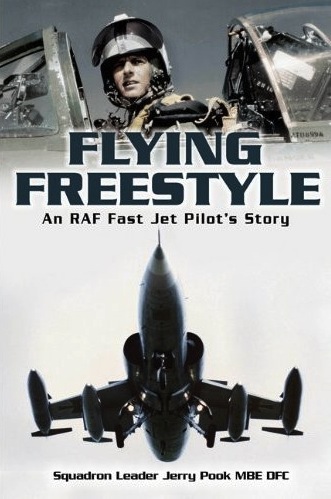 This is a book for real flying enthusiasts. Jerry Pook has that ability as a writer to describe his remarkable flying experiences in a dramatic way that puts you in the cockpit with him during his many varied missions. Air Vice-Marshall Ron Elder calls Pook in his Foreword “one of life’s natural rebels.” Clearly a natural and very able pilot, he had made it quite clear that, although a Royal Air Force College graduate with a real chance of reaching the senior ranks, his only desire was to fly. As a result he was able to fly continuously for more than a quarter of a century with no interruption of a ground tour, an extraordinary achievement, particularly for a Cranwell graduate who was expected to fly his share of desks.

But his excellent flying ability was his undoing, being selected for instructor training upon completion of his training instead of getting to strap on one of his dream aeroplanes, the Hunter.

It meant spending a further two years in Flying Training Command teaching his pupils to fly the Jet Provost. Eventually he achieved his ambition and converted onto the Hunter at Chivenor in North Devon. From there Pook was posted to 208 Squadron, based at the RAF station on the island of Muharraq in the Persian Gulf, next door to Bahrain.

The RAF has a long tradition of flying and policing in the Middle East, going back to the 1920s. The heat, with temperatures of 40º C is a constant problem in the summer months, and the Hunter’s enclosed cockpit created so much heat that very fast taxiing was required to get to the runway and airborne as soon as possible so that the air conditioning would kick in. Even in the 1960s, local maps were not very accurate and so navigation was a continuously demanding problem in a desert environment as Saudi Arabia and Iranian airspace were strictly off limits and there were limited electronic navigation aids.

Pook’s personality fitted well into the informal way the RAF operated in the Gulf, and he soon acclimatized to the heat and humidity. The basic responsibility of 208 squadron was to defend Kuwait against Iraqi aggression. Kuwait was 320 miles north of Muharraq, a long way to transit. After flying 450 hours in the Hunter, Pook was posted back to the UK to convert onto the Harrier at Wittering. He describes the conversion course quite dramatically, “I have never before or since felt so stretched by a new aircraft type . . . the constant impression was that you were just barely in control of the jet.” He describes the Harrier course in fascinating detail, giving a very good idea of how demanding the aircraft was to fly well. He was posted to RAF Wildenrath in (West) Germany where the Harrier, with its vertical/short take off and landing capability was deployed to unprepared sites in the event of a confrontation with the Warsaw Pact countries. A substantial section of the book is devoted to a description of these exciting practice deployments in forested areas around West Germany.

In between his flying tours on the Harrier, Pook accepted an offer to be an exchange pilot with the Royal Netherlands Air Force flying the Lockheed F 104 Starfighter. An indication of his determination to succeed was his success in learning to speak Dutch; he eventually became so proficient that he passed the British civil service interpreter’s first class exam!

In 1981 Pook joined the Tri-National Tornado Training Establishment at Cottesmore to train crews on the new swing wing Tornado. Ten years later he developed heart problems and was sadly grounded by the RAF at the age of 47, having flown 5500 hours during his career and achieved the rank of Squadron Leader, including Harrier combat in the 1982 Falklands war (about which he wrote a separate book), operating from the Royal Navy carrier, HMS Hermes. The grounding was a terrible disappointment but in Pook’s forthright way he recuperated and found pleasure in sailing and gliding.

There are two 8-page sections of excellently captioned b/w photos of the aeroplanes flown by Pook and locations he served in. Well written and technically very interesting, I cannot recommend this book too highly! Detailed Index.

The Horten Brothers and Their All-Wing Aircraft »
« Yesterday We Were in America: Alcock and Brown, First to Fly the Atlantic Non-stop