The Life and Death of an Aviation Pioneer 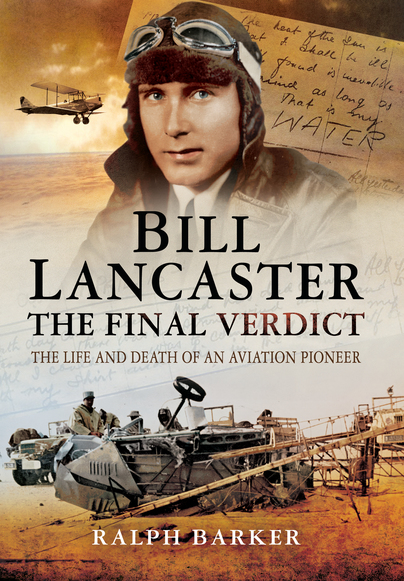 “After the crash, while he waited at first for rescue, then death, the pilot had kept a diary, using the empty pages of his logbook. It told a great deal about the man, about the flight on which he had crashed. But above all it told of his love for a woman.”

When Bill Lancaster set out on an attempt to break the UK–Cape Town flight record in April 1933 he was arguably a broken man. He had returned to the UK from the United States after a series of events that had made him just as, if not more famous than his flying. Now back in the UK he had been unable to get a job and was betting all (and his father’s savings) on a last record attempt. Before the events in the US had turned his life upside down, Lancaster had already set the record for the first flight to carry a female passenger from the UK to Australia. Now he was desperate to remake his name. Sadly, behind schedule and flying with inadequate cockpit lighting, he flew into the depths of the Central Sahara against the advice of the French Colonial forces and was brought down. It was not until February 1962—29 years later—that an Army patrol was to come across the wreckage of Lancaster’s plane and his mummified body beside it. On his body was a diary showing that Captain Lancaster had lain by his plane for 8 days before expiring of thirst. The diary is full of references for his love—not love for his wife, the mother of his two young girls but for an Australian woman called Jessie “Chubbie” Miller. It was Lancaster’s infatuation with Chubbie that set in motion the events that turned his fame into notoriety.

This book recounts those events in a manner and style that is almost that of a novel. Certainly the story it tells would be a plot any writer would be happy to have come up with. The story centers around Lancaster’s life with Miller. He had met her at a party in 1927 and they immediately became friendly; it was Miller who persuaded Lancaster to make her his business partner and take her with him on a record attempt, taking a light plane from the UK to Australia the following year. It was on this long trip that the two became intimate and cemented their personal and professional partnership. Though they were pipped to the post by Australian aviation pioneer Bert Hinkler they managed to take the record as both the first to take a passenger and first to take a woman on such a long flight.

After detailing this impressive journey in considerable detail the book charts the couple’s move to the United States, with Lancaster abandoning his wife and two young daughters though they remained on friendly terms. The record attempt had given Lancaster a lot of publicity, and lured by business offers, the couple moved there later that year on the promise of a job making an aviation film which ultimately did not happen. The book tells of how the move to the US did not work out as Lancaster had hoped and that, while Miller learned to fly and became a minor celebrity, the work began to dry up for Lancaster and he was forced to take on minor flying jobs, some of a very dubious nature. It was Chubbie falling in love of with a young writer that Lancaster had hired to write her autobiography that marks the turning point. Lancaster was devastated and confronted the couple, staying overnight in the house. Chubbie’s new beau ended up dead with a bullet in his head. Bill Lancaster shoot him or did Haden Clarke commit suicide? These are questions that still are not clear. The book goes through the subsequent trial in minute detail and, although Lancaster was ultimately acquitted, many questions remain unanswerable. The question of the murder, the evidence against Lancaster, and the defense are all presented dispassionately and it is up to the reader to make their own minds.

The final flight is covered and one is left in no doubt as to Lancaster’s state of mind during its undertaking, nor is one surprised at the disaster that ultimately befell him. It is the final diary entries, though, published here for the first time, that make for fascinating reading. They are not only very moving and deeply sad but they give a sense of the grit of the man even in the most desperate circumstances.

The book is thus a fascinating read for all who are interested in both aviation history and true crime. It is written in finely crafted prose and the author is meticulous in giving a neutral and unbiased assessment of the man. Written with the cooperation of Chubbie Miller (d. 1972; it was she who had been given custody of the diary but it has been missing since the 1980s) and the Lancaster family and first published in 1969 as Verdict on a Lost Flyer, this updated reprint offers a new generation an opportunity to consider this complicated and unresolved story, not so much to render a verdict but to be reminded that things can get away from you!

A car connection: participants in the 1974 World Cup Rally learned of the Lancaster story and that his plane had remained in the desert. They returned the following year to mount an expedition to recover it; a resulting documentary film, Journey to a Legend, directed by John Stainton, was released in Australia and won several awards. That the story continues to exert a pull on the imagination is evident not least in the fact that a Lancaster descendant made a 2014 documentary film, The Lost Aviator and that a number of fictional versions exist in print, on film, and even the stage.

The Life and Death of an Aviation Pioneer