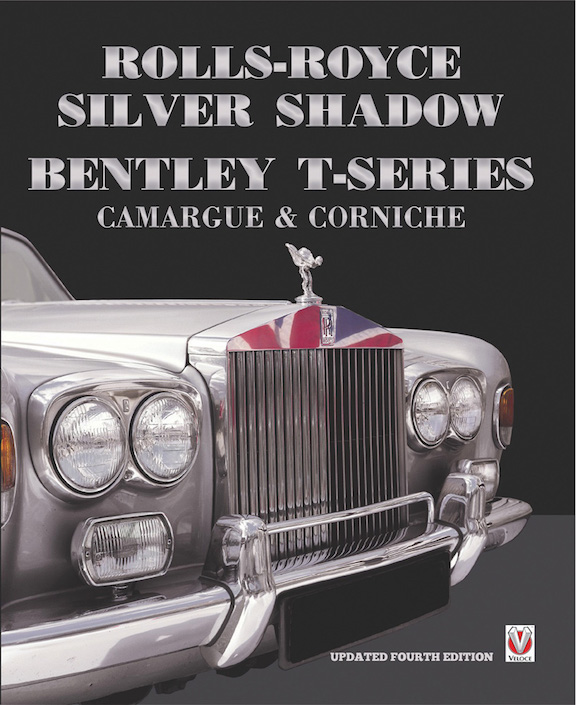 This fourth edition not only coincides with the Silver Shadow’s 60th anniversary but takes full advantage of the possibilities a revision offers: pretty much every page has been touched, there is a new intro and a number of new illustrations, the page range has grown from 160 to 216, and the color illustrations are now interspersed with the text rather than banished to a center section. That the price has gone up since the last edition 16 years ago is perfectly reasonable (although the book is now only a softcover). If you have any of the three earlier editions, it’s time to upgrade.

The Silver Shadow and its Bentley version as well as the derivatives they spawned were the firm’s best-selling cars in period but the first model not to retain any meaningful resale value—partly because so many had been built and partly because they were no longer bespoke, coachbuilt except for a tiny percentage. At any rate, the design has aged well, is instantly recognized, and design professionals have always recognized how much this model was the right answer to the right question—an aspect that is too often overshadowed by its radical “otherness” compared to the previous line-up. Bobbitt describes well the enormous forethought, long-range planning, and development of new technologies that enabled Rolls-Royce to pull off an unprecedented engineering tour de force—he does this so well that anyone fortunate enough to own one (a good one, that is; problem cars are ruinous) will fall in love with their car all over again upon reading this book.

Readers new to the model should internalize something even old hands in the Rolls-Royce world too often miss: the Shadow’s counterpart on the Bentley side, the Bentley T, is the much rarer model, at a 1:6 ratio and despite an artificial price lowering by a mere 1%—for which there are very specific psycho-demographic reasons. This book does not fully exhaust that fascinating subject, nor does any other so you’ll have to make friends with someone in the RR/B world to get that story.

Do note that Bobbitt, a prolific author, brought out a similarly titled book in 2008, Rolls-Royce Silver Shadow and Bentley T-Series (ISBN 978 1 84584 149 1) in this publisher’s “The Essential Buyer’s Guide” series. But at only 64 pages, it merely scratches the surface.

As a Bentley owner himself, Bobbitt brings enthusiasm and knowledge to the task, covers the subject comprehensively, and creates a thorough context for the model and its derivatives. Shadow/T-specific monographs are relatively sparse and this book clearly fills a void.

Commendably, the book not only covers all the pertinent points in regard to model history (design, mechanicals, prototypes, construction, performance etc.) but includes a very realistic assessment of ownership issues and a buyer’s checklist as well as driving impressions.

Appendices of production figures, specs, sources for spares (UK and US, ditto for marque clubs), and a Bibliography are complemented by a good Index. Importantly, this latest edition deals with the key change in the company, the two marques going their separate ways after 2003 and specifically the disposition of the factory spare parts scheme in which a now Bentley-owned entity—Crewe Genuine Parts—provides original parts also for Rolls-Royces (up to a certain year).

This book has always been useful in all its iterations and this 4th edition deserves particular praise for being so much more than just a thinly disguised way of cashing in on the model’s anniversary.

Once In a Great City, A Detroit Story »
« Price Guide For The Beatles American Records