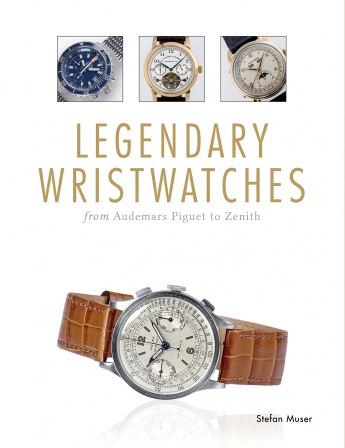 “Every decade of the 20th century had its own unique trends. Before the First World War there was still no prevailing consensus about owning a watch that was carried on the wrist rather than in the pocket.”

How can anyone offer this much book for so little money? Conspiracy theorists who suspect it’s subsidized by the watchmakers showcased here would be wrong although there’s a different, but peripheral “commercial” dimension: all the watches here were sold at auction, and the author runs the auction house.

This book is a primarily a visual guide to wristwatch styles throughout the decades. First published in German in 2010 this introduction to watch collecting presents particularly important or representative examples to offer the new collector some reference points.

If there’s anything that’s changed in the five years between the German and the English edition it is that prices have moved up—and not always in predictable ways. Rolex stainless steel versions, for instance, have appreciated significantly more than Rolex gold watches. This sort of thing, however, is beyond the level of detail covered in this book although the author has written a number of pricing guides and other watch books. 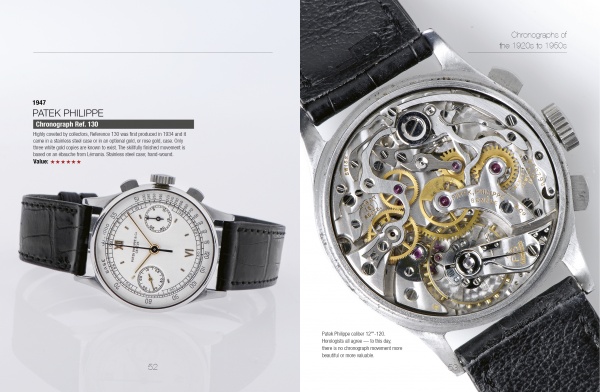 Muser doesn’t just track prices, his work as the proprietor of the renowned German auction house Auktionen Dr. Crott shapes the market. His 2004 auction of a rare Patek Philippe steel chronograph achieved a record for a wristwatch sold in Germany that still stands, nearly 1.3 million euros. He’s also been around watches most of his life, buying his first at the age of a eight at a fleamarket, tearing it apart—and discovering he’d been had.

This book is somewhat akin to an auction catalog but contains much less detail. No individual prices are given, only ranges (from around $1000) which are coupled to collectabilty ratings, the highest of which is 5 stars for “exceptionally rare delicacy for ambitious collectors”). There are no specs in regards to sizes (vintage watches are positively diminutive compared to today’s honkers) or any great details about movements, complications, or construction as all this is really not what the book is about. 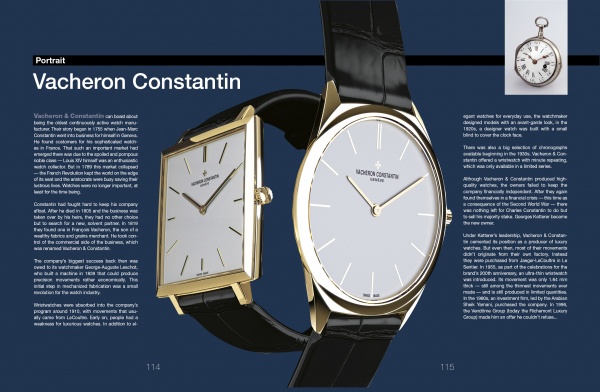 The idea here is to show in broad strokes how changes in societal trends were accompanied by changes in, for instance, wristwatches. That stopwatches, chronographs, or multi-function watches emerged at a specific time is not by accident: sport diving didn’t exist at the dawn of time, ergo neither did dive watches. Military folk need watches that do specific things, racing timers need others. Doctors need a pulsometer, storm chasers a telemeter. There is enough here to start the reader who has never considered such matters to connect a few new dots and develop an appreciation for the technical finesse to squeeze all this functionality into such a small container—that can, to coin a phrase, take a licking and keep on ticking. 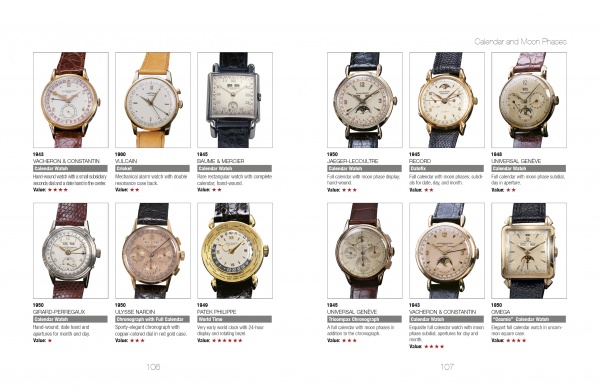 The book is divided by type of watch, which happens to make it roughly chronological. Each section is introduced by a few remarks and each watch is given a basic description. The level of detail seems somewhat arbitrary. Example: anyone with Star Wars interests would be tickled to see a 1970 Omega Seamaster nicknamed the “Anakin Skywalker” but nothing is said about its (usually more expensive) “Darth Vader” sibling.

There is a basic Glossary at the back. Bookended by a 1879 Girard-Peregaux and a 2006 Ulysse Nardin there are many well- and lesser-known brands and also quartz watches. Most of the brands are Swiss and German, and most of the watches are men’s models. Several high-profile makers are spotlighted in stand-alone sections throughout the book. Photography and reproduction as well as paper and printing are top-notch; as we said at the beginning, a lot of book for the money.

If watch collecting is in your future, or if you already are a collector who is looking to branch out, this is a very nice book for fanning the flame.