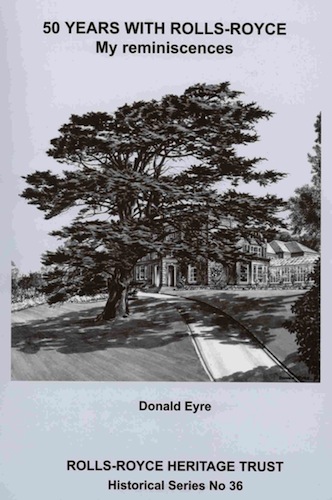 Although these memoirs were written in 1969 there was then no immediate avenue for publication. Only after the establishment of the Rolls-Royce Heritage Trust (which seeks to preserve the industrial history of Rolls-Royce plc and its ancestral anncillary companies) in 1981 more momentum was gained and at long last we can now read about some of the giants at Rolls-Royce first-hand: Eyre (whose name, in customary Rolls-Royce manner is abbreviated in internal communications to DE) worked with most of them. He was born on Feb. 27, 1905 and joined Rolls-Royce in February 1920 as a draughtsman. His artistic skills became legendary and enabled him to see “around” a design and to illustrate the internals in a way that benefited the actual designer.

In 1928 he joined the design team at Sir Henry Royce’s private home in West Wittering (where R maintained a design office an small staff so as to better preserve his failing health and avoid having to go to the works) and saw close up how Royce’s mind worked. His description of these days is delightful.

In November 1932 he returned to Derby and eventually moved into aero engine design and the beginnings of the jet engine. It was his good fortune to have worked in his early years for Royce and for another genius, Dr. A.A. Griffith, in his later years at Rolls-Royce. Griffith’s job was to look into the future so that Rolls-Royce would have the materials technology, the engine designs, and the interface with future aeroplanes to ensure the company’s success.

Eyre translated Griffith’s concepts and sketches into final designs, working in the rarefied atmosphere of Rolls-Royce’s guest house (Duffield Bank House, where many, many decades later the BMW team would set up shop to brainstorm the new car they would be building after taking the marque over from VW in 2001) and the Old Hall at Littleover. Their work is still seminal today. Eyre and Griffith went on to design the famous Flying Bedstead in 1953 which gave Rolls-Royce the vertical take-off and lift breakthrough it needed.

Eyre was given the honor of designing the memorial window (whose symbology is described in an Appendix) to Sir Henry Royce at Westminster Abbey in London. He retired in February 1970, at which time he was the only member of Royce’s personal design staff to be still employed by Rolls-Royce, and died in September 1978.

Eyre’s sketches of scenes whilst working for Royce in England and in France, and the anecdotes he recalled, make this a delightful memoir. This is volume 36 in the Trust’s Historical Series which also publishes a Technical Series and the occasional monograph. All these books are superb and show how [a] how important the preservation of industrial history is and [b] what depth and quality are achievable with the right corporate vision and leadership.

Autowork »
« The Automobile: A Century of Progress