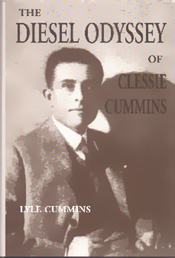 Clessie Cummins (d. 1968) is not only the name behind the ubiquitous Cummins Diesel truck engine but also a world speed and endurance record holder.

Readers with historical awareness will recognize in the publisher’s name a clever homage to Sadi Carnot (1796–1832), the brilliant young French scientist who is considered the father of thermodynamics. Carnot proposed a theoretical “perfect” engine cycle against which the efficiency of all our “imperfect” external (steam) and internal combustion engines are compared. While Carnot proved it impossible to convert into work all of the energy held in a fuel, engineers continue striving to extend the efficiency threshold. Rudolf Diesel, for instance, made giant advances in that effort. And thus, we are right in the thick of the things this book is about.

Clessie’s son Lyle is a mechanical engineer and himself the holder of five fuel injection-related patents (another aspect inseparable from diesel technology) as well as a historian. He worked with his dad on his boats and foreign cars and later, 1955–1963, as a design and development engineer in Clessie’s engineering company. Of his three books this one is the most approachable, being more biographical than technical.

Although, a qualifier here: there is no way to separate the man from his work and so there are a good number of technical drawings and requisite explanations, mainly in relation to patent applications. But the focus is and remains on Clessie’s life, his values and his entrepreneurship. The book is a testament to the art of problem solving, to persistence, and—never to be underestimated—to being in the right place at the right time.

Lyle draws on his own memories, the recollections of friends and family, and company records. With such impeccable sources at his disposal and his historian’s eye for the larger context there can be little doubt that this is a balanced account. The chapters are extensively backed up by annotations and source notes. The index, so often the weak link in otherwise useful books, is exemplary in scope and organization! Very, very well done.

Aside from Clessie Cummins’ impact on the field of engine development, and, by extension, of his indirect impact on a trucking industry that came to be reshaped by his product, there is much of interest found here about cars in general. Especially the Indy and Daytona racing efforts and Clessie’s personal cars. His interest in “innovative automobiles” led in 1946 to Rolls-Royce and Bentley ownership, quite a stretch from his work interests! Ever the engineer, he engaged in correspondence with Rolls-Royce regarding unsatisfactory heating system controls and once remarked “how great it would be if British craftsmanship could be combined with German engineering!”

Posted Under: Automobiles, Biography/ Autobiography, History, Out of Print, Technology | Author: Sabu Advani | No comments yet