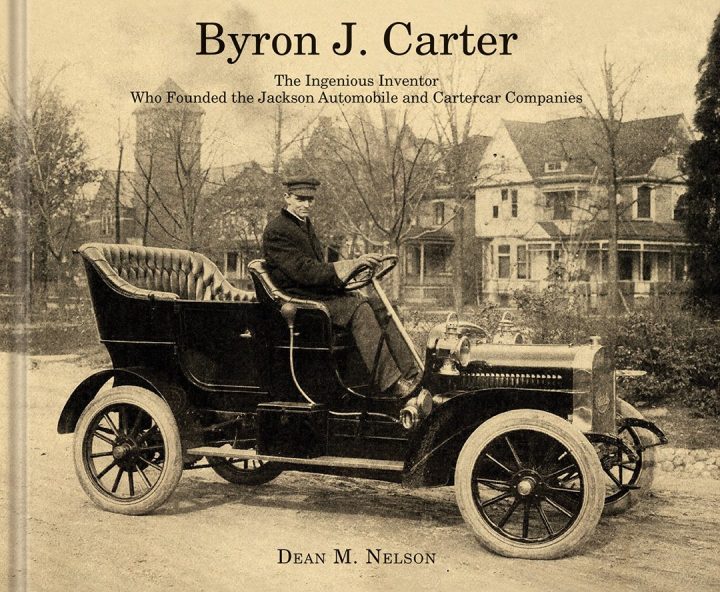 The genesis of this book began when a 15-year-old boy pestered his father to buy him a 1900 Jackson automobile. It was quickly established that the car was actually a 1909 model built by Jackson, although not branded as such, but a young Dean Nelson had begun his quest to research as much as he could about its creation.

21-year-old Byron Carter of Jackson, Michigan, developed an affinity for steam engines, which powered his printing and rubber stamp business starting in 1884. He was also an early bicycle racer, which he turned into a business in late 1893 partnering with his father. Bicycle assembly and repair furthered Byron’s mechanical skills. The first fifth of the book profiles the above endeavours before venturing into automotive fields.

After the frustrations of trying to assemble a gasoline car designed by Charles Brady King and Oliver Bartel, Carter returned to steam for his first prototype built in 1900. Over the next two years he started building steam cars on a very small scale. He also perfected a three-cylinder steam engine but needed capital to realize its potential. In mid-1902 this capital came from George Matthews and Charles Lewis with the creation of the Jackson Automobile Company initially using the brand name Jaxon. In 1903 Jackson also introduced a gasoline auto with a single cylinder engine designed by Carter but in May 1904, he left the company.

Since 1903 Carter had been perfecting his friction-drive transmission which eventually resulted in the formation of the Motorcar Company, first located in Jackson and then moved to Detroit in September 1905 for the manufacture of the Cartercar, which began the next year. A pneumonia attack ended Byron Carter’s promising career on April 6, 1908. The author was not able to substantiate any link in the speculation that Carter received injuries from cranking a car, which led to his fatal pneumonia and prompted Henry Leland of Cadillac to introduce the electric self-starter. General Motors bought what had become the Cartercar Company on October 26, 1909 with Durant keen to gain title to the friction-drive transmission patents.

The research that has gone into this book is simply staggering. Besides corporate correspondence and early automotive magazines the author has scoured local newspapers and government records such as financial reports and census and regulatory filings in an effort to explore every facet of Byron Carter’s life. The level of research is indicated by 833 citations spanning 24 pages of notes. The author shares his reasoning for any of his assumptions in a manner that reflects his legal training, which led to his becoming an attorney.

Another delight of this book is the remarkable period photography that frequently occupies a full page, taking advantage of the landscape layout of the book. These photos are in their original unretouched form so as not to lose any detail. This author believes in authenticity. Nelson has gained access to several photographic collections, including those preserved by Carter’s descendants, and explored each image in detail.

Detailed photo captions frequently duplicate the text but in the case of some patent drawings there is no explanation of their operation and purpose. There are no chapter numbers, likely because some headings are not supported with enough text to fill a page. This does result in some layouts that have a fair amount of white space. But, in all other respects this book is bound to a high standard with thick paper.

The lasting impressions of this book are the incredible research undertaken and the period photographs that complement a very detailed story of Byron Carter’s achievements before his untimely death at only 44.

This book is highly recommended for a reader who appreciates a thorough examination of an early creative automotive pioneer.