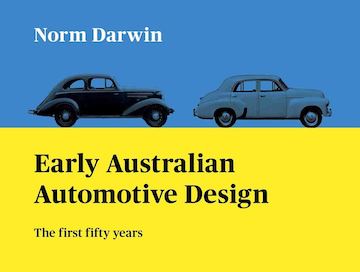 Generally, I must admit that I find that books and articles on automotive design tend to fall outside my usual range of reading interests. Do I have an interest in automotive design? Well, yes, of course! Few automotive historians would ever admit to not having such an interest. However, there are only so many interests that one can devote attention to within the time available. Plus, there is only so much space on the bookshelf and one’s allowance only goes so far . . .

Thanks to attending the 3rd annual conference of the Automotive Historians of Australia, I had the opportunity to finally visit Melbourne, a city that I had somehow managed to miss in my previous visits to Australia. One of the presentations was by Norm Darwin, whose topic was that of this book, his book, Early Australian Automotive Design. I think it is safe to say that I literally sat up straight in my chair and then leaned forward during the entirety of Norm’s talk. This was, to be honest, great stuff to me, all wondrously presented. It was one of those topics in which my lack of knowledge was exceeded only by my ignorance of the subject.

Norm Darwin’s book, which is actually his doctoral thesis at the Royal Melbourne Institute of Technology (RMIT), fills what had long been a void in the automotive literature of the Australian motor industry. Surprisingly little has been written about the history of the motorcar in Australia and indigenous design. Darwin presents vehicles from the very beginning, the turn of the 20th century, to the early 1950s.

The book is not only filled with an abundance of illustrations (which are nicely integrated into the topic being discussed, demonstrating the careful thought given to the layout of the book), but it is also what I call a Good Read. As the author of nine books on the Australian motor scene (including histories of both Holden and Ford in Australia), Darwin manages to combine his narrative skills as a journalist and automotive writer with those of the academic scholar to produce a very readable—and, yes, enjoyable!—academic treatise that could have just as easily been dry and, ahem, mind numbing. As someone who has read far more theses and dissertations than I ever imagined possible, this is easily one among the few that rolls along, page after page.

Not being the most mechanical or engineering-oriented of automotive historians, I will admit that I expected Darwin would occasionally lose me when he discusses the technical side of the design world. However, this was not the case. He handled it all quite well and I did not sit there puzzled and confused, something I often tend to do when such things are discussed in similar books.

Oh, I should add that with this being a scholarly effort, there are Endnotes for each chapter. In addition, there is a selected Bibliography and a comprehensive Index. There is, alas, a certain irony that Darwin’s book appears just as the Australian motor industry came to an end. This, I suggest, makes his book all the more important and a significant addition to not only the literature of the Australian motor industry, but that of international automotive design.

Posted Under: Art, Artists and Design, Automobiles | Author: Donald Capps | No comments yet