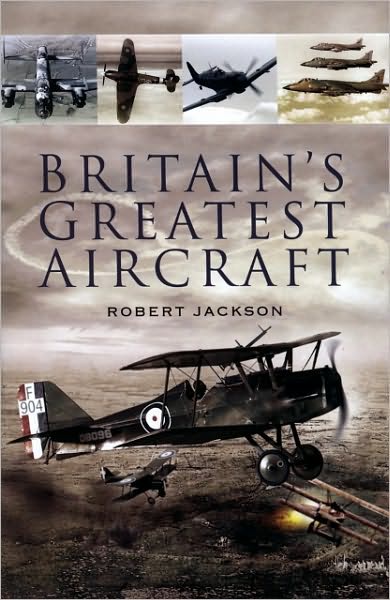 It was 105 years ago, in 1908, that the first sustained flight took place in the UK, five years after the Wright Brothers’ achievement. Ironically the pilot, Sam Cody, was an American. It took WWI to accelerate the development of competitive fighter aircraft for Britain’s Royal Flying Corps to the extent that they could compete satisfactorily with German interceptors.

This book examines 22 British civil and military aircraft that author Jackson considers “great.” He has over 90 books to his name, many of them aviation titles. He was also an RAF pilot and instructor so it doesn’t require too much effort to simply accept his choices here as valid even if the criteria are not explained. There is no Introduction or the like that lays out his methodology for selecting them or even how he goes about describing them. The early chapters, for instance, use mainly action reports rather than aircraft features to establish each machine’s merits. This approach is entirely different in later chapters.

While I accept his choices, mine would have been different and, for instance, included the Vickers Vimy bomber, made famous by being the first aircraft to cross the Atlantic in 1919. And what makes the Valiant V bomber in Jackson’s estimation more important than the Vulcan? Or why does he refer throughout to the BAC TSR2 as “English Electric” (the firm did play a pivotal role in the project) instead of “British Aircraft Corporation”?

Absent any overarching narrative by the author it is left to the reader to deduce from the fact that four of Jackson’s chosen aircraft (Sopwith Camel, SE 5A, FE2B Bristol fighter, DH 4) were designed, built, tested and put into service within only 12 months that technology must have evolved rapidly. There is no table or timeline that shows this sort of thing; all the data is buried in the text and needs to be painstakingly exhumed by the reader. Presumably a book like this is intended for the general-interest reader (a specialist would have no real use for it) and that is the very reader who would benefit most from being given a leg up.

As Jackson relates the immediate postwar years, the inevitable reduction of defense spending nearly saw the demise of the very young Royal Air Force at the hands of a jealous Army and Royal Navy. Moreover, much of the RAF’s equipment was “hand me down” aircraft from WWI and it wasn’t until the late 1920s that the Bristol Bulldog fighter (still a bi-plane) went into service, reflecting the serious lack of aerospace research and development funding at this time.

In the middle 1930s, the British government’s recognition of a serious war threat from Hitler’s Germany saw the UK aircraft industry respond with some badly needed bomber and fighter designs like the Vickers Wellington, Hawker Hurricane, and Supermarine Spitfire. However, huge strides made by the Douglas DC 3 and Boeing 247 in the United States resulted in popular, highly efficient, and fast airliners that left contemporary UK designs far behind. One area is a happier story, flying boats. Short Brothers developed the successful C Class boats for Imperial Airways, which evolved into the Sunderland, one of the RAF’s longest-serving aircraft.

One of the most successful aircraft of WWII, the de Havilland Mosquito bomber, is a natural Jackson choice. It was the result of brilliant lateral design thinking, using a revolutionary, efficient, and easily obtainable plywood structure. With its high speed of 360 mph, powered by two Rolls-Royce Merlin engines, no defensive armament was needed and with a crew of two it could carry the same bomb load as the mighty, and aptly named, B-17 Flying Fortress!

Pioneering work by Sir Frank Whittle resulted in his invention of the jet engine in the 1930s and the first UK-designed jet flew in May 1941. This resulted in the creation of the Gloster Meteor jet fighter that saw service in the closing days of WWII while the English Electric Canberra bomber provided the postwar RAF with the benefits of jet propulsion. For a decade after the war, Britain led the world in jet engine design, and commercial airliners like the turboprop Vickers Armstrong Viscount and jet-propelled de Havilland Comet (both included here) were years ahead of contemporary US airliners.

These 22 aircraft Jackson selected are certainly representative of Britain’s important and sometimes extraordinary contributions to the advancement of flight, which is evident not least in the fact that several of them saw widespread service in other countries. Jackson’s final aircraft choice, the Harrier series of highly successful vertical take-off strike aircraft and—in a global context—the only viable VTOL machine, illustrates just how well British designs stacked up.

Photographically, this excellent and readable book is pretty strong. All color photos are bundled into a 16-page center section where they are in basically sequential order but mostly undated. No Index.

Posted Under: Aviation | Author: Mike Jolley | No comments yet

Superman, The Ultimate Guide to The Man of Steel »
« Jewels in the Crown – How Tata of India Transformed Britain’s Jaguar and Land Rover