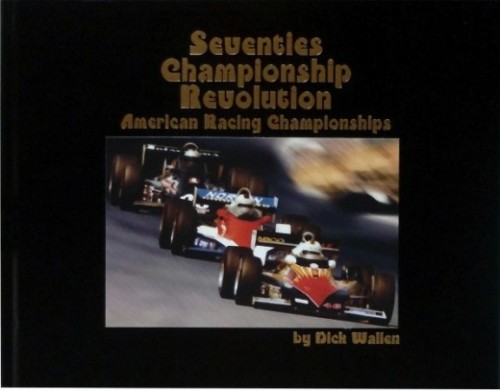 “As the 2003 racing season begins, there’s still a revolution in American speedway racing going on, as CART and the IRL fight to attract the continuing interest of drivers, sponsors, and engine manufacturers. It makes me wonder if there will be an American open-wheel championship then years from now.”

Well, now that it is ten years later, we know that open-wheel racing has not ceased to exist—but it has been a decade full of shenanigans that even Wallen couldn’t have foreseen.

The cover of this typically well-presented book from Dick Wallen Productions suggests that its title is Seventies Championship Revolution: American Racing Championships and that it is by Dick Wallen. Turning to the title page, however, the title is now given as Seventies Revolution, with the layout and design credited to Wallen while Michael Jordan is editor. Flipping to the contents page reveals yet another wrinkle: Wallen is listed as the author of the chapter on the 1970 season, “1970: The Sport of the Seventies,” with Phil Harms responsible for the appendix containing “Box Scores and Racing Statistics,” and the nine chapters covering the 1971–1979 seasons—the bulk of the book—being the work of Bob Schilling. In other words, welcome to another Dick Wallen production.

In his introduction, Wallen makes his feelings about the state of national championship racing during the 1970s known: “As a long-time fan of traditional American racing on dirt tracks, the separation of the dirt events from the national championship after 1970 was very disappointing for me.” Wallen notes that the 1970 season had events of “all kinds” held on a wide variety of venues, the eighteen championship events that season (the book has a typo giving the number as 149 . . .) being held on paved ovals of various lengths to include the superspeedways of Indianapolis and Ontario, road courses, and dirt tracks. The dirt tracks were eliminated beginning with the 1971 season, a separate championship being created for them; the road course events were also dropped in 1971, but unlike the dirt tracks events returned to the championship in 1977. He goes on to suggest that, “In the end, this split between speedways and dirt tracks has done the national driving championship no good at all.”

This is, to put it mildly, scarcely a ringing endorsement by Wallen for the subject covered here, the national championship during the Seventies. And, it shows. Whereas the volumes dealing with the 1950s and the 1960s each exceed 500 pages, this book barely exceeds 200. Interestingly, although the chapter listings on the contents page show the years of the seasons being covered, in the body of the work itself only the chapter headings are given, the years being omitted. Simply an oddity on the part of Wallen when laying out the book? Perhaps. But, it could also signal that Wallen’s heart just wasn’t in it. That said, however lacking Wallen’s personal enthusiasm and sense of commitment to the topic, it is still the only book on the shelf that is devoted to the topic of national championship racing during the 1970s.

Each of the 10 seasons covered here receives an individual chapter. Co-author [?] Bob Schilling, it should be noted, is a retired California high school history teacher and a contributor to the volumes on the 1950s and 1960s national championships, as well as the author of Pole Position: Rex Mays (South Pasadena: Race Data Press, 2011), which began as his master’s thesis in the 1980s.

Each chapter starts with a very brief overview of the season, generally noting only the highlights, with the individual events then being given a few paragraphs, again, often providing little more than highlights. However, this is offset to at least a small degree by each event being given at least one and often several photographs, usually in color. This is where the Wallen books excel, the heavy, slick paper allowing the quality of the photo reproduction to be generally excellent to superb in almost every case. This also allows for the details found in many of the photographs to be seen. The photos tend to focus on the cars but usually offer only a frontal view; a quibble, of course, but if you’re looking at 500+ photos it’s hard not to notice this.

Beginning with the 1971 season, the National Dirt Track Championship is also covered, something which, one suspects, might not have happened were it not for Wallen’s positive opinion regarding dirt track racing. The photos used in the coverage of these events tend to be superb, regardless of the angle from which they were taken. Something that one rarely encounters from a publisher is not only an acknowledgement that a caption and photo are not correct, but then placing a slightly postcard-sized insert in the book with the correct picture that fits the caption in the book (p. 89).

The appendix, compiled by the late Phil Harms, is devoted to the results of each national championship by year (in microscopically small type!). Needless to say, they are rather complete and generally mirror the race data that Harms placed on the Internet many years ago, with a few tweaks here and there. Interestingly, especially given Wallen’s proclamation of love for dirt track racing, the race data for the National Dirt Track Championship is sparse, with only the events for each season listed and the winner for each event given, along with the Top 10 in points. An odd thing to leave out, it would seem.

As noted, this book is probably the only one devoted to this topic—and it may well retain that distinction for many more years. That alone suggests that anyone with an interest in this era should have a copy on their bookshelf. While certainly not the most comprehensive book one would have wished for this interesting and fascinating decade of automobile racing, it is far better than the vast number of alternatives, which would include, of course, Wallen choosing to do nothing.