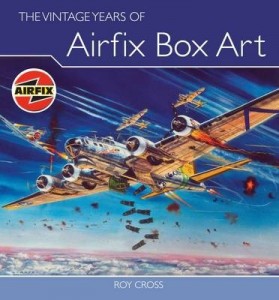 “Don’t judge a book by its cover!” But do judge an Airfix kit by its box top! Countless people did just that. Competing against half a dozen competitors, Airfix sold millions of its plastic kits on the strength of their dramatic, dynamic, and realistic box-top artwork. And for a decade, Roy Cross was their chief illustrator, creating over 200 finished pieces, many of which are still in use today even after the company itself went through several different owners.

Now part of the Hornby group (which also owns iconic British firms Corgi and Scalectrix) the company was originally founded in 1939 to produce inflatable rubber toys. By the end of World War Two it was one of the first British companies to have an injection-molding machine. Necessity, as so often, was the mother of invention when a promotional toy ordered by tractor manufacturer Harry Ferguson proved impossible to mold as one piece and someone had the bright idea to make it in individual pieces and then assemble them—enter the plastic kit.

Coming across an Airfix kit and considering the packaging’s artwork wanting, Cross approached the firm with suggestions how to improve it and—hint, hint—that he was the man for the job. They agreed. Cross worked for them as a freelancer from 1964–1974, an era now referred to as the Vintage Years.

This large-format book was conceived to satisfy demand by collectors for a comprehensive collection of Cross’s Airfix opus. Most of the images here appear for the first time in book form. Even if you saved the original box-top artwork (or, be still my heart, kept the complete, intact, unmolested boxes) you’ll see the illustrations here in their full format and not in the cropped form necessitated by the mostly oblong box shape and partly obscured by the Airfix logo and title. The Introduction sets forth Cross’s early interests and influences, appropriately illustrated with other people’s drawings, magazine covers, and also his own attempts—the earliest from the age of 12 which to him looked crude and to us lesser mortals unattainably slick.

Artists will delight in the chapter “Making the Painting.” This too is in response to questions from a public curious to learn of an artist’s technique and method. Cross explains the pros and cons of designer’s gouache, reveals that he had his artboards custom-made, describes the progression from rough pencil to final, and addresses the occasional tension, if not all-out disconnect, between what the artist envisions and the client wants. This early part of the book also shows artwork done for clients other than Airfix.

Unlike his previous books, this one shows the artwork in order of creation, thereby not only illustrating his own widening of the repertoire but also Airfix’s attempts at broadening their range so as to stay relevant in a changing marketplace. Each “main” illustration is shown on a full page, or the better part of it, and is supplemented with smaller images of roughs, alternate proposals, or related subject matter on the same or a second page. The captions explain the objects in detail, also often the overall interactions within a scene, and, as applicable, draw attention to specific issues of rendering or perspective etc. The illustrations are of planes, helicopters, ships, tanks, civilian and military cars/trucks, and a steam locomotive. Each model is listed by name/type in the Index. There a several instances of other examples of Cross’s Airfix art that already appeared in the 2002 book Celebration of Flight being only referred to but not shown. Readers, especially if they were particularly fond of a certain kit whose artwork they don’t see here, may find fault with this approach.

In terms of book-making criticism must be brought against the typesetter and, by extension, everyone who subsequently did not intercede to improve the grotesquely arbitrary and needless fluctuations in letterspacing.

Few people that once upon a time spent hour upon hour building model kits kept them. Regardless of the philosophical issues pertaining to their often military-inspired themes, assembly of these kits promotes manual dexterity, patience, application to a task, and learning something about the inner workings of the things that surround us. For all those who relate to that, looking at the images in this book will bring back fond memories.