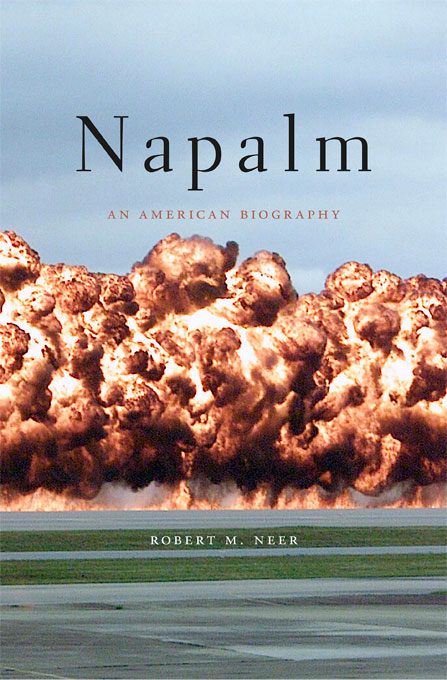 If, like Lieutenant Colonel Kilgore in the 1979 movie Apocalypse Now, you think that there is something to having a whiff of napalm in the morning (think: gasoline), then this book might be destined for you bookshelf. It is a great surprise to realize that this is probably the first book devoted to this topic.

That there is something about napalm that capture one’s attention is undeniable: the Pulitzer Prize-winning photograph taken by Huynh Cong “Nick” Ut of the Associated Press, “The Terror of War,” taken of nine-year-old Kim Phúc moments after a Republic of Viet-Nam A-1 Skyraider dropped its canisters of napalm far off target near Trang Bang in June 1972, inevitably springs to mind.

Similarly, anyone who has ever called in an air strike employing napalm will never forget the initial impression of the spectacular flames, the heat, and the thought, “How could anyone survive that?”—followed by another thought: “Thank God for napalm . . .”

Written by Robert Neer, a faculty member of the history department at Columbia University, this book happens to be published by an imprint of the university where napalm came into being, Harvard University. Neer follows the path of incendiary weapons through the ages to what began as “Anonymous Research Project No. 4” at Harvard in the days prior to and then following the bombing of Pearl Harbor. The new incendiary weapon, napalm, came into being on Valentine’s Day 1942 and entered service during late 1943 as an aerial weapon as well as a fuel for the flamethrower.

Written by an academic for a scholarly press, this is a well-researched, even thoughtful study of napalm—an incendiary gel that sticks to skin and can burn down to the bone—in warfare over the past seven decades. Professor Neer touches on its use from the “highly creative”—the use of bats to carry incendiary devices using napalm to destroy Japanese cities (which did not see operational use but resulted in the demolition of the structures of a newly-built auxiliary airfield in the United States)—to its use in one war after another, from World War II to the Korean War to the Viet-Nam War to its use by the Israelis again the U.S.S. Liberty in June 1967. Neer also covers the protests during the Viet-Nam War against the use of napalm. This is discussed in some detail, taking up a major portion of the book, along with the international protocols that center on the use of napalm—or rather, the restrictions on its use.

As the author dryly notes early on in the book, “Napalm was born a hero but lives a pariah.”