Jaguar, All the Cars 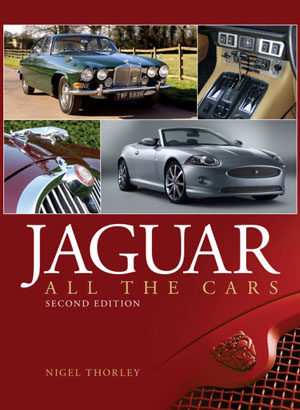 Thorley has written several excellent books on the marque. While past books have concentrated on specific models, this one covers the entire range of cars since the beginning, with a particular emphasis on postwar vehicles. Its small format does limit the amount of detail the photos can show. First published in 2003 this new second edition is now larger by 80 pages and includes the X-350 series, XK, XF, and current XJ models.

“All” cars really should have been amended to “All Production Cars.” This is in passing alluded to in the Introduction but by missing from the main title could easily raise readers’ expectations. There is no mention of the C or D Type racecars or any of the modern ones. Not even the XJ220 is included even if it was for all practical purposes a production car, albeit short-lived and ill-fated.

For someone looking for an excellent Jaguar reference book at relatively modest cost, this book has much to commend it. Beginning with a brief synopsis of Jaguar heritage that includes a useful chronological list of all models (over 200 in 18 distinct series) and a description of the rightly famous Jaguar engines, the book goes on to present each model in some detail. “Some” is the operative word here.

The book’s price, size, presentation, and contents mean this is a handy take-along overview-type reference book not a definitive all-encompassing marque history. It presents model years and production figures, acceleration times, factory color schemes, and many subtleties of model identification. Included are the majority of running production changes by year, available options, prices, and an interesting look at many UK and Continental models and features entirely unknown in the US. Most of the photos are modern ones of restored (or current, still new) cars but there are a few period and coachbuilder photos.

Several items in particular catch the eye. One is the attention given to wheels on newer models. It seems as though Jaguar had about four times as many wheel styles as they had car models since the beginning of the 1990s, and trying to identify the name of a particular one on your car can be baffling when replacement is called for. The author thoughtfully provides color photographs of each wheel type, as well as a factory name which has been assigned to most. Another interesting item is the inclusion of several models not sold in the US. Whereas Jaguar positions itself in the US as a purely prestige brand, in most European markets it aims at the low-cost and low fuel-consumption segment. In addition, there are several models that are badged as Daimlers in the UK but as Sovereign or Vanden Plas models in the US. There are also some tuner-modified high-performance models that never made it to the US.

Appended are a postwar production graph and a chassis number identification table by series. This latter is applicable to the post-1978 cars and an immensely useful tool. The then implemented internationally recognized VIN numbers tell the complete story of a car—if you know how to interpret them. No Index.

The Science of Formula 1 Design: Expert Analysis of the Anatomy of the Modern Grand Prix Car »
« The Speed Merchants: A Journey through the World of Motor Racing, 1969–1972