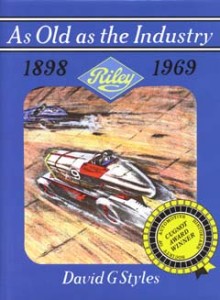 When it first came out in 1982, this book was received with much acclaim and the prognostication—not just by the Riley world—that it couldn’t be improved upon. This despite the author’s insistence that his book can neither be “complete” nor “100% accurate” given the source material it is able to draw on. Still, in the almost 30 years since, no one has tried. Or seen the need to.

This was Styles’ first major book and he has added more than a dozen since, several of them on specific types of Rileys (Riley 75, Sporting Rileys: The Forgotten Champions, Riley: a Centennial Celebration, Riley: Beyond the Blue Diamond). So, if Rileys are what you want to know about, don’t bother looking elsewhere. Since buying his first one as a young man he’s owned several, both pre- and postwar, and has been active in the Riley club world since the 1960s. As the Riley Register’s historian he is singularly well equipped to take both a micro and a macro view of a storied firm that Styles believes has contributed more to the first 40 years of the development of the motorcar than any other in Britain.

As so many early carmakers, Riley too had its start in bicycle manufacture (1890). And as so many carmakers—especially British ones, suffering under years of misguided industrial policy—Riley had a complicated history, forced into various mergers until car production ceased in 1969. The name, now dormant, is one of several British marques owned by BMW.

“We make far too many models, of course, but then we have a pretty fertile design department.”
—Victor Riley, 1936

Styles devotes the first chapter to an abbreviated overall history of Riley, kind of like drawing a basic map so as to orient the reader for the subsequent in-depth excursions. A caveat: the author only covers the Riley companies’ products (including cycles, engines, generators, railcars, specials) but not company politics or competition history, deferring for the latter instead to Tony Birmingham and Sidney Haddleton’s respective works for those topics. Rileys had competition success second to none and the reader should definitely explore this further. Styles does make reference, but only in passing, to such high-level issues as the Riley White Knight that was the basis for Raymond Mays’ ERA racing triumphs.

The book is divided into two volumes. The first covers the 176 models and 40 years (1998–1938) of the original Riley Ltd., the second deals with the 17 models over 30 years (1939–1969) after Riley was sold to Lord Nuffield. Philosophically there is, of course, a certain divide between these camps and the purpose of a book such as this is to educate each side as to the merits of the other.

In chronological order each chapter describes a group or type of models in text and photo, followed by detailed specs (incl. prices) and illustrations for each chassis type. Specific to volume I is that these sections also contain reprints of period magazine articles and that individual chapters cover color schemes, “Rileyoddities” (engines, railcars, specials etc.), owners’ views and road tests. The eight vol. 1 Appendices cover model identification, registration and chassis numbers, facsimiles of several patent applications, model names with production dates, Riley family members and trademarks, worldwide Riley clubs, and a listing of select competition results (year, event, model, finish). One of the two vol. 2 Appendices covers model identification (much easier for the post-1939 cars!), another reproduces road tests for cars of the Nuffield and British Leyland eras.

There is a bit of on “old-school” look and also tone to this book. If you are familiar with the opulent books under the current Dalton Watson imprint you may wonder why this one looks rather different. It is because this 2002 edition is a straight pick-up of the second (revised) edition of 1992 that was done by the “old” Dalton Watson company of Lawrence Dalton. Lawrie’s books had a signature look and feel, and uniform size, paper, and even typesetting. All his books looked like they belong to one long series.