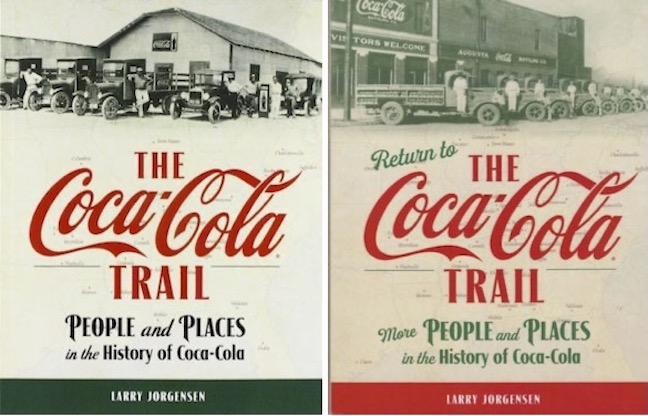 People and Places in the History of Coca-Cola

More People and Places in the History of Coca-Cola

There are many fascinating and interesting facts and stories just waiting for the reader to discover on the pages of The Coca-Cola Trail and its sequel Return to the Coca-Cola Trail. While all chapters involve some aspect of Coca-Cola history, the stories aren’t so much about the beverage itself or even its maker but rather, as part of the subtitle indicates, The People and Places to which I’d add also the vehicles, buildings, and architecture and so much more.

As an example, the first bottler, and because it’s still in business today is also the oldest as it became the family’s multi-generational business. One of the family members also owned a minor league baseball team and stadium and was the first ever to install lights in his stadium thus holding the first ever night game, in 1930 which, of course, forever changed baseball.

That same family also contributed financial support to a start-up air service that grew to be Delta Airlines. As a director on Delta’s board and major stockholder with 500,000 shares, he also dictated that Delta’s headquarters and its annual board meeting would be held in his Monroe, Louisiana location. He prevailed until the day in 1941 “when it moved to Atlanta, ironically the home for another fast growing company, Coca-Cola” with which he, of course, was associated.

The covers, front and back, of each book feature some of the vintage images. However, unlike most books which identify cover and title page images—often on the masthead page—these books do not. So I set out to discover which vignette within each book the front and back cover images were related to. Try as I might to find and identify all, some eluded me. So I queried the author/publisher Larry Jorgensen. He replied, “The ones you couldn’t find were choices made by my graphic artist from photos that were from the time period which had been included in her working file. Since I have NO artistic talent, I let her run with it.” One of those images is the cover of the Return to volume. So unless some knowledgeable reader of these words recognizes the location and shares that information with us, it shall forever remain a mystery. 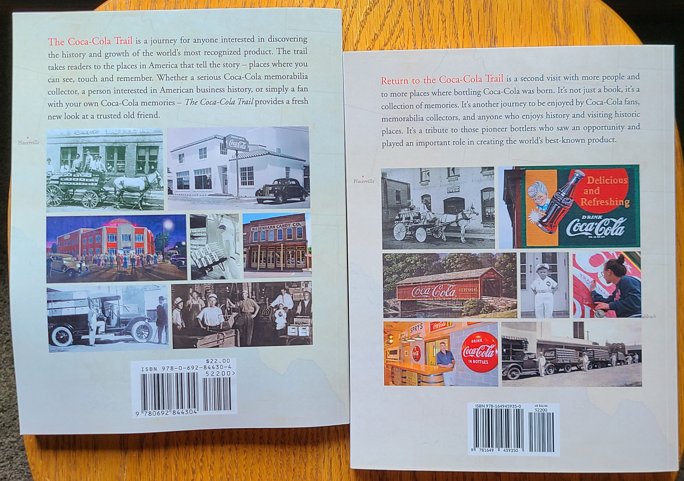 Jorgensen discovered stories and buildings in locations across the breadth and depth of this continent. In all chapter stories are located in twenty-five states plus two Canadian provinces with a preponderance in the southern tier of the US for, of course, Georgia is where Coca-Cola originated. As its popularity gradually increased so too did its distribution. A fourth-generation bottler in Louisiana named Randy Mayo correctly observes in his Foreword, these are “history books and travel guides all rolled into one that will transport you back to another time and recall happy memories of days gone by.”

The two volumes record a lot of history. There are vehicles ranging from the horse-drawn wagons to today’s delivery trucks and all that’s in between. There’s architecture showing some really grand buildings with many historically significant and restored, often being repurposed. There are collections and museums everywhere. Outdoor signs painted on buildings are told about including their locations with numerous ones being restored and preserved. 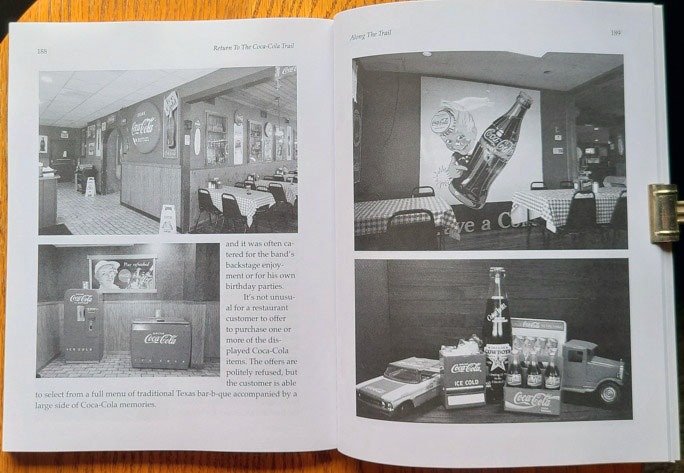 All interior images are black and white. This page pair along with the previous image of back covers hint at the range of stories and memorabilia offered in the two books.

One chapter tells of a project embarked on by citizens of Griffin, Georgia. Townsfolk were “encouraged to provide a photo of their own Coca-Cola memory” resulting in a large photographic exhibit showing multiple generations of family life that included Coke in some way. There’s a chapter about the eighty years a Coca-Cola sign has been on New York’s Times Square with the most recent iteration installed in 2014 and is said to be one of the world’s largest lit by 2.6 million LEDs.

Several chapters relate how bottling of individual servings began and of the evolution of the shape of the bottles. In another chapter, readers learn how those bottles acquired their distinctive greenish tinge. Now, of course, both the shape and color are patent protected. You’ll even learn of a phenomenon that occurred in 1970 when a tornado’s on-ground footprint through Lubbock, Texas included the Coke bottling plant and as it passed over that plant its low pressure gradient “sucked the soda out of the bottles, while leaving the empties with caps still on top.”

This image from the first book shows, as indicated, the chronological evolution of the shape of the Coca-Cola bottle from the very first to the last as cans replaced bottles. The last returnable bottle was filled October 2012.

If Corvette is America’s sports car, surely Coca-Cola must be America’s beverage although today can there a land or a country in which it isn’t somewhere available? These books—both entertaining and informative—are easy reading and would indeed be great to take along on road trips helping you discover places you might not otherwise realize were there.

People and Places in the History of Coca-Cola

More People and Places in the History of Coca-Cola

Posted Under: Other Genres, Travel | Author: Helen Hutchings | No comments yet