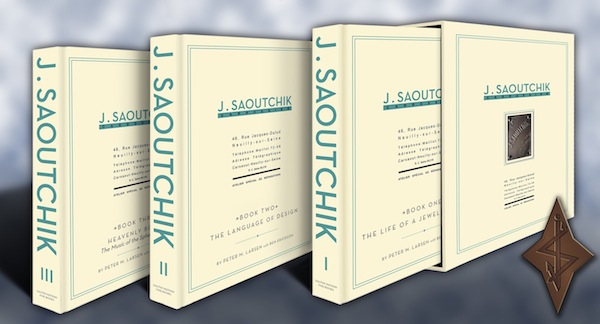 Over 1100 pages (or about 15 pounds if that sounds more impressive) . . . on a subject you probably never heard of. Do you need this book? Sure you do, especially if you are a bibliophile or have a thing for French coachwork.

This set of books is so outside of what is “normal” in publishing that writing only a short review seems entirely inadequate. Even after having actually read the whole thing it is not really possible to offer a bird’s eye perspective of a book (we’ll stay with the singular form even if it’s a 3-volme set) that is all about nano detail. 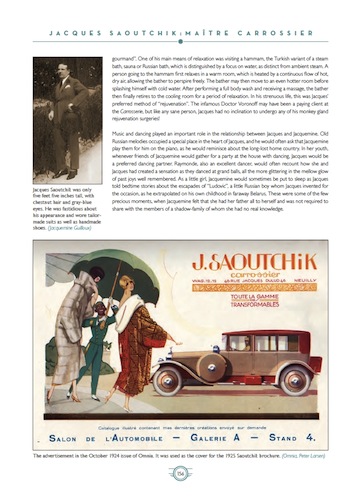 For the sake of context let’s first of all establish that this publisher, Dalton Watson Fine Books, started this particular treatment—multi volume, super premium presentation, slipcased, in a custom carrying box—two books ago, first with the Talbot (by the same authors) and then the Cunningham set. This latest offering takes that up a notch by sporting a metal replica of the coachbuilder’s plate on the slipcase.

In the abstract, $500 is not chump change but considering the authors’ time, the small print run of 500, and the supremely impressive production the book is a terrific value. It would be desirable even if it had flaws, in the same way a supercar is desirable even if it is imperfect. But, unlike a car, a book like this cannot be measured against an absolute parameter because, at the level of micro analysis the authors present, only they now possess the deepest, most comprehensive grasp of the subject. Other experts—many of whom consulted on this book—may have their individual slices of knowledge 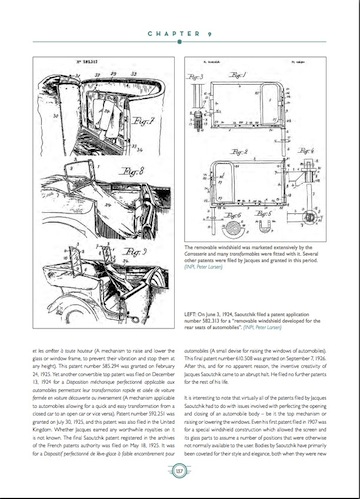 Russian-born Iakov Savtchuk (1880) switched to coachbuilding in 1906 and earned a reputation for quality work and often wildly extravagant designs in the French idiom. French coachwork looks like nothing else, even today and most definitely in the Golden Era of custom coachwork. On the big-picture level, the book records every body built by Saoutchik 1907–1954, with chassis numbers where known. On the micro detail level, the book records seemingly every breath Saoutchik ever took and every thought he ever had. 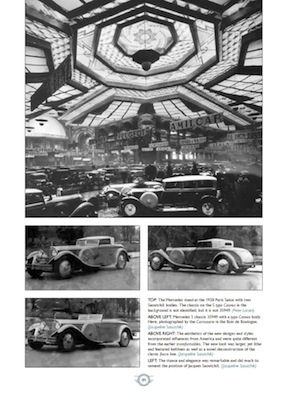 Vol. I (The Life of a Jeweler in Steel) covers the personal side of the story, using many private pictures never before seen in print. On the purely human level, this would be a story worth telling even without the cars—not least because the man had, at the same time, two separate families! Vol. II (The Language of Design) moves into the technical realm, featuring many coachwork drawings and design analyses. It also includes an essay by American restorer David Cooper about the restoration of a 1947 Saoutchik Delahaye 135. Vol. III (Heavenly Bodies) is a treasure trove of some 800 photos old and new, many not published before. 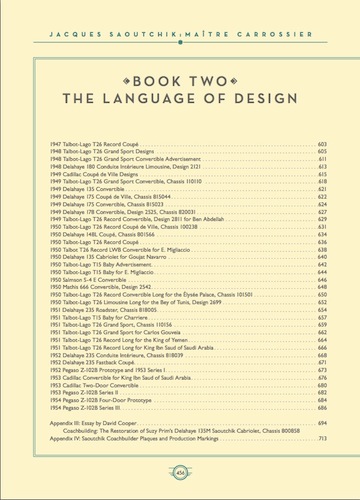 Larsen is mindful that today’s world is running on 140-character tweets—a harsh place into which to send a book that’ll take months to read and years to internalize. He is the first to raise the question: does the book have to be this long? And he himself offers a condensed version, all of 31 words long: “There once was a Russian carpenter who went to Paris. There he spent about 50 years building some fantastic cars. Then his company went bankrupt and he died. End of story.” But Larsen is not only a gearhead, he is a Fulbright scholar and holds a Ph.D. in English literature and semiotics. Words are his thing, he cherishes them, and he unabashedly raises “digression” to an artform. Co-author Erickson too holds a Masters in linguistics but here attends mostly to the data wrangling end. So, readers who can’t be bothered to read will just have to skip the words . . . it’ll be their loss, and even the more than 1900 illustration cannot substitute for them. 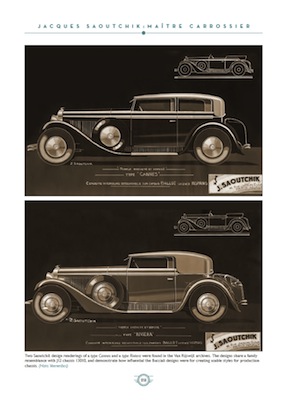 It should be noted that the authors were able to make contact with Jacques Saoutchik’s daughter Jacquemine and her family and that this has yielded insights and actual materials that have further elevated this book.

This book is as much a celebration of a Master Coachbuilder as it is of bookmaking, and of scholarship.

Won the award “2014 Publication of the Year” (sponsored by Hortons Books) at the International Historic Motoring and a Grand Prize for “Most Beautiful book of the Year, 2014″ by the Festival Automobile International organization. 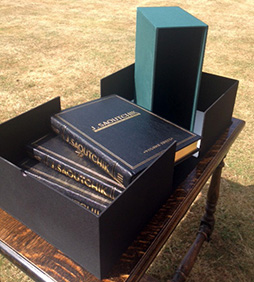