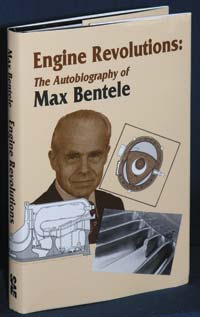 Max Bentele (1909–2006) was a German mechanical engineer/scientist who used extensive hands-on testing and mathematical analysis of the resulting data to systematically track down problems in engines and to analyze the viability of proposed new engine concepts. He received his PhD in gas flow dynamics and became an expert in gas sealing and jet engines, starting his jet engine education in World War Two Germany by solving the exploding blade problem that basically prevented Germany’s early jet aircraft from performing a meaningful combat role.

I consider this book essential reading for anyone seriously interested in the technical reasons that German jet planes were never a real factor in the air war over the Continent.

Bentele describes in detail how he and his team solved the turbine blade failures of the Junkers Jumo 004 that caused German jet engines to self-destruct, and why the lack of cobalt and other strategic materials made the problem almost unsolvable on a practical level. He also relates that even after the advent of his clever hollow air-cooled vanes stamped and folded into the proper shape (air-cooled to avoid the weakening/breaking of low alloy metal in the high heat needed to obtain high thrust levels at full power), and the dampening of the destructive gas flow vibrations that were fracturing the blades (solved by raising the blade’s natural frequency by changing its shape), the engines were still not quite ready for prime time in 1945 because they suffered from “flameouts during landing and overheating at takeoff.” In short, German jets were never going to be a serious factor unless the war had lasted into 1946 or 1947, which it did not. Bentele also points out that the Germans were not the only ones working on jet engine technology. Both the Americans and the British, in particular, manufactured jet engine prototypes during the war that were “neck-on-neck with us [the Germans].”

After war’s end Bentele traveled around Germany looking for work, initially turning down an offer from the US in 1946 to move to Wright Field, Ohio for room and board and $6 a day pocket money. By 1955, after a string of engineering jobs in Germany and working for the British to design a gas turbine tank engine, he did take a US job with Curtiss-Wright, moving again in 1967 to AVCO Lycoming where he retired from various management/research roles in 1974. Bentele was also considered one of the three people responsible for the successful commercialization of the Wankel engine, but that’s only the tip of the iceberg. In this book you will learn in detail why sleeve valve engines from the 1920s–up never made it (the advent of sodium-cooled hollow exhaust valves, and higher octane fuel with lead), and the weak points of various rotary valve designs, including early Wankel, Cross, and Aspin concepts—that’s all contained in just the first 10 pages! The rest of the book is just as densely packed with insight and observation, so staying focused is mandatory.

Some of Bentele’s descriptions read a bit like the jargon used in a patent application, so the going at times can be slow and exacting, requiring rereading in places to obtain a clear understanding of what he is saying. “A conical valve, coaxial with the cylinder”—we all know what that looks like, don’t we? Or, “The square/cube law holds for geometrically similar or equivalent reciprocating engines, the power increasing with the square of the linear dimension and the volume with the cube.” Real wisdom there, but it takes a bit of thinking to understand.

This is a Society of Automotive Engineers publication, so its design looks industrial, the result perhaps of society members reading too many text books as children. The graphic design of the page is generally dark and tedious, versus the easy readability one would find in a well-designed “popular” book of the same subject. The pictures are all uniformly washed out and gray, evidently another SAE design tradition.

Each paragraph is separated by a white blank space (like the design of this internet reader-friendly review), instead of just a paragraph indent, making the copy look like a collection of quotes from Chairman Mao. If a lighter-weight typeface had been used, then normal paragraph indents would work visually, and 15% more space would become available for additional or larger photos and text. The readability of the book suffers from the type being a little cramped and too dark.

None of this is Bentele’s fault, of course, so keep in mind the information contained within the book far outweighs the poor presentation! Bentele died in 2006 at the age of 97, and with his passing goes a huge quantity of first-hand information on subjects of interest to serious aeronautical and automotive historians. This book contains valuable developmental data and insights on early jets, turbochargers, Wankel engines, and a great deal more. For those of you unafraid of science and math, his personal papers are archived at the Detroit Public Library (automotive engines) and the University of Wyoming (aeronautical engines).

A book definitely worth owning for the information contained within. Excellent Index, Foreword, Preface, Table of Contents, Introduction, 12 Appendices and Biography.