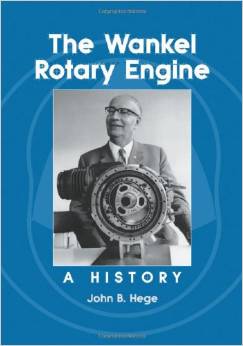 Designing the perfectly efficient internal combustion engine is an exercise in futility. Beyond certain theoretical limitations, any motor is a juggling act between flexibility, noise, vibration, emissions, and fuel consumption. It boggles the mind that after a hundred years of trying, the Otto cycle engine (and its diesel cousin) continues to be the prime choice for powering cars and trucks.

The Wankel was one of the more innovative and promising attempts at something new, but it, too, did not change history. Despite its many virtues, political and economic events in the 1970s halted most of the work then done by the various companies that had taken out licenses (known as the Wankel Club) and participated in a technology-sharing agreement.

Written by a practicing auto tech with an interest in the subject since childhood, the book is commendably clear in describing the Wankel’s operating principles (also well illustrated) and juxtaposing them to the Otto cycle. The book covers basic Wankel history and applications but says little about Felix Wankel (1902–1988, said to have never driven a car himself) nor does it mention two other rotary engines: the Anidyne (US) and Sarich (Australia).

Several chapters highlight the contributions of various licensees, one of whom Rolls-Royce (!) whose engineers the author credits with being uncommonly “headstrong and adventurous” in the 1960s. (Index)

Cherry’s Model Engines, The Story of the Remarkable Cherry Hill »
« A Chronology of Aviation