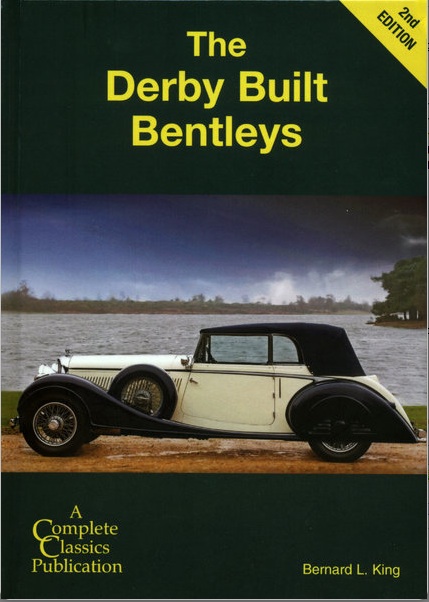 Following the 1931 takeover of Bentley Motors Ltd. by Rolls-Royce Ltd., the first Bentleys to be built by the new owner left the Derby factory (hence the moniker) in 1933. Model development was interrupted by WW II and not resumed afterwards.

In 1997, Bernard King issued the first of a series of books that he intends to, one day, encompass the entire Rolls-Royce/Bentley range accounting for every single chassis ever built. Even for this Great Tabulator, whose house one imagines to be entirely wallpapered with index cards, this has become a rather drawn-out project, with so far only 8 of ultimately 16 volumes finished.

Rolls-Royces and Bentleys have an uncommonly large survival rate, largely due to the extraordinary build quality—reflected in the high cost of purchase and upkeep—and certainly aided by the often colorful ownership history. Also uncommon, in fact almost unique in the world of cars, is that Rolls-Royce and Bentley motorcar history revolves predominantly around the chassis numbers, with factory records (build cards) having being kept continuously and still available today.

The chassis numbers, in turn, are the key to King’s books in this “Complete Classics” series. The books are not monographs about the particular model/s but strive to be the definitive inventory of every single car in a model run. While he provides an overarching narrative, the core of the books is tabular material, i.e. the chassis registers that list every car built, in sequential order by series. These listings also show engine number, delivery date, coachwork, body number, first owner, and current whereabouts along with other relevant notes. The books are intended to be carried along in the car and their handy European A5 format is ideally suited to fit in glove box or coat pocket.

The listings are preceded by many pages of fairly comprehensive information about the development of, in this case, the 3½L, 4¼L, and Mark V Bentleys. This is in narrative form and covers specifications, performance data, modifications, and road tests. A treatise on the “Flying B” hood ornament as well as brief coachbuilder histories (with addresses and respective output), show-car info, buying tips, and even references to Bentleys used in movies round out the picture. These books are thus invaluable tools for the owner and especially researcher, and there is nothing else like them!

Several of the books in this series have been re-issued in second editions if enough new material surfaced since the first one. This is the case with this one, CC4, first released 12 years ago and out of print for quite some years. It adds 72 new pages and 30 color and 64 b/w photos. Moreover, it now accounts for the whereabouts of an additional 74 cars, bringing the total to 1777 known survivors (of 2518 produced). Last but not least the new edition sports a sturdy hardcover, and 33 of the new photos are in color.

Even if you already have the first edition, bestow it upon someone else. As always, readers/car owners are encouraged to contact the author with any relevant information and help make “Complete Classics” the complete inventory of Rolls-Royce/Bentley cars. A re-issue of CC2 (25/50 hp and Wraith) and first editions of CC7 (20 hp) and CC12 (Bentley Continental) are planned for later in 2012.

Brooklands »
« The Automobile and American Life