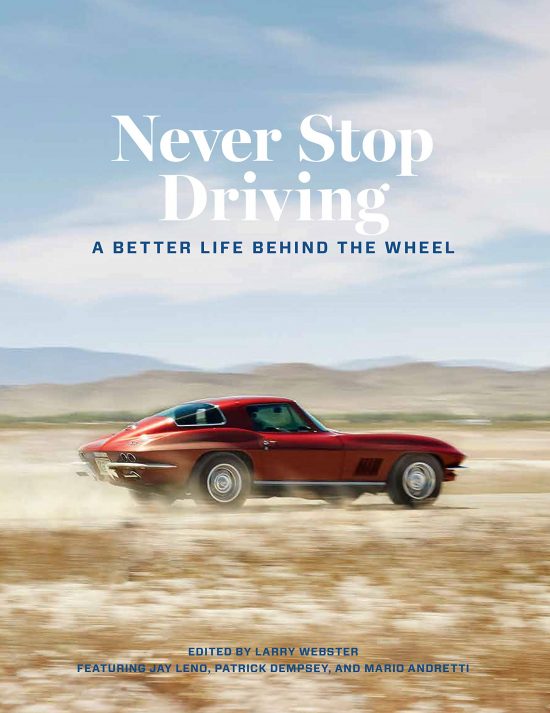 Unsure what this book was or would prove to be—and especially as it appeared to have been commissioned or sponsored and paid for, at least in part, by Hagerty Insurance Company—your commentator was pleasantly surprised with the turn of each page. Each of the four main writers’ words proved to be well crafted as each celebrates and shares the vast and varied panoply of areas and ways in which “the world of the automobile” can be experienced and enjoyed, making this book a delightful light read.

To be clear, lead author Larry Webster, after serving on the staff of various auto magazines is now a Hagerty vice-president and a weekend SCCA racer. Zach Bowman went from autoblogger to R&T staff writer. Jack Baruth raced BMXs professionally before morphing into practicing auto journalism. And Brett Berk’s words are seasoned with experiences and understanding gained from applying his Master’s in education for 25 years to his classroom students and now writing, for a variety of notable publications, on topics ranging from autos to politics and popular culture.

The various contributors write about the myriad of ways automobilists exercise their interests. Some address the pleasures enjoyed while deciding where to focus their interest, finding that “dream vehicle” or repairing and then caring for it. Others introduce a reader to some interesting “practioners” of the hobby among who are the respected and admired Peter Egan, hobbyist and also professional Le Mans-winning chief mechanic Dan Binks, or craftsman and restoration wizard Bruce Philip. The pleasures found at the track or shared with other family members, especially the youngters, are explored a well.

One of the concluding chapters discussed generation-related changes in attitudes regarding cars and transportation but didn’t speak as straightforwardly as Sam Smith, an R&T compadre of this book’s authors, did in his article published in the December 2019 issue of that magazine. “The Uncomfortable Conversation” is highly recommended and thought provoking reading either in the print issue or online.

Company owner McKeel Hagerty penned the Epilogue. In it he acknowledges the changes which include the on-the-cusp-of-becoming-reality self-driving cars. He closes with these words, “I’ll leave you with this call to action. It’s up to us to preserve and protect our collective automotive past. It’s also up to us to create a vision for the future whereby the cars we love to drive are allowed to share the road with cars that drive themselves.”

Whether it “just happened” or is very much on purpose, just prior to McKeel Hagerty’s “Epilogue” is a thirteenth chapter. It is titled “My Last Drive” and contains the responses of fifteen people—each highly recognizable—to the question, “If you could predetermine your final time behind the wheel, where would you go? In what? And with whom?” To name a few of the respondents, there are “last drive” responses from Jay Leno, Ed Welburn, Bob Lutz, Bill Warner, Dario Franchitti, and Mario Andretti.

Never Stop Driving is a book well worth the time you’ll spend reading it for pleasure. And, for the more contemplative readers, there’s an additional facet to provoke more creative thinking—especially for those who take up the challenge and seek out Sam Smith’s article.

A Better Life Behind the Wheel

Posted Under: Youth and Young Adult (YA) | Author: Helen Hutchings | No comments yet