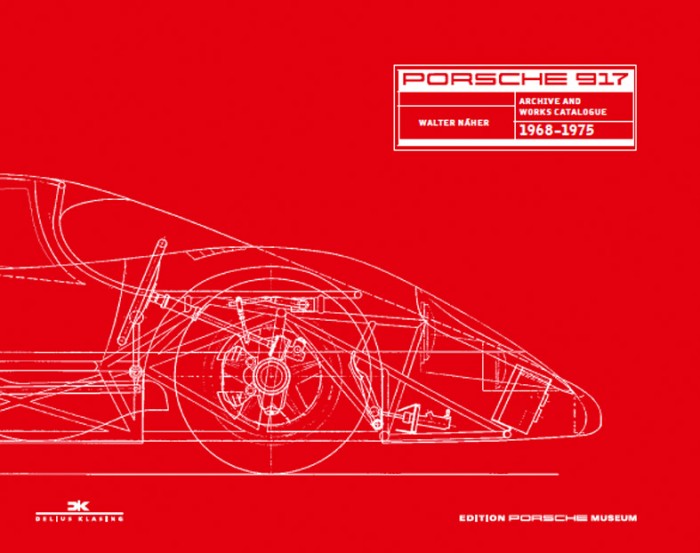 (Now in English!) Take it off, take it off! The dustjacket, that is. It unfolds into a big 37 x 29″ poster, shown below, and you don’t want to scuff the edges even if you don’t hang it on the wall. Besides, there’s a lovely 917 imprinted in silver foil on the outside front cover. 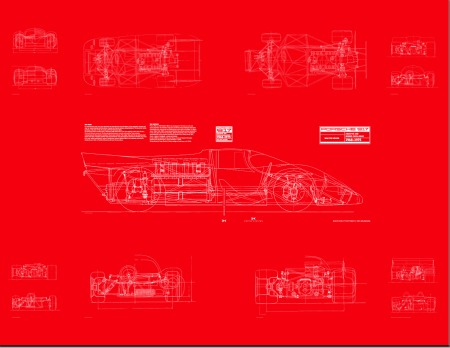 Absolutely everything about this book is unusual, not least that someone saw fit to publish it at all because it is so highly specialized. When it was first published, on the occasion of the 917’s 40th anniversary in 2009 and only in German (now already in a 2nd edition), a number of superlative 917 books had been or were about to be published and it was difficult to imagine how each would be different. This book’s author had of course something going for him that the others did not: he had worked on the 917. (Head designer and 917 project director Hans Mezger’s book didn’t come out until 2012.)

Näher had joined Porsche’s Testing Department fresh out of engineering school in 1969 (the 917 project had begun in June 1968, five years after Ferdinand Piëch had joined the company and meanwhile risen to Head of Development). In later years he moved on to the Mercedes Group C Project and the Sauber F1 team, his 917 days a distant memory—until he came across one at the Goodwood Festival of Speed in 2001. Something about that car’s serial number (Näher doesn’t specify what) motivated him to sequester himself at the Porsche Archive to research his “speculations.” This was merely intended to satisfy his personal curiosity but he took down “short, factual descriptions” as he went along. He created data files on 65 chassis, including partially built and customer cars and turned his findings over to the archive, just in case anyone else might ever have questions. And that’s when someone had the bright idea to expand on that material and turn it into a proper book. This, then, explains this book’s unusual approach and unusual title.

The most rudimentary way to think of this book is as reproductions of a bunch of primary sources found in the archive, now collated into some semblance of order and made digestible by adding pertinent narrative to connect the many dots. It’s sort of as if you were working in the archive yourself. If this gives you pause, realize that the end result is a fantastically clever and original and deep book. And it so well executed in terms of design that even if you’re not a 917 geek you’d want it just to marvel at what all a book can do! 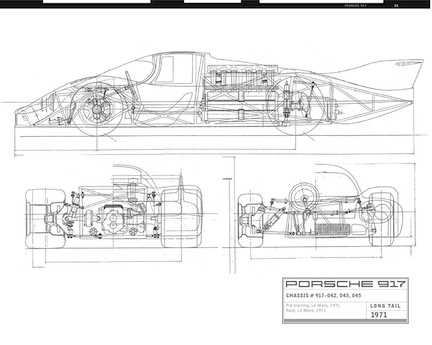 That last sentence may seem like hyperbole in view of the fact that the first 40-some pages contain blueprints, one after the other and nothing but. These are preceded by a really good Introduction by Näher (how this book came to be) and a really good Foreword by Mezger (how the 917 came to be); they are followed by a chassis number list and then a 1- or 2-page synopsis in text and in most cases photos of each of the 65 chassis. A few more tables and lists dispense with racing team rosters/results and technical specs and power curves by model, and only after that, including 7 consecutive pages of engine close-ups—over 120 pages into the proceedings—does the book become more conventionally book-like, meaning actual narrative accompanies a story that is still dominated by in-house illustrations, be they photos or memos or more drawings. 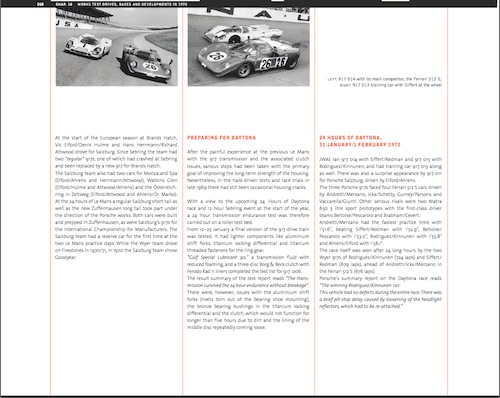 If you have all the other important 917 books, consider this one a prequel or, better, a source book. Very much of what you’re shown here has not been used before, or not in this form: lots of styling models, mock-ups, photos of the shop (the amazingly large number of people working seemingly elbow to elbow really bringing home the point that getting the first 25 homologation cars done was an all-hands-on-deck exercise!), facsimiles of press releases and hand-written notes, and many shots (some in color) of the cars being assembled, serviced, and driven.

From micro detail (exterior paint and filler are more than twice as heavy as a driver’s seat) to big-picture aerodynamics philosophy to the capriciousness of FIA and later also Can-Am racing regs that first made this supremely competent car possible and then killed it, this book practically puts you in the rooms in which the 917 was conceived. Many drivers, mechanics and of course colleagues contributed to or reviewed the text.

So, no 917 library would be complete without this book but also anyone who studies book design should take note. To give just one example of the latter, consider that the “917” script on the top edge is not merely printed flat on the outside of the book block but is

created by each page having a ¼” black stripe printed across the top (visible in most of the sample pages here) which has white spaces in just the right places to form the numerals when seen from the side. That the endpapers and bookmark are orange and the headband blue is no accident. In fact nothing about the design is without thought, or is generic or simplistic. Just take a look at the tech drawing-like layout for the Table of Contents: 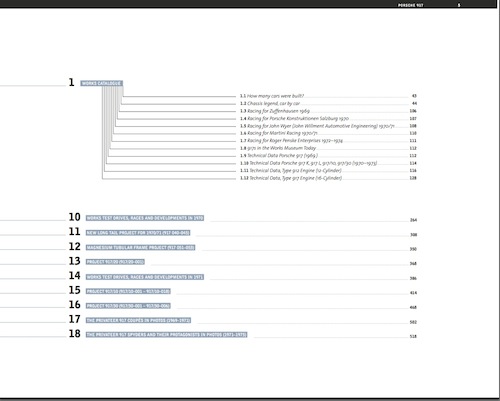