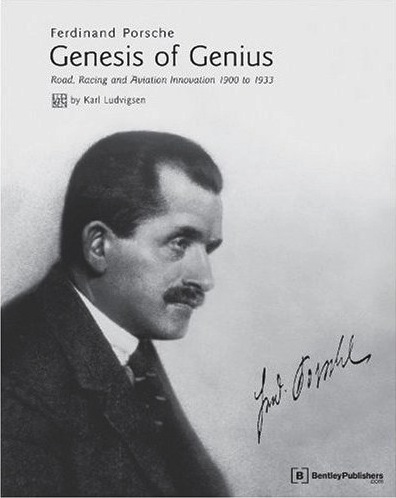 Not to give the publisher any ideas, but this book is too cheap!

If books were priced like cars—badge on the hood (a “Ludvigsen”), horses under the hood (500,000 words), trim (flocked cover with debossed signature, acid free paper, a bookmark even)—this book should command a premium price. For a paltry $100 you are getting a veritable education in matters political, economical, scientific, and psychological. It isn’t just about one F. Porsche, precocious youth and ambitious engineer, but about the world and times he lived in and the overall history of early motoring. Billed as a prequel to Ludvigsen’s bookshelf-bending three-volume opus Excellence was Expected this no less substantial book looks at the first three decades of Porsche’s activities. This “Austrian phase” is much less documented than Porsche’s seminal later work on the KdF Wagen/Volkswagen or the Auto Union Grand Prix cars. Speaking of the latter, the book does not go into any detail as to Porsche’s position vis-à-vis the Nazi regime. (To politically sensitive readers we would say that there is almost certainly no merit in reading anything into this.)

Electric cars may be on everyone’s mind nowadays, but already around 1900 they were a then 24-years-young Porsche’s main preoccupation. Says Ludvigsen, “For too long these early years of Porsche have been shrouded in ignorance compounded by myth.”

Porsche’s eldest grandchild, Ernst Piëch, who wrote the Foreword, not only agrees but was the instigator behind this publication. For two decades and more Piëch has moved heaven and earth to find, collect, and restore some of his grandfather’s most important Austro-Daimler cars. Inevitably, the search turned up other artifacts as well, some of which not known before. By thus incorporating a considerable number of new discoveries coupled with Ludvigsen’s famously meticulous five-year research effort and full support from the Porsche Historic Archive, this book advances the body of knowledge and paints an immensely rich picture. In chronological order and divided into themes it covers the Lohner-Porsche, Austro-Daimler work, the Sascha racecar, and Porsche’s role in the Wanderer and Auto Union cars, trucks/military vehicles, and aero engines.

A book review cannot hope to do such a complex book justice without turning into a book itself. Suffice it to say, then, that the book is truly comprehensive and also written most comprehensibly. While the text makes frequent and detailed reference to family matters and inter/personal aspects this is the biography of an engineer and thus there is, as there must be, quite a bit of technical minutiae although not to the extent that it would frustrate the general-interest reader. That said, it is the very appeal of this book that the writing is of such clarity that it cannot fail but to instill such a sense of compelling interest that a reader will become eager to want to learn about those things that may be new and unfamiliar presently. (The highly specialized reader will find in the two-page bibliography enough material for years of further study!) Footnotes are conveniently dispensed with on the very pages on which they occur. The photo captions are very detailed and various sidebars further expand upon the text in the form of newspaper/magazine excerpts and extraneous bits such as Porsche’s horoscope. (Readers who take stock in astrology will note with satisfaction that Porsche, a Virgo, was the walking embodiment of his chart.)

Photographically, too, the book is a treasure trove, with many new images of young Porsche’s life and circumstances. All are in b/w, many of them full-page or even bigger. There are also several technical drawings and facsimiles of correspondence, patents, ads, and newspaper clippings. A special feature of the book are seven color 3D fold-out cutaway airbrush drawings of cars (plus one engine) by Swiss technical artist Wolfgang Franke. (A tip: if you have a steady hand and a sharp knife, you may want to trim a sliver of paper off the outside edge; it’ll make folding the drawings back into the book much easier.) The table of contents is very detailed and there is an index.

Some of the material sourced for this book ended up on the cutting room floor but was given a new lease on life in the form of a companion volume, the 2008 German/English book Professor Ferdinand Porsche, Erhabene Werke/Sublime Creations by the publisher Delius Klasing (ISBN-13: 978-3768825405).