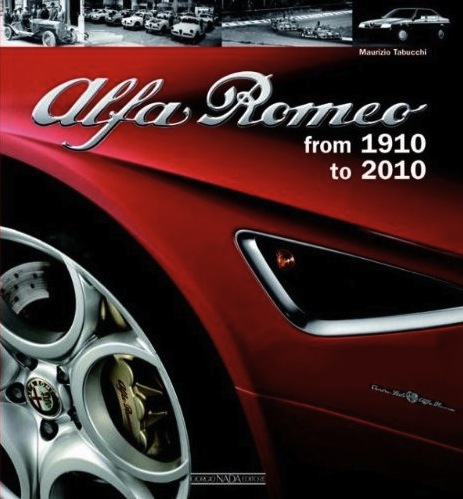 Alfa Romeo or A.L.F.A.—Anonima Lombarda Fabbrica Automobili which translates into Lombard Automobile Factory, Public Company—or simply Alfa is in the enviable position of celebrating 100 years of operations, 1910–2010. All sorts of books will laud the centenary, and Italian publisher Giorgio Nada of Milan, Alfa’s hometown, has produced two. One is a €500, 200 page limited edition of 1998 copies (Alfa Romeo. The Official Book – Centenary Edition) by various authors and then this much more affordable tome.

“When I see an Alfa Romeo, I tip my hat!”
—Henry Ford, 1939 (long thought an apocryphal—and unlikely—remark but confirmed in 1988 by Dr. Ing. Pierugo Gobbato in an interview with Griffith Borgeson as having been made to Gobatto Sr. during a visit to Dearborn.)

The book covers in chronological order the ups and downs of the firm; the emphasis is on the product but there is useful if not extensive reference to the overall political and economic situation and ancillary topics of technical relevance such as aviation.

There are also quite a number of sidebars covering personalities such as Merosi and Piero Dusio, Ferrari, Nuvolari, Varzi, Campari, Jano etc. Speaking of personalities, the Foreword is by Giovanni Giuseppe Gilberto “Nanni” Galli (b. 1940), who campaigned Alfas in saloon and sportscar racing in the 1960s and 1970s and made a 1970 F1 appearance at the Italian Grand Prix with a McLaren-Alfa. From the early Darracq days—there are even photos of ads of Nicola Romeo’s pre-Alfa Romeo marine Bolinder engine and farm tractor—to the current MiTo (pronounced me-too) mini car, Alfa’s history is told briskly and engagingly and the reader will get a good appreciation of what made Alfas different, and special. It’s only a few years ago that Alfa’s “8C” and “6C” models of the 1930s began to fetch record, multi-million dollar prices at auction but you won’t learn that from this book.

Racing is a quintessential component in the Alfa story and is given proper attention here. However, very little is said, and nothing shown, of the WW I-related production of engine compressors, ammunition, aircraft engines, even trains—and a criticism begins to form in the reviewer’s mind. Enthusiasts of Italian cars will of course recognize the name of author Tabucchi and hold it in the highest esteem. He has, incidentally, written three of this publisher’s 11 Alfa books, among which the perennial go-to book, with Stefano d’Amico, Alfa Romeo Production Cars 1910–1996. By comparison, this present book is rather, well, insubstantial—nothing wrong with that, there’s always a market for good starter texts, but it’s not what one would expect of Tabucchi’s pen. For instance, if one pictures as the target audience for this book the reader who is new to the marque, one would expect the book not to skip bits such as the full history of Alfa’s most iconic car of the modern era, the 105/115 Spider which ran in four series from 1966 to 1993 but of which only the first iteration, the Duetto, is described—and the remaining 27 years alluded to in a mere half a sentence. So, in terms of thoroughness, completeness, and balance the book is uneven.

Photographically the book is very appealing, especially in regard to the early days (most of the photos of modern cars are merely run of the mill press release and sales brochure material). Most of the older cars are shown in period photos, with a few exceptions of restored examples. There are relatively few photos of the inside of the factory or of design and assembly. The photos are supplemented by lots of technical and coachwork drawings (also a few cutaways), brochures, ads and paraphernalia such as badges etc.

There is a Bibliography but it is [a] quite brief and [b] not user friendly inasmuch as it lists only author name and book title (no year or publisher) and is not sorted in any discernible order. There is no Index which is only made worse by the absurdly superficial Table of Contents. All of which means this is a book for casual reading, not a serious reference source.

Every SpeedReaders review considers all aspects of bookmaking, from color to binding to proofreading, but we comment on such matters only when there are significant points—good or bad—to be made. Students of book design are directed to cast their eye on the verso (left) pages: each page (except the chapter openers) has on the front edge a red bar running from the bottom trim to a point about 35 mm below top trim. That topmost end point should be at the same height on all pages, especially since the red bar visually relates to a horizontal and a vertical red keyline above it. Instead it varies all over the place, with no discernible pattern, leaving only sloppiness as an explanation. There are other issues; you’ll find them once you start looking.