A year’s worth of racing on five continents. People and places you’ve probably not heard of. Cars you haven’t seen. A thousand photos. Race results. This yearbook has been around for 29 years now—about time we showcase one here!

Clear the decks—this mammoth book is 15″ tall! And it’s chock-full of useful info about what one might (mis)take for a niche subject. If you ever wondered how automakers and privateers work together, look no further.

The marque went racing within a year of its founding. Outside of Delage circles it is not fully appreciated just how competent their racing cars were. This book puts one of the three distinct periods of success under the microscope. And we mean microscope.

A year before this book came out, BMW i became the “official mobility partner” of the Coachella Valley Music and Arts Festival. Music and Arts?? Well, BMW wants to win hearts and minds—the future isn’t here yet, its shape not yet locked in, and it involves a whole lot more than dreaming up sleek cars.

A scrapbook is not a museum show or a historical treatise so calibrate your expectations accordingly. Neither the era nor the photographer need any explanation/justification: expect to discover cool things.

If you followed racing in the hairy 1960–80 era you could not have failed to notice this Swiss driver. This biography is deep in the best sense. The reason it was written is to commemorate the saddest of occasions.

If you travel in certain circles you know this name. Even with a couple hundred well-captioned photos of cars and places you’ll recognize, you’ll wish you spoke German and hear him tell his story in his own voice. 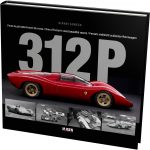 Enzo Ferrari, that arch proponent of “function over form,” is said to have made one exception: the 312 P. It may only be an anecdote but what facts are known about this car are in this book, along with fantastic period photos.