Vulcan Test Pilot: My Experiences in the Cockpit of a Cold War Icon 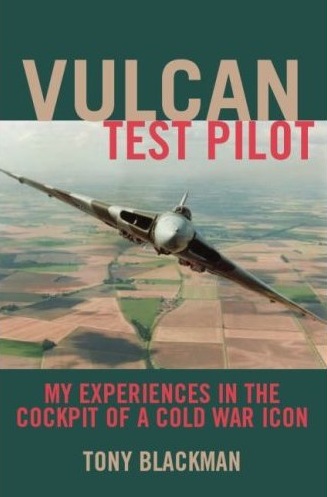 Although there have been many books written about the Vulcan bomber program, this is the first to be authored by one of the project’s test pilots. Blackman, who logged over 1300 hours flying 105 of the 136 copies built, brings to the reader a first-hand commentary of the hard work involved in the flight testing of a large and unique aircraft. The book’s publication in 2007 coincided with the commemoration of the 25th anniversary of the Falklands conflict in which the Vulcan had seen its first combat action—only to be withdrawn from service a little later—and the return to the skies of the only remaining airworthy Vulcan.

Blackman’s first captaincy of a Vulcan bomber was as a RAF test pilot at Boscombe Down (the British equivalent of the Edwards Air Force Base flight test facility in the US). He traces the history of the aircraft’s evolution which stemmed from a 1946 Ministry of Defense operational requirement to produce a jet-propelled bomber. The aircraft had to be capable of carrying a British-designed and -built nuclear weapon, with a range of over 3,000 nautical miles at 550 mph and to cruise at an altitude of 50,000 feet. It was a very ambitious and demanding requirement but this was the sort of promise offered by the potential of the jet engine pioneered by Air Commodore Frank Whittle. Blackman left the RAF in September 1956 and joined the aircraft manufacturer A.V. Roe & Co. as a Vulcan test pilot four years after the prototype’s first flight. He rightly gives much credit to Roland Falk, the Avro chief test pilot for the dramatic first public Vulcan demonstration at the September 1952 Farnborough air show. He and Jim Harrison’s pioneer work in flying the 1/3 scale model delta wing aircraft, known as Avro 707s, that were flown from 1949 onwards proved the aerodynamic performance and handling characteristics of this unproven configuration.

The book details much of the mundane test flying (and occasional excitements) required to establish the Vulcan’s safe performance and handling limits so that the average RAF crew could operate the aircraft competently. The two production Vulcan versions, Mk 1 and Mk 2 had differences in wing shape, particularly with the leading edge, a 15-ft increase in wingspan, a new AC electrical system, and more powerful Olympus turbojet engines. These were the antecedents of the Concorde’s Olympus 593 engines. The Vulcan’s main weapon was the free-fall nuclear bomb but some aircraft were fitted with the rocket-propelled Blue Steel stand-off nuclear weapon that could be launched 100 miles from the target. There was also a project to carry the Douglas Skybolt air-launched ballistic missile but it was cancelled.

One significant aspect of this book is a most interesting section devoted to incidents and accidents, including an analysis of the cause. Many of the accidents were due to pilot error but three were caused by electrical failure, one of them demonstrating the inability of the batteries to supply sufficient power after a main busbar failure. Surprisingly there is no discussion in this book of the lack of ejector seats for the Vulcan’s rear crew members. This was also the case with the other two V bombers, the Valiant and Victor. This lack of crew protection created a huge controversy that was never resolved throughout the life of all three aircraft. Martin Baker, who built most of the ejector seats for the RAF did offer the RAF proposals for rear crew ejector seats in all three V bombers but, disgracefully, the British Treasury, the final arbiter of funding for all government projects, turned down the idea because of excessive costs.

Mention is made of the one remaining, now fully restored Vulcan (XH558, which Blackman was the first person to fly, in 1960) that is still flying in the UK, thanks to huge public interest in this iconic aircraft.

The photographs, some in color, are scattered throughout the text and show interesting details of this delta wing project. Many of them have not been published before. Written in mainly non-technical terms the book does include a useful glossary of aeronautical terms and the ubiquitous acronyms. Appended are a 1947–2007 time chart, an accident report (VX784) including reproductions of a memo, reproductions of an actual Flight Test Report and a Progress Report, a production history, a list of development aircraft with description of item/s tested, Vulcan operators (military and other), and specs.

A softcover edition of the book appeared in 2009 (ISBN-13: 978-1906502300). It is identical except for different cover art and different photos as well as minor text changes in Ch. 9, the one that describes the restored Vulcan which had not yet been airworthy at the time of the 2007 hardcover edition.

Tony Blackman has provided an excellent glimpse into the world of test flying and he offers many interesting comments and facts about one of the UK’s most successful military aircraft. An excellent addition to any afficianado’s bookshelf.

Copyright 2010, Michael Jolley (speedreaders.info)
(The reviewer started his professional life in aviation as an engineering student at de Havilland before going into the RAF—where he would likely have been on Vulcans if he had stayed on—and then joining Rolls-Royce Ltd. as Director of Advertising and then VP Public Affairs.)