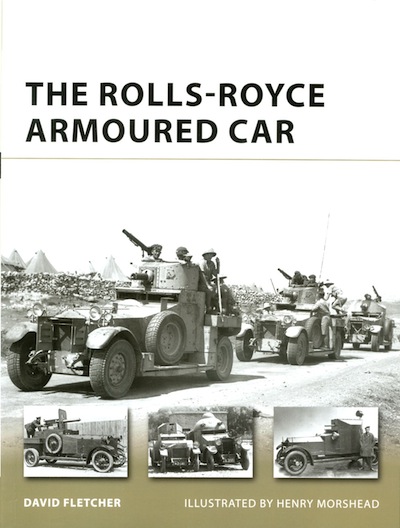 Rolls-Royce passenger cars were justly famous for not only their lavish appointments and refined road manners but their rugged build quality. The last factor made them obviously suited for war service but it was their well-heeled owners who had the means and the patriotic leanings to volunteer their private cars for militare service. “A Rolls in the desert is above rubies” were Lawrence of Arabia’s famous words.

David Fletcher is no stranger to this subject. As author of War Cars (HMSO, 1997), and historian at the Tank Museum, Bovingdon, he has 40 years experience in researching military vehicles. In this short volume he packs as big a punch as the cars themselves, encompassing all the variants in design and the campaigns where they were used. It is an astonishing story in so many ways. And with the centenary of the 1914–18 war looming, this booklet makes a well-timed appearance,.

The story starts with a War Office group being impressed with the Rolls-Royce 3-cylinder 15 hp at a 1905 auto show. Too small and too costly, it did at least give the military something to think about. But in 1914 it was a private effort by Commander C.R. Samson to rig armor cladding to a Silver Ghost in Belgium that set the ball rolling towards properly designed armor for Rolls-Royce chassis. Control was in the hands of the Royal Naval Air Service in the Royal Navy. A group of 60 cars, 18 of them to be Rolls-Royces, was planned with rather basic armor offering little protection. Fletcher shows how the British “penchant for improvisation” overcame the chaotic organization behind the plans.

By November 1914 a turret design had been developed, lightweight but effective against armor-piercing rounds. Fletcher outlines the steady development of the “patterns” adopted for these cars in various theaters of war and these are illustrated in colored drawings by Morshead. What is so fascinating is the new range of photographs included, such as Silver Ghosts fitted with double rims both front and rear, an armored car built by coachbuilder Barker, Indian domed-turret versions, and finally the modernized cars used into the Second World War in the Middle East, Southern Africa, and even China. As an overview of Rolls-Royce armored cars this is thoroughly recommended.