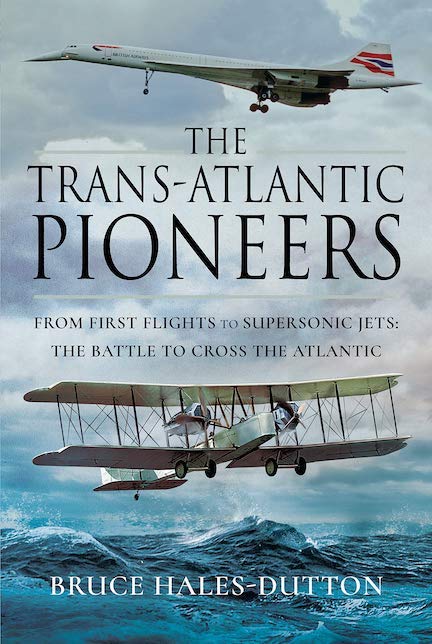 “All brought their own special qualities and talents to the proposition that crossing the Atlantic by air was possible and practical. In their different ways they were trans-Atlantic pioneers. Their legacy is the daily flow across the North Atlantic of up to 3,000 aircraft flying on more than 400 different routes.”

Big anniversaries usually beget a host of commemorative books. The year this book was published, 2019, marks the centenary of the first nonstop transatlantic flight, by UK aviators Alcock and Brown—and no one seemed to be excited that in a mere 100 years we went from rickety biplanes and minimal navigational tools to routine supersonic air transport and satellite-based navigation with pinpoint accuracy.

Well, continent-hopping, in comfort and safety and not to forget relatively small cost is a big deal, and Hales-Dutton’s new book is a perfectly good way of highlighting the key milestones. He has written about aviation for decades and, specifically, worked as a press officer in the UK government agency responsible for that country’s aviation industry. And, as a member of the Royal Aeronautical Society, he would hardly get away with offering a weak book. (He has also written several motorsports titles.)

The rate of progress he charts here is most remarkable for the fact that it is so unevenly spaced: in the 19th century, 50 years lay between the first attempt to cross the Atlantic by air (balloon, 1859) and the second (dirigible, 1910)—both failed—but in the 20th we went in 50 years from first commercial Zeppelin crossing (1928) to fastest-ever jet airliner crossing (1979, Concorde, 2:59). Wondrous times.

To state the obvious, the book does not concern itself with who was the first to fly, or any antecedents of powered, repeatable, intentional flight but with the origins of that one great test of technical and human endurance of the day—nonstop flight across the featureless Atlantic with its daunting climatological challenges. A 6-page timeline presents many of the factors the book will explore in detail, and it picks up the story proper with the towering figure of newspaper baron Alfred Harmsworth, later first Viscount Northcliffe who dangled many thousands of Pounds (millions in today’s money) between 1910 and 1930 in front of the aviators’ goggles.

The chapter titles are rather vague (“A Bit Ticklish”, “Have You Flown Far?”) but there is a quite useful Index so if you know what names/events to look for, begin there. While the story is told in chronological order, not everything or everyone that played a role in it is presented here. Photos are few and they are, in that entirely antiquated fashion, bound into one 8-page b/w section in the center of the book. There are, on the other hand, quite a lot of sidebars covering aircraft specifics and other relevant bits, and there is a nice assortment of excerpts from contemporary sources (along with a Bibliography).

It’s a very readable, sweeping, enjoyable book. That it is not nearly as sexy as the subject deserves is surely not its fault.