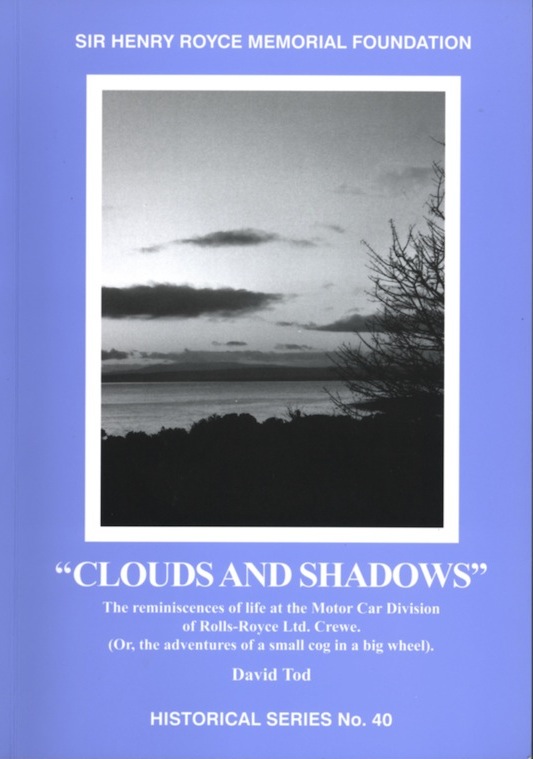 The subtitle says it all: “The reminiscences of life at the Motor Car Division of Rolls-Royce Ltd. Crewe—(Or, the adventures of a small cog in a big wheel)”

When reading the story of an engineer’s working life there is a strong possibility that one’s eyes will glaze over as the pages are turned ever more quickly in the hope of a few words less dry or a photograph more interesting. Witty quips may be included, but they will be of the “you had to have been there” variety. Something akin to the best man’s speech at a wedding, when he turns away from the microphone to rib the bridegroom about some past misdemeanors they shared in high school. Embarrassing fun for them, but the guests are left reaching for the champagne.

Not so with David Tod’s tale of his days at Rolls-Royce’s Crewe plant. Covering the period 1957–1968, he tells of being the first-ever Commercial Apprentice, a junior employee, and finally a fully-fledged manager. The book title is misleading as this story is much more than a few facts about those the iconic motorcars—Rolls-Royce and Bentley—made there. This sort of fine detail has not heretofore been recorded in print.

Tod writes with a gentle flair for making even the mundane particulars of Rolls-Royce factory lore a fascinating read. His memory for facts, incidences, and names seems without bounds. The personalities of his friends, co-workers, and bosses are fleshed out for us with just the right amount of detail to enable the reader to “know” the characters. Likewise, the products of Crewe on which he worked are explained; cars, of course, but also aero engines, railway power units, marine motors, and the machines they powered.

In addition we are treated to a fly-on-the-wall view of the various departments in which he served time as an apprentice. The secret to Tod’s writing prowess lies in the clue given by his having gained a Commercial Apprenticeship. Not only engineering tasks were to be covered, but just about all aspects of the Crewe Works, a path which led to him being a copywriter in the Publicity Department, and eventually into Sales.

So often historic accounts and reminiscences leave out the humor, sadness, temperament, and character of the people involved, but not in this case. Problems overcome, canteen banter, and practical jokes are recalled. All against the backdrop of the serious business of making the best engineering components in the world, and the ups and downs of Tod’s family life.

In the days before films needed explosions, broken plate-glass windows, and demolished cars, Tod’s story could well have graced the silver screen: best made at England’s Ealing Studios with a young Alec Guinness in the starring role!

Highly recommended to all Rolls-Royce enthusiasts, and all who like a good story.

Posted Under: Automobiles, Biography/ Autobiography, British | Author: Other | No comments yet

The World of Vanity Fair »
« Alfa Romeo: A Century of Innovation