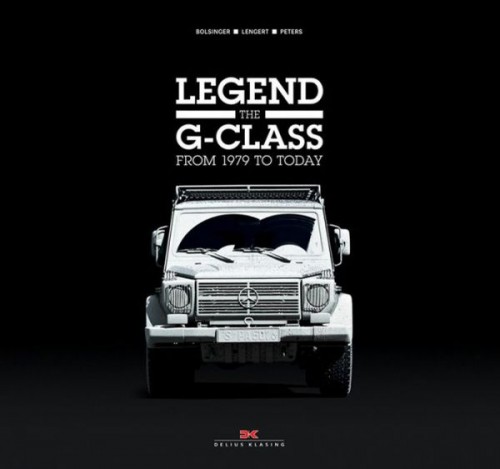 “It is the encounter with a machine which is almost human, unique and well-behaved, holding out the promise of a loyalty which will not shrink back from any scree slope. A virtue that is now rare. The G is a car of chivalry, ready to help at all times, to assist the weak.”

Ok, even if this gushing assessment is dialed back a few notches, it’s still way above what most people would say about most of their cars. The Pope had one, a vast number of militaries run them, and a surprisingly large number of well-heeled civilians apparently cannot live without it. All hype aside, a G-Wagen really is an unusual beast, and at prices on par with its S-Class stablemate—without the luxury and drivability—it had better be.

Created some 30 years ago as a rugged off-roader that really can go pretty much anywhere (80% grades, tilted 28.4º, and with a 60-cm fording depth—specs that only a UNIMOG can best) a Geländewagen is equally competent as a daily driver/grocery getter/highway hauler—although sort of wasted in those menial roles. Unlike a Hummer or even a Range Rover, it has become a cult object. This Swiss Army knife of a vehicle is not one you buy by accident but with intent, even if that intent is only to say to the world that “you can.”

This book is about inspiration and aspiration, not historical minutia. With books like this, and of which this publisher has several in its line-up, one is never sure at whose behest they are written or for what purpose. They clearly are not aimed at the reader who seeks a conventional book brimming with specs and stats and written in a clinically detached way by a journalist beholden to no one. These books are pro whatever their subject is, so pro that one is always tempted to think the manufacturer is bankrolling them as a marketing ploy. There is never a fly in the ointment, never a harsh word. Still . . . 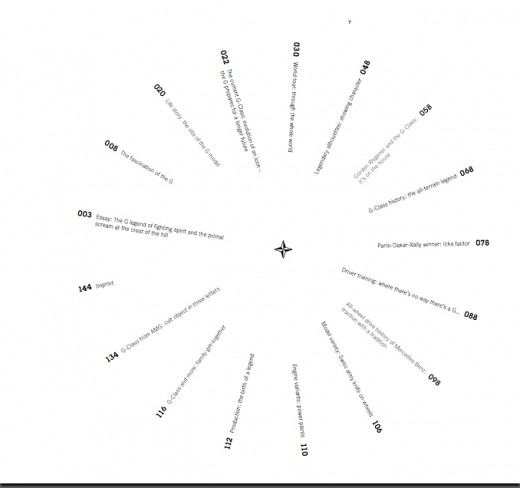 Still, books like this have their place. Unabashed enthusiasm on the part of the author/s does not, intrinsically, spell corruption or irrelevance—you just have to calibrate your filter. This book, for instance, opens with an essay about a “Matterhorn of a car” [at 14,692 ft one of the highest peaks in the Alps and one of the last to be conquered] and extols the G’s heirloom potential, postulating that the only acceptable reason for ever parting with one is to make room for a new one (and even then you should really keep the old one unless the recipient is truly worthy)—but then backs that up on the following pages with the incontrovertible reality of one particular G that, privately owned, has been to 200 countries and is on the way to racking up a record-setting 870,000 kilometers before being retired, with honors, to the M-B Museum. If that doesn’t make the point that a G is special, what is?? If that doesn’t make the point that this is a car that’ll take care of you, what does??

If you’ve seen a G, all boxy and upright with clean and simple lines, you’ll either be moved to poetry by its uncompromising blending of form and function, or you’ll be bored. The book cites the VW Beetle, the Porsche 911, and another Mercedes, the “Stroke 8” (aka the W114/115 series) as similar exponents of totally committed design with basic shapes and proportions and strong lines that, because of this stylistic clarity, have become timeless classics. An interview with M-B chief designer Gorden Wagoner sheds light on why the outward form of the G has seen, or needed, so few changes over the decades. 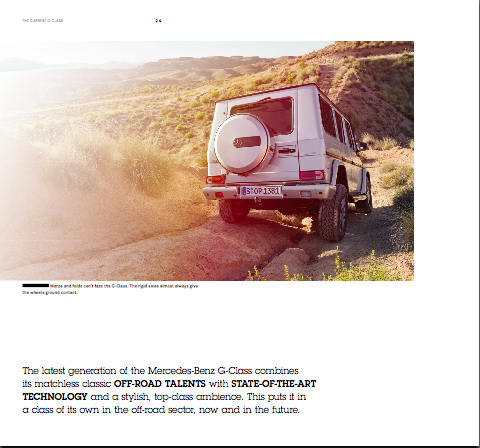 Elsewhere, a discussion of the specially modified 1983 Dakar Rally-winning G is followed by detailed descriptions of the stock version’s offroad capabilities including a ride-along with one of M-B’s testers, reminding the reader that all-wheel drive began at Mercedes a long, long time ago. The four basic body styles and the M-Class, GL and GLK derivatives, and the AMG model, are presented, with specs and technical bits kept to a supporting role and mostly employed in the explanations of the G’s body-on-frame construction, solid-axle suspension and the three fully locking differentials, a rather unusual feature.

Throughout, the book is adorned with images by one of Germany’s very well-known commercial photographers, Markus Bolsinger. Even more so than the text they are a departure from the conventional car book. They are splashy, “moody” in a good sense, more akin to advertising photography. They are also big, and the whole book is crisply designed and has excellent presentation.