The Quest for Speed 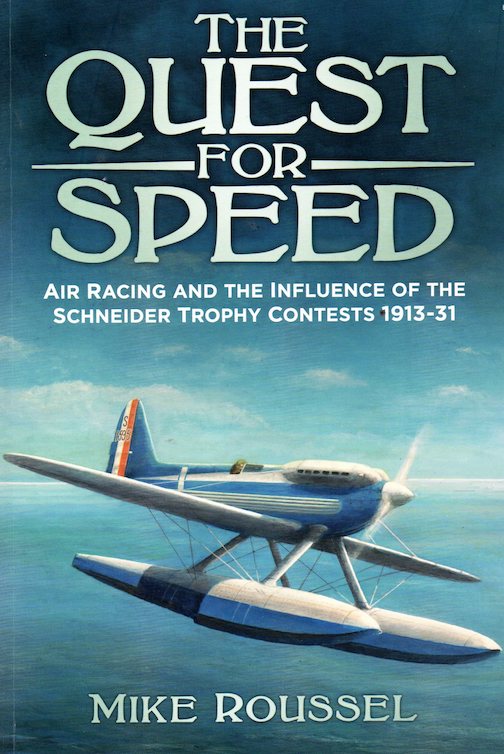 “The Schneider Trophy contests were not without human cost. Over the eighteen years of the contest, thirteen pilots including one French, two American, three British, and seven Italian died in developing and testing aircraft, although no one died during the races.”

This is a competent, thorough look at the theory and practice of air racing—except, there’s that subtitle. It doesn’t do the book any favors and if that is what drew you to it, move right along because you will not find a specific answer to the question of how a contest for seaplanes, which have different aerodynamic parameters and flight behaviors from landplanes (drag-inducing floats, wing shapes, spotting a landing etc.) affected the sport of air racing.

In all other regards, the book, small as it is, packs a big punch to make for a solid introduction to the topic. There is no shortage of books old and recent about air racing or the Schneider Trophy and one would be hard-pressed to say that Roussel’s book contains new facts or draws new conclusions. If you’re new to the subject, this book offers quite a multi-faceted picture of the different racing series in general and the flying apparatus in particular. If you’re an old hand you will find the occasional nit to pick, the most annoying one probably the author’s statement that it was the oil-spewing radial engines that prompted pilots to wear “white silk scarves” so as to have something handy to clean their goggles. (The Internet is full of such nonsense, flogged by people who obviously never tried it.) Roussel has written about prop aircraft before and has friends (who even wrote Part 4 of this book to commemorate one of their archivists) at the Solent Sky Aviation Museum that has such deep connections to the Schneider story so it is odd that this old chestnut passed muster.

The book begins with a brief rundown of the origins of flight and then shifts to aero engines. This is all presented in the form of short paragraphs, each with their own head—which are not listed in the Table of Contents. Why does this matter? Because there is a lot of useful information here that can’t be easily found the next time around when you just want to quickly look something up (there is also no Index). US readers, for instance, would know of the Pulitzer Air Races, and perhaps even know that two Pulitzer aircraft pocketed the two US wins at the Schneider contest but they’d have no way of knowing if Roussel covers that because his Ch. 2 “Achievements in Aviation Prizes” only mentions UK and Continental events although there are, here and elsewhere, plenty of US references.

The descriptions are quite brief because their main purpose here is to provide a framework for the main topic of how racing—like war, a crucible for sharpening one’s priorities—improves the breed. Or does it? The premise is posed, not least specifically in regard to French industrialist Jacques Schneider (“He was also interested in how much effect the cash prizes . . . were having on the development of aircraft.”) but never resolved. Even the one chapter that one would expect to contain the answer/s (18, “The Legacy of the Schneider Trophy Contests” from which the opening quote is pulled) remains inconclusive, certainly in regard to if or to what extend any prize money was plowed back into development (as opposed to political or technical drivers that would have brought about the same results on their own; consider that it was the British government that made it possibly for the RAF High Speed Flight to finally claim the prize in perpetuity!)—and is only 2 pages long anyway.

The bulk of the book is devoted to the individual Schneider contests in chronological order 1913–31 (maps are provided), their organization, the pilots, and their aircraft. The entire Part 4 is devoted to various Supermarine machines including the Spitfire in whose case there is a clear connection to the Schneider winners (this section is actually particularly noteworthy inasmuch as it lays out how little the production aircraft had in common with the racing machines—which would be an interesting thread to explore in view of the book’s original premise). Photographically the book is quite strong and the many b/w photos are quite well reproduced but small. A short color section presents brochures, fine art, and several shots of restored machines.

So, it’s a useful book, and certainly cheap enough not to cause frustration on that score, but by no means should be your only one on the subject.

The Quest for Speed:

The Argentine Temporada Motor Races 1950 to 1960 »
« DKW: The Complete History of a World Marque