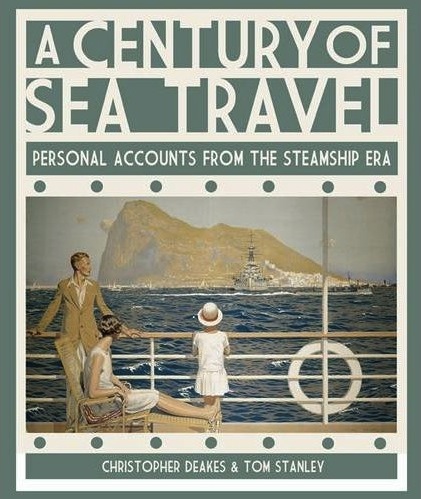 “It is another point in favour of American traveling that there is not the hard and fast line between the classes that exists on British vessels. In theory, the Americans are all one class.”

Observations such as this—about fellow passengers, ships and their crews, food, conditions on board, the excitement of travel, the apprehension of what fate has in store on the other end of the voyage, and a thousand other things—are gathered here to paint a vivid picture of steamship travel from the 1840s to about the 1950s.

Be it the Lord of the Realm in his stateroom or the emigrant in steerage or the soldier on a troop ship, the simple fact that there was time to do nothing in particular prompted many to put pen to paper and reflect upon their circumstances. Whether it’s the heaving of a ship on sea or the staccato of railcar wheels or the hypnotic drone of an airplane engine, the very process of traveling tends to shift the mind into a different gear. If you think about it, the blank postcards you find even today on an intercontinental jetliner seem positively quaint—but you’ll probably grab one and scribble a note to someone anyway.

The variety of writers and writings presented here gives a multi-faceted and vastly engaging view of one’s fellow man. Some was obviously expected to be read—letters and memos etc.—but others—diaries etc.—surely not. The authors of the book string these snippets together and embed them into an overall narrative that follows the order in which a voyage would normally unfold: departure, the ship itself, accommodations, being at sea, fellow passengers (with special consideration for shipboard romances), food/entertainment, ports of call, hazards, the crew, and, if all went well, arrival. A separate chapter deals with troop ships. 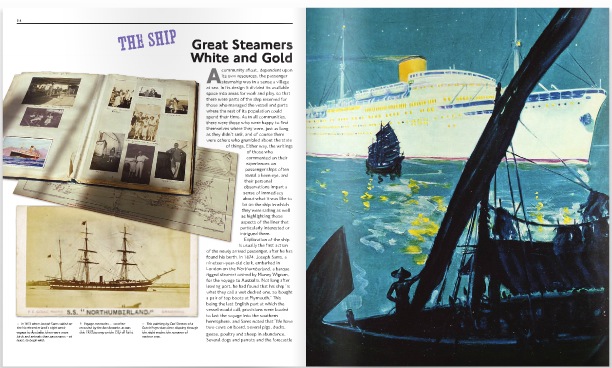 The authors call their book a kaleidoscope and that is a perfect description: A complex, colorful, and shifting pattern or scene. Given the source and intended purpose of the material, its charm lies in being just what it is—subjective observations with no ambition of offering any sort of exhaustive or even insightful treatment of a topic. It is to the authors’ credit that they are able to flesh out these slice-of-life snapshots with background and context, often specifically related to the excerpts they are using, and thus keep this approach from devolving into random noise. While the sheer quantity and rapidity of the many quotes may for some set too quick a pace, an overarching and engagingly told story is clearly in place.

From snide gossip to Deep Thought, from a child afraid of new surroundings to an ill passenger hoping that the sea air will restore health, from cleaning up at roulette to hurling one’s guts out—pretty much the entirety of human experience is on display here, and no one with any sort of imagination could possibly find this book boring!

Imagination is obviously something Messrs Deakes and Stanley possess in spades. The former used to be a shipping agent and collected shipping postcards (he also wrote A Postcard History of the Passenger Liner, ISBN 978-1848321519, 2005/2012) and the latter took his postcard-collecting to a higher level by becoming a dealer specializing in maritime subjects; many of his items are used in this book. The scope of the illustrations is as wide-ranging as the quotes themselves: postcards, travel posters, invoices, promotional brochures, fine art, photos, maps, luggage labels, health inspection certificates, itineraries. 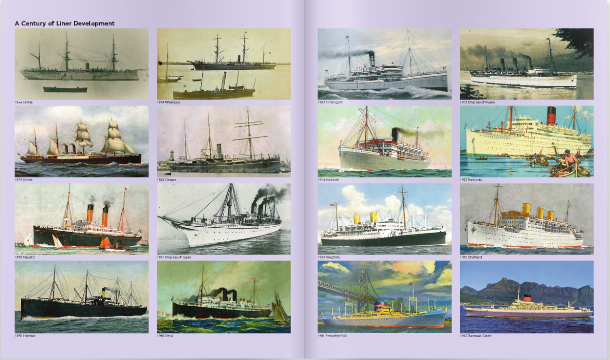 Imagination is also evident in book designer Roger Daniel’s work, be it the seafoam green covers or the faded-ink passport-stamp look of the chapter titles.

This is a lovely book and, at first read, you’ll probably not be able to resist the temptation to keep turning pages. But, like any smorgasbord, it’s best to pace yourself and take time to “digest” the riches in quiet moments here and there.

Enzo Ferrari – Power, Politics, and the Making of an Automotive Empire »
« Superman, The High-Flying History of America’s Most Enduring Hero