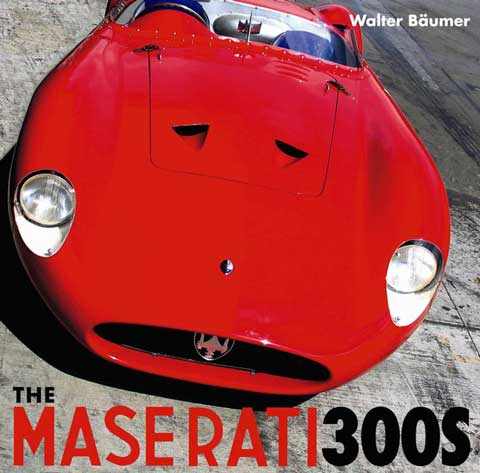 Hard to imagine that there’s a living to be made being a full-time Maserati historian but that’s just what German photographer (mostly fashion) and car enthusiast Walter Bäumer decided to do in 2003. Incidentally, he also is the editor of the German Maserati Club’s excellent magazine Der Dreizack (The Trident).

Supremely beautiful and possibly the best all around sport racing car of the 1950s—if the votes of the likes of a Moss, Fangio, or Behra matter—the fabled Vittorio Bellantrani-engineered Maserati 300S of which only 26 copies were built between1955–1959 caught Bäumer’s eye in the 1990s when in an idle moment he picked up a long-forgotten Maserati book in his library.

Struck by how “the fluctuating fortunes of the 300S gave the car a special melancholic touch,” he set out to record as complete a history as possible that attempts to answer “many of the questions that have arisen during the last fifty years.” He does not disclose just how he did that, i.e. how and where and with whom he conducted his research, but judging by the Bibliography and the list of names in the Acknowledgments all the usual suspects were duly consulted. Moreover, especially on the photographic end, there is quite a bit of totally new, never before published material both among the period and the modern-day photography. And there are even such delectables as several pages of full-size reproductions of a now rare technical description given by the factory to the original owners.This is the first book devoted to a complete history of just this one model and, given its thoroughness, is likely to remain the only one for a long time. Not only is this book substantial in terms of contents but also in terms of paper, production, and sheer weight (almost 7 lbs). Bäumer’s background in art direction is also evident in the appealing layout, done in conjunction with Ben Gibbs, head of a London-based design, branding, and communications company that also designed Dalton Watson’s Spring 2010 coffee table book The King of Cool – A Tribute to Steve McQueen. By page 10 the latest you realize that this is not a mere compendium of facts and stats and trivia: on two full, facing pages, against an oh so red background, are shown a front and rear view of a sexy 300S motor by itself. (There are also full-page shots of drum brakes and gearboxes etc. to keep those people who get a kick out of machining up at night.)

Following a survey of the basic technical attributes, a description of the three different 300S body versions, and a photographic tour of where on a car to find chassis and engine numbers the book portrays the Maserati firm’s place in the world in the 1950s and the various Italian racing teams that ran Maseratis after the firm closed its in-house race department in 1958. Particulars of the World Sportscar Championship of those years and racing in the Americas lead to a discussion of Maserati’s sales operations in the US and advertising in general. The following 220 pages examine each of the 26 chassis (of which four were renumbered) individually in exacting detail, from build sheet details to competition history or private use to ownership history and ending with a table enumerating race history by date, driver/s, starting number, and finish.

While there is no shortage of text, pride of place goes to the photos, many of which are large—a very few possibly too large for their own good as they are becoming fuzzy (unless it was just poor-quality source material to begin with). As applicable, period photos are augmented by modern ones. Captions are brief but specific and state the source. Race posters, magazine covers, sales brochures etc. add layers of detail.

Closing chapters present the dozen mystery cars that appeared in races but cannot be definitively identified (due to shoddy record-keeping, ambiguous sales history or the like), the 350S successor model, and mini bios of the “name” professional drivers. The Index is divided into cars and people. Whatever revision this book may need or receive in future will likely concentrate on the mystery cars which meanwhile will make for endless discussion.

While unrelated to the book, it is worth the few words to point out that Bäumer’s uncle was a Mercedes-Benz GP driver in 1937–39 who won the (shortened) 1940 Mille Miglia and was bizarrely killed in 1941 falling out of his own moving car.