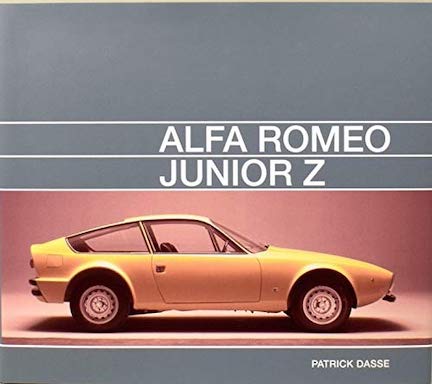 “Alfa Romeo saw the possibility of releasing another model onto the market based on the Tipo 105. It was intended to be a coupe, with a design that reflected the spirit of the times, but which strongly deviated from the coupe in the current range designed by Bertone.”

(English / German) As this is almost exclusively a book of photos there’s not a whole lot to “describe,” especially since we do not do book reports that rehash everything that’s in a book. There’s not even much insightful commentary to render about the photos—they’re not artsy in the remotest way but strictly documentary and archival, and most published here for the first time, wherein lies the whole purpose of author/publisher Patrick Dasse’s series of books about all of the variants of Alfa Romeo’s Type 105. If you have one those cars, especially if you’re a younger person (meaning a person younger than the car), these books are as close as you’ll get to time-traveling back to the days when your model was built. You’ll see the studios, the motor show stands, the assembly halls, some of the principals and, in this case, some behind the scenes views of Italian coachbuilder Zagato.

Lessons in Seeing, part 1: same car, same position (compare the position of the Alfa emblem on the wheel hubs) but slightly different angle, and, duh, the lift gate is open in one shot.

Lessons in Seeing, part 2: as above, right? Not so fast—someone stuck a headrest on the front seats in one shot!

Among all the 105-series models, the Junior Z of 1970–1975 is the design that deviates most from anything resembling a formulaic approach to the mass-produced car, which was the whole point of Alfa Romeo designing a mechanical package that could be shared across the platform but clothed in many different ways.

This photo doesn’t have a caption but you can probably figure out how it works. Unless you have a car like this, you have no idea what a pain those plexiglas covers are to clean on the inside. But that trademark Alfa shield on the front grille is genius: your eyes “see” it even though it is not at all there.

This one does have a caption but only the German one has the necessary clue. Shown is “the switch that electrically opened the boot a fraction, located on the center console.” So which one is it?? If the English version said “rocker switch” (Kippschalter in German) instead of just “switch” you’d know it has to be the top right one.

If you see a bit of Volvo 2000 GTZ or Lancia Flavia Supersport in the Junior Z it’s because they were all designed by the same man, Ercole Spada. That they have such a recognizable design DNA is not because he was a one-trick pony but because the short tail (one look at the cover and you see why) whose merits he sung so loudly that he proudly owned the moniker “Mister Short Tail” was the era’s most comprehensive answer to performance and handling questions.

Hardly a glamor shot but seeing what goes where will sure come in handy when you have to tear into your car one day.

Details, details, down to the shape of the keys.

Presented in photo-friendly landscape format the book covers the prototype and then the two production models, the Tipo 105.93 Junior Z and Tipo 115.24 1600 Junior Z. Aside from the occasional photo caption, narrative text is confined to introductory remarks. There are three tables of technical specs and production figures.

If you intend to acquire other books in this series do know that this particular one is really the lightest on text (which, just to say it again, is not its intent in the first place), and, in fact, the shortest of the seven and thus also cheapest.