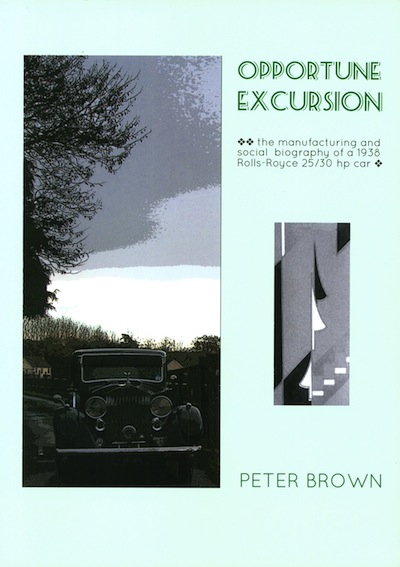 Just occasionally a book comes along in the saturated world of motoring books, that stands out as really unusual and fresh in its approach. This is one of those books.

As the subtitle indicates, this book is primarily the history of one particular Rolls-Royce, namely the writer’s own 25/30 hp, chassis no. GZR1. Given its price and the stature of its maker it should be no surprise that these cars were bought new by well-heeled and often important and certainly interesting persons. It is entirely common for most subsequent owners to go to extraordinary lengths to seek to acquire every morsel pertaining to the history of their car, or research it from scratch and then faithfully add to the paper trail for the benefit of a future owner, who, tellingly, in Rolls-Royce/Bentley parlance is considered a custodian rather than an owner. This very notion of being only a temporary caretaker instills an uncommonly keen awareness of the arc of history in those fortunate, or foolhardy, enough to have one of these remarkable cars in their lives.

There have been several books, even fictional ones, devoted to just one car, and several by owners about their own car. Perhaps Neville Minchin started it with The Silver Lady in 1961 about Silver Ghost chassis 2208. Robert A. Davies, in his 1981 The Story of the Black Beauty, covered his Phantom II #127RY. In 1985 John C. Douglas-Pennant wrote a fine booklet on his 25/30, chassis GTL22: The Story of a Car. Another notable volume was Graham Dukes’ 2007 book about Silver Ghost #114AU, Ghost Story, The Social History of a Remarkable Car and its Unusual Owners. In 1996 Bryan W. Inder issued An Australian Rolls-Royce about his Ghost #12HG. Most recently Margaret Gillings in Australia has published Mona’s Tale, the story of Phantom II #147GN. Most Rolls-Royces have interesting histories, once you start to delve, and all these books and booklets have one thing in common, solid and enthusiastic research.

While many of the above are primarily of interest to the owner, or owners of similar models, or the arch Rolls-Royce enthusiast, Peter Brown’s book casts his net wide enough to offer insights to anyone with an interest in the British motor industry. Although not in the book, the following example illustrates a practical application: Lucas, the maker of electrical systems, is often the butt of jokes about the quality of their components, and the vast majority of owners of cars that use them (not only British ones) will happily, well, unhappily, sing that tune. But Rolls-Royce/Bentley used them too. For decades. And they don’t have these problems. Lesson? Lucas built to the price point the car maker was prepared to pay: pay more, get more. Flimsy electrics may burn your MG to the ground but probably not your Bentley.

Brown wanted to take a wider look at the car and its period, and to know what the background was to the myriad parts that made the whole. Not only the coachwork and the social history, but also the proprietary parts that increasingly were used by Rolls-Royce as they withdrew from insisting on making every single component, down to the cotter pins, in-house. So Brown delved further and the result is a series of histories of the outside companies and their products that Rolls-Royce turned to—Marles for steering, the steel suppliers, the castings makers, the electrical bits, locks, latches, and number plates. And much more. The author believes that “much of the text is entirely unkonw even to the most expert conoscenti” and that 75% of the illustrations have not previously appeared in print.

It is all cleverly woven together and even includes apposite quotes from the Bard, the regicide John Milton, and others. Eccentric? No! Entertaining? Yes! Illuminating? Definitely!

A lot is crammed into these 192 pages—thus the type size is small. But it is an elegant production (even the font names are given, as books of yore did) with a delightful range of period and modern illustrations. Privately published and in small numbers, the book is of necessity not cheap.