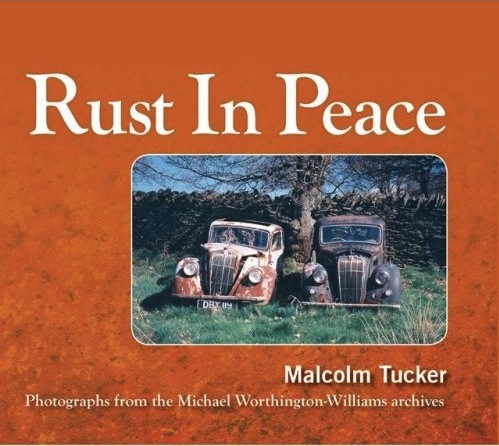 The proverbial tooth of time spares nothing and no one. As the title implies, this book features automobiles in various states of decay and disintegration. While this may appear an odd, or morbid, topic for a coffee table book, it is the inevitable fate of most cars.

The photos, mostly in color, come from all over the world but the majority were taken at scrap yards in the British Isles. The photos come from the vast files of material submitted to motoring historian Mike Worthington-Williams who has been a regular contributor on early-vehicle subjects to many magazines for over 50 years. They have been taken over the course of years and decades by anyone who happened to stumble across something unusual. The photos’ original purpose was mainly to simply document the whereabouts of particular cars or to seek help in identifying the barely recognizable remains by having Mike Worthington-Williams publish the photos in his various columns.

The photos are extensively captioned with much information about the cars, which range from the earliest of veterans to about the 1960s. The scope of the information is in fact quite astounding and it is most educational to see the cars through the commentator’s eyes. Just as some people can tell a tune from hearing only a few notes, so the forensic automobile expert can deduce a car’s make, model year, or specific features from recognizing a mere scrap of a tell-tale piece of metal and thus unravel layers of detail that are otherwise not at all apparent.

The book is divided into “themes” and shows passenger cars of all stripes as well as a some commercial and agriculture vehicles. One section is entitled “Aristocrats”—the obvious category for high-end marques like Rolls-Royce and Bentley—and it is truly sad to see that no matter their “station in life,” the end is sometimes inglorious. On the other hand, the photos prove they’re not scrap yet! The hulks rest and rust in peace, perhaps one day to be restored to their former glory.

Looking at the photos reminds the reader that traditional scrap yards where rusting hulks might sit forgotten and undisturbed for decades are themselves becoming extinct. Nowadays in some lands, vehicles are crushed inside of six weeks of being scrapped. The book, then, captures a moment in time that would otherwise have faded into oblivion. An unusual book, to be sure, but offer entertaining hours spent poring over its contents and letting the mind wander.

The book is in landscape format, many of the photos are full-page, reproduced crisp enough to show every layer of dust and printed on high-quality paper. An index lists the marques shown.

As this review is being written/posted, the author is about to finish work on a new, related book for the same publisher. Its working title is Fallen Ladies, a take on the Flying Lady hood ornament on Rolls-Royces, and will feature only examples of that marque (and its former stablemate Bentley) that have fallen on hard times.

The Man Who Supercharged Bond: The Extraordinary Story of Charles Amherst Villiers »
« Bentley Beauty, The Art of the Coachbuilder on the Derby Bentley 1933–1940