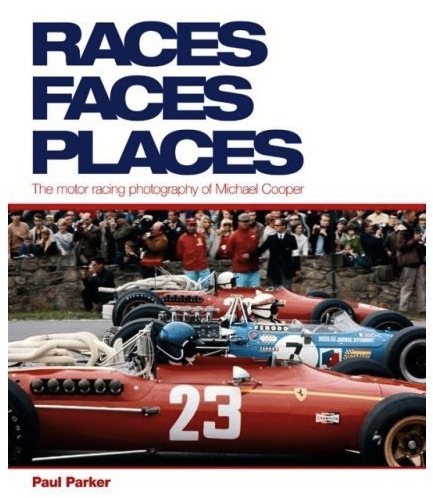 This is the sort of book you pick up in an idle moment—and hours later wonder where the day has gone. Both in terms of photographic technique and storytelling there is much, much to discover here.

When Cooper (1938-2005) worked on his 2000 book Sixties Motor Racing (be prepared to parts with large sums of money!) he recruited Parker to write the text. Parker now pays tribute with this book to one of the great names in British motor racing photography. The selection presented here is culled, with the help of Cooper’s wife Liz who also wrote the introduction, from his archive of negatives which has yielded quite a few of the sort of photos that may not have made final cut in Cooper’s day but now gives us something to look at we haven’t seen before. Moreover, some of the color work here is shown for the first time. There was never much of it anyway as Cooper preferred to work in black and white.

The photos are presented in more or less chronological order and stem from the 1950s to the 1970s when Cooper turned his back on the rampant commercialization and politicking in F1 and returned to his roots in advertising and commercial work. Obviously the book is first and foremost a record of its time: the cars, drivers, tracks, the very different conditions in regards to safety and also unfettered access; not to mention the absence by and large of sponsorship decals slathered all over cars, drivers, and tracks.

Like so many of the good photographers, Cooper hung out with the people he shot, building the kind of relationships that not only allowed him to get physically but also emotionally close. Candid shots of unguarded moments are plenty, and they, probably more than the racing photography are the really unique aspect of this collection. Photos of racecars in action are a dime a dozen but where else would you see Vic Elford wearing nothing but a fireproof mask and gloves? Humor was a quality Cooper possessed, and he saw it and brought it out, and then photographed it in others. No humor in this—there is even a photo of Louis Stanley, the BRM chairman and leading safety advocate who founded the Grand Prix Medical Service, in his mobile surgery.

While the overall theme of the book is racing, not all of the photos here fall into that category but show people or circumstances emblematic of the time and motoring life. Cooper had also been involved with three motion pictures, most notably Grand Prix and Le Mans, and one chapter covers that. Aside from short introductions to the various sections there is no other narrative save Parker’s captions which are very detailed, often witty, and convey great detail and even more sympathy for his subject. The style and presentation here are very similar to Parker’s highly recommended In Camera series of racing photography books. Many of the photos are full-page and all are well reproduced and printed on glossy paper.

Among the several people who contributed a page of reminiscences of Cooper is the artist Dexter Brown who also drew a portrait of Cooper specifically for this book which is shown on the last page. (Also see The Art of Dexter Brown elsewhere on SpeedReaders.info.)

A bibliography and a good index top off an all-around satisfying book. Parker hints at hundreds and hundreds of still unprinted photos in the archive. Maybe this won’t be the last book.