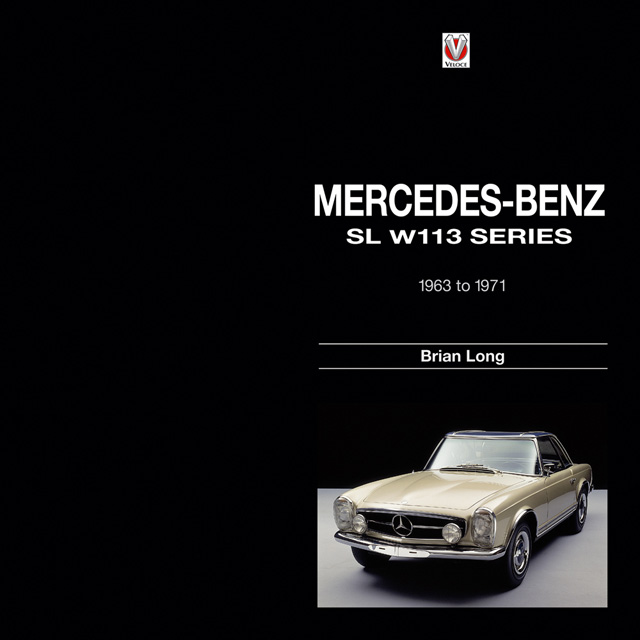 “Looking back, it’s hard to think of a series from any maker that shared the same moniker, but was so different in appearance and performance levels.”

Perspective is everything. . . . Today the W113 series with its squarish look is a desirable iconic motorcar, recognizable at a glance and often referred to as “timeless,” not least for its slightly concave hardtop that gives the car its “Pagoda roof” nickname. But when it was first launched at the 1963 Geneva auto show, the SL buyer’s visual vocabulary was solidly informed by the very different 300—a veritable cultural touchstone—and 190SLs, and the new kid on the block was received with skepticism.

The motoring press, on the other hand, recognized right away that Mercedes-Benz’s divining of the future had brought about just the right car, not only in performance and looks but also in creature comforts. It toned down the outright performance flavor of the “exotic” 300 and improved upon the “homeliness” (Long’s words) of the 190. Both series could have perfectly well existed simultaneously and complemented each other.

It is probably this particular aspect why this one book is really 1½ books. Over 60 of its 208 pages deal in quite some detail with the 300/190SL, explaining both its success and the factors that made its replacement inevitable. This discussion also considers the concurrent sedan/coupe series, W111, and the styling direction the W113 series derived from it and especially the 220SEb of 1959, another M-B with ever escalating prices nowadays.

As he does in his other model-specific books, Long devotes an introductory chapter to the early history of the company and its principals. These were fertile days so a number of automotive luminaries (cf. Wilhelm Maybach, Ferdinand Porsche) make an appearance. All this is on the brief side but sufficient enough to not only establish context but inspire the reader to whom all this is new to become interested in the bigger picture. Long, it should be said, is a trained mechanical engineer cum professional writer with over 50 books to his name. The quality of his work is such that auto companies happily cooperate with him, which means unfettered access to archives. Also, he lives in Japan and, no matter what car he writes about, seems to be able to source ephemera such as regional automobile ads that one just doesn’t see in other books.

The book covers in year order the 230, 250, and 280SLs in their civilian and rally guises, explaining design, development, mechanicals, specs, trim, color, market penetration, press reaction, and pretty much anything at all you could possibly think of. Photos are plentiful, often large, thoroughly captioned (but not individually credited), and show cars from most world markets. Period promotional material is reproduced extensively; this alone is a major draw in Long’s books.

Five Appendices present 1963–71 engine nomenclature/specs, a color/trim chart listing both the original German name and the English translation, optional equipment, and chassis numbers and production figures. The Index is on the brief side.

Despite the multitude of non-English proper names there are uncommonly few typos—which makes it all the more jarring that the one thing that is consistently misspelled is the very name of the car the book is about: SL = Sport Leicht, not Sport Licht!

Almost 50,000 of this second generation of SLs found buyers during its production run. If only 10% of them buy this book, Long will clear enough to continue on his chosen path—good for him, good for us. An earlier book covers the successor model, the 107 series of 1971 to 1989.

The ATL-98 Carvair: A Comprehensive History of the Aircraft and All 21 Airframes »
« Global Remains: Abandoned Architecture and Objects from Seven Continents